Skip to content
You are here: Killer Guitar Rigs > Feature > Asphyx – “It’s all about the riff and nothing but the mighty riff!” 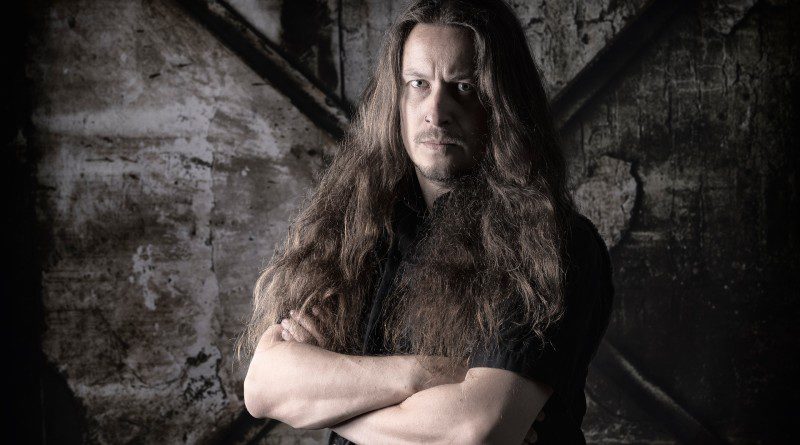 After ten albums over almost 35 years, you’d expect Asphyx to be phoning it in to an extent. Not so with new album Necroceros, wherein the Dutch doom-death legends deliver 35 minutes of their signature hoarse throated thrashing death metal along with two seven minute slabs of death influenced doom metal.

What makes this an even more impressive feat is that, these days, the bands contains no original members, yet still manages to continue evolving the band’s sound without losing what made Asphyx such a formidable force in the first place. Guitarist Paul Baayens joined the band after their reformation in 2007 and has steered the band’s riffs through three albums (2007’s Death… The Brutal Way, 2016’s Incoming Death and now Necroceros) that play on the band’s strengths (thrashing death and classic doom) while keeping the sound modern.

We caught up with Baayens to talk about writing for several bands at once, his distinctive Ibanez Falchion, and the almighty riff.

The new record sounds killer. How do you feel it fits into the Asphyx catalog?

Thanks a lot! We’re super happy how it all turned out.

The new record is in a way an extension of our previous work. Two new tracks are a follow up of songs on our previous album actually. I feel Necroceros has some dark and ominous edge to it. To me it captures the vibe of the more recent albums as well of older and the gloomy Embrace The Death album.

Actually it happens both ways. Sometimes I specifically write for one of the bands. For some riffs it’s quite obvious. I mean, when it comes to Siege of Power, it’s mostly all about the punky and crossover style, coming in short punchy songs.

For Thanatos the aggression and usually the high tempo is way more prevalent, however that feel slightly changed on the last album ‘Violent Death Rituals’.

Asphyx has a lot of Venom, Celtic Frost, Black Sabbath and old metal influences where sudden tempo changes are more than welcome. The mix of somewhat chaotic riffs and heavy doomy melodies are typical for Asphyx. Because I use for this band two stacks, sometimes during a soundcheck new riffs come up due to the huge wall of sound. Often drummer Husky kicks in and new ideas pop up right away.

But frankly over the course of years it happened before that some of the riffs seemed to be interchangeable. Because of a different way of songwriting and arrangements, riffs get an other feel. Every bandmember add his own flavour and style, so that a certain riff usually sounds completely different in the end.

Going into the studio, did you have any specific records in mind that you wanted to sound like or do you consider Asphyx to have its own sound?

Well, we weren’t totally set before creating our sound. That’s actually why we wanted to work with a different mixer this time. Over ten years I/we have been working frequently with Dan Swanö. It is always a pleasure working with him. He’s capable of coming up with a great sound and he caters to the different needs of every band.

This time we tried several mixers, because we were always curious how other sound engineers would approach the mighty Asphyx sound. Mix master Seeb Levermann was definitely to be a good fit. On this album Drummer Husky wanted more a live feel on this album by turning up the cymbals more for example and I had the actual live guitar sound in mind. There’s a bit less crunch and more definition in the guitars. In combination with the filthy bass we built a wall of guitar sound.

What gear did you use on this record?

Honestly, gear wise not that much. For recording demo’s and albums I plug straight in the interface, since everything is usually reamped later on anyway.

Last year I had to upgrade my software and switched from ProTools to Cubase Pro. Getting used to my new DAW and plugins slowed down my workflow at first.

For Asphyx’s latest album Necroceros I used mostly a Ibanez Falchion, which I use in live performances as well. Unfortunately they stopped manufacturing them, because this guitar is comfortable to play and somehow not expensive at all. For the D tuned song I always rely on my faithful Bc Rich Warlock Deluxe.

I tried several picks this time, from thinner ones for the clean part in Three Years of Famine to thicker picks for the faster tremelo picking, especially on the 0.59 string. When I perform I often use 0.88 custom made Dunlop picks.

Do you approach your album tone differently to your live tone, or do you aim to keep them consistent/recreate the live tone on record?

Not really, there should be a consistent sound. I feel very comfortable with the live tone I have now for all bands. Several years ago I had a nice 19” rack with effects, but after several times traveling by plane, I had to go for the less is more approach. For Asphyx I use the clean channel of a Peavey 6505+ and a handmade Earforce amp. The combination with my TightMetal pedal from Amptweaker always makes me grin. Simply love that thick, powerful sound.

For Thanatos though, and back in the days with Hail of Bullets, I mainly use the distortion of the Marshall 900.

The recording of the record was split between Tom Meier and your own Mörserstudio – was this to track drums at a larger room, or were there other factors? Did Covid throw any kind of spanner in the works as far as the recording?

The studio of Tom Meier is conveniently closeby and tracking the drums and vocals are laid back. With the album Deathhammer I started recording the guitars and bass in my own studio. I don’t have to schedule anything or rely on other people’s availability. When inspiration pops up, it’s super easy to record in my own studio.

Maybe for the process of Necroceros it was a bit helpful not having to do any shows. After recording about 6 songs I found out that the battery of my guitar was about to die, so in the end I had to do this all over again. Besides that, the whole process took longer than I hoped for.

What’s happening with Siege of Power these days? Can you see that band doing another record? Is it hard to keep a band going with members from both sides of the Atlantic?

We have actually written some songs. The writing process is a bit slow with Siege of Power though, which is partly due to the time consuming main bands we have. Bob Bagchus has several projects going on and vocalist Chris Reifert has his share of musical activities as well. So yeah, we don’t feel too much stress and pressure this very moment. Perhaps the boring lockdown time might give us a gentle push to the right direction.

You’ve been an Ibanez endorsing artist for some time – what is it about Ibanez that makes them your guitar of choice?

From the moment I started playing guitar I fell in love right away with the classy shape of the RG Ibanez. They just feel right, like a comfortable leather jacket. After performing on Maryland Deathfest in 2009 I borrowed an Ibanez Xyphos. With such a pointy wood guitar you just can’t look more metal than that. Haha. I end up buying various RG and X types of Ibanez.

You’ve been playing in death metal bands for a long time – are there any bands you think should have been huge that people could check out?

I don’t listen only to death metal. Recently I bought two albums of Swedish heavy metallers RAM, Diamond Head’s Lightning to the Nations 2020, Thin Lizzy’s Bad Reputation and Dio’s Intermission. So basically I am in a classic and heavy metal kick right now. Haha. I am very curious about the new release of the Swedish Dead Awaken, the upcoming Dutch thrash institute DeadHead and the German Desaster.

Finally, for someone who might not be familiar with Asphyx but wants to try learning one of your songs, could you suggest any good starting points?

I guess that will be Deathhammer, since that song has been covered by a lot of people and bands. If you want to go for more doomy melodies, then I would recommend Three Years of Famine of our latest album Necroceros. Asphyx isn’t exactly known for complex and virtuoso songs, so they should be quite easy to learn. Remember: it’s all about the riff and nothing but the mighty riff!