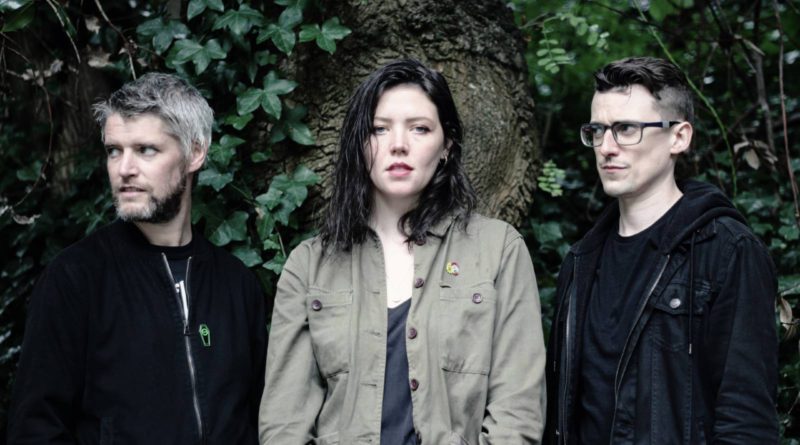 In late 2020, feeling a bit homesick, I made a post on an Irish message board asking what the best new albums out of Ireland were for the year. Almost every reply mentioned Staring at Clocks, the debut album by Dublin dream grunge trio Bitch Falcon.

Listening to lead single Gaslight, it’s easy to see why. The song is propelled by Nigel Kenny’s hypnotic drums and Barry O’Sullivan’s churning bass, over top of which singer/guitarist Lizzie Fitzpatrick stabs your ears with her guitar while layering vocal upon vocal to create an almost synth like backing. It’s truly something special.

Lucky for you, the rest of the record is no less rewarding. Sounding at times like Joy Division, at times like Babyteeth era Therapy?, the record is not only a musical treat, but also an absolute sonic landscape, courtesy of Irish production duo Deaf Brothers, all gelled together by Alex Newport (Death Cab For Cutie, Bloc Party, and Me First And The Gimmie Gimmies of all bands).

While we of course recommend checking out every band we cover, this is one you would be a fool to miss out on.

We caught up with Fitzpatrick to talk unconventional guitar techniques, amp walls and droning sixth strings.

Bitch Falcon has been a band for some six years now with a wide range of singles released over the years – why did now seem like the time to put out an album?

Well it has been a long time coming! We had reached a point where we were really happy with our writing and felt ready to write the album. In terms of pandemic, that was out of our control. Releasing an album is so far planned ahead so we couldn’t really pull it, and we didn’t feel the need to. It’s great to get it out there.

The sound on the album is gigantic – was that the intention when writing the songs, or was it something that came out of the time spent in the studio? Did the songs change much in the studio, or was it just adding embellishments?

There was definite intention to have the songs big, as we tried to have the same impact on the album as we do, or as people say we do, live. I think we went in with an open mind, excited to play around with what was in the studio. One of the producers, Rían Trench is an aficionado with synthesizers so I was excited to have that influence. We had a lot of fun playing with pedals and cheap synths to make some cool sounds that really make it for me.

Well we wrote the songs as a three piece, and they sound fairly big with just the three of us in the room. I think a live show that sounds a little different from the record is more interesting. I guess it would depend on the venue and budget. If we have a big gig with large production, it would be worth it to get other musicians in to make it a solid show, but if it’s a small gig, our more immediate sounds will sound as powerful.

Tell me about the gear you used on the record. I’m guessing the list of pedals is pretty long?

Yes, I am a big fan of guitar pedals! My main pedals would be my Fender Blender, Earthquaker Pitch Bay and TC Electronic T2 reverb.

Amp wise I use my Orange Thunderverb 50W, Marshall cabinet and my main guitar is a Fender Supersonic.

I had a lot of fun playing with reverb and feedback, with Robert Watson (SCAN) making my very own amp wall.

During the recording process I was able to layer lots of different notes’ feedback by tuning down my low E to a note that fit well with each song, so we could create a hum to gel the songs together.

How did you get hooked up with Alex Newport? I understand a number of people did test mixes – would you be able to share any names of other people in consideration?

We just sent his manager a request! Everybody’s gotta work. In terms of test mixing we asked a few people we liked in Dublin but the guys were fairly enthusiastic about Alex from the start so we held on for his reply.

I love how outside-the-box your playing is. Gaslight is a prime example – half the song you’re just hitting the guitar wide open without fretting anything, and in sections you’re playing the strings between nuts and tuners. Where do you draw influence for those kinds of things?

Thanks! Well the main riff in Gaslight is definitely influenced by Girl Band. Their style of playing has influenced a lot of guitar players in Ireland to think a bit more outside of the box! I guess I’ve always enjoyed guitar playing on the stranger side rather than super technical. I love Annie Clark (St Vincent), Ricky Gardiner (David Bowie) and Carlos Alomar.

Tell me about the dynamic between your guitar and Barry’s bass – one of the things that strikes me is that the bass in Bitch Falcoln is much less of a “backing instrument” than you would expect, both in terms of how chewy and present his tone is, and how the bass lines are also less “foundational” and more like lead lines. How does that influence what you’re doing?

I think Barry’s bass (lines) are really strong backing, but they lead the song melodically as well as holding a foundation with the rhythm. Barry’s bass allowed me to do whatever I wanted in the guitar front, I could add tones to make it sound sadder, more dreamy as his bass had the strength of both bass and rhythm guitar.

Finally, what are some other bands in Ireland that people should check out?