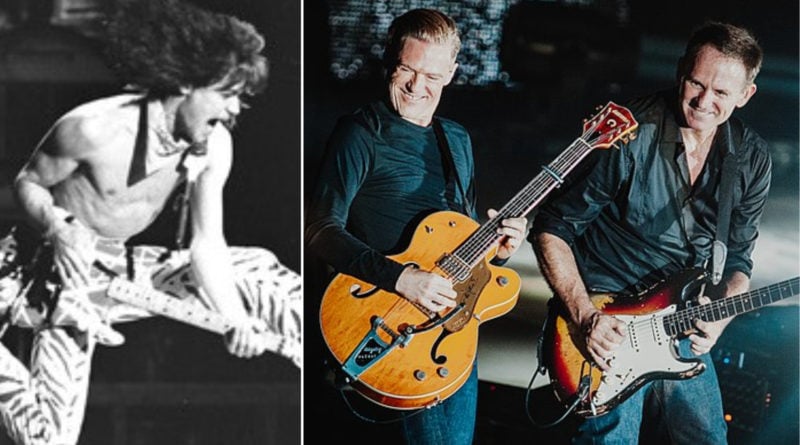 If you’re bored of “rock is dead” or “guitar is dead” statements, bear in mind that this is actually nothing new. In fact, people have been saying this for a few decades now. Nonetheless, our favorite instrument has improved and evolved in so many ways. And although not in the accepted “mainstream,” rock music also diversified and still keeps bringing new things. Sure, you may not see as many kids today getting fully immersed in it, but it has its huge following.

In a recent visit to the Mitch Lafon and Jeremy White show, Bryan Adams guitarist Keith Scott recalled the late 1970s, discussing Eddie Van Halen and these bold claims that the “guitar is dead.” The chat started with him being asked about Eddie’s reported comments naming Scott one of his favorites, to which he humbly replied (transcript via Ultimate Guitar):

“Maybe he got me mixed up with somebody else. No, I remember that he had said things… But he would come out [to the shows], and he was a fan. He loved Bryan, he loved his voice. And he was always so, so great. He’s just it’s just a normal guy… He was just really cool.”

“And I did hear about the comment in a publication that he said something about me. You know, I just thanked him for that, I think, at the time, which is the late ’80s. But he’s just a really nice guy, and obviously, we were a little intimidated because of his role in electric guitar in the last 40 years.”

Around that time, before Van Halen blew up, it wasn’t unusual to hear comments about the guitar’s demise. Scott offered:

“Because we have to remember, people were saying in the late 70s, ‘Guitar is dead.’ I remember Bruce Springsteen said something like that.

“And it came back with a vengeance. Things like Ozzy came out with Randy Rhoads; Eddie [Van Halen], and AC/DC ‘Back in Black.’ And it was like, ‘No, it is coming back to get you.’

“It really did, and it hasn’t gone away. You see kids on YouTube, 10, 12 years old and they’re absolutely shredding it, and doing really well. I guess that’s the biggest advantage, so much more information available at a young age, as opposed to when we started.

“We had to skip the record thing to get the notes, but now you’ve got a guy who’s written it all out in tab for you, everything you’ve ever wanted to know.”

Steel Panther Signer Tells Honest Truth Behind Bassist Leaving the Band, Opens Up on Replacing Him