Skip to content
You are here: Killer Guitar Rigs > Articles > Can I Play Fingerstyle On The Electric Guitar? 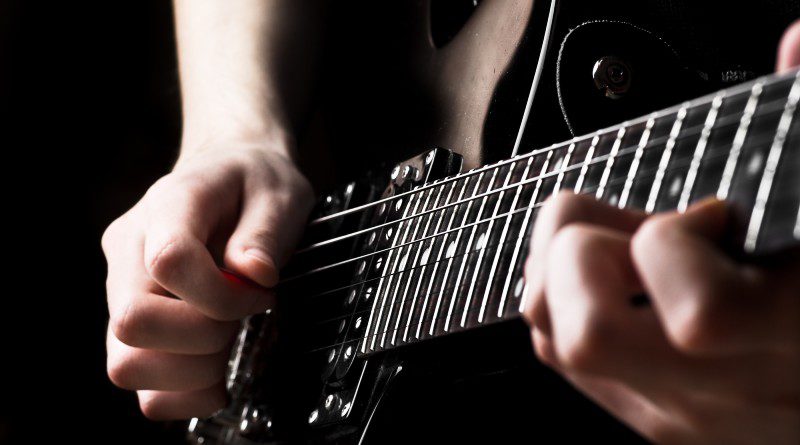 A common misconception is that fingerstyle, sometimes referred to as fingerpicking, is limited to acoustic guitar, and of course, this couldn’t be further from the truth – you can definitely play fingerstyle on the electric guitar!

In this KillerGuitarRigs guide you will learn:

Before we dive into the rest of the guide, let’s look at these fast facts:

Is It Easy To Play Fingerstyle On The Electric Guitar?

It is important to preface this section by stating that fingerpicking is a highly technical skill that takes time to master, with that being said, if you choose to start learning this technique on an electric guitar rather than on an acoustic, you might actually find that it is easier. Firstly, the lighter string gauge is easier on the fingers than the typically heavy acoustic strings, and as you’re using your fingers as picks, this will definitely be more comfortable. Secondly, the string tension on an electric guitar is lower than it is on an acoustic, another comfort increasing factor.

When playing fingerstyle on an electric guitar the technique should be the same as with an acoustic, that is, using your thumb for the bass side (E, A, and D strings), and your index, middle and ring fingers on the G, B, and high E strings respectively. When playing this style, your thumb plays downstrokes, while your fingers pluck upstrokes.

Do I Need Any Special Picks To Fingerpick With An Electric?

The short answer is no, you don’t need special picks to play fingerstyle. If you plan to play a lot of fingerstyle and don’t want to use picks, you may want to grow out your fingernails just a little. This is something a lot of fingerstyle musicians do in order to get a cleaner sound. Of course, you don’t have to, but remember that playing with the fleshy pads of your fingers will provide a much more muted tone and may require you to play harder to bring up the volume.

Alternatively, you can invest in a set of fingerpicks that slip over your fingertips and thumb. These are great for players looking for the kinds of extreme clarity that aren’t possible when playing with fingertips alone.

Playing with bare fingers does have at least one significant advantage over using picks, though – control. When playing with bare fingers, you have a much better feel for the strings, which will make it much easier to control volume and attack, letting you switch between warm and mellow, or bright plucking sounds. This is especially important when using light gauges such as those found on electric guitars because subtle movements are amplified way more on .09-gauge vs .12-gauge strings, making mistakes easily noticeable.

What Is The Best Electric Guitar For Fingerpicking?

Like anything else in the guitar world, there’s no one right answer. The best guitar for the job is the one that suits your genre and style of play the best. If like most people, you’re not able to buy a whole selection of guitars, try to find one that offers versatility through variations of pickups and tone and volume pots.

The guitars listed below are some of the most popular axes used by famous fingerstyle players.

The classic SSS Stratocaster is one of the most popular electric guitars for fingerstyle. The three single coil pickup layout and dual tone knob setup allows for an enormous tonal range, which is definitely helpful for varying your sound when fingerpicking. Mark Knopfler and John Mayer use their Strats to great effect when playing fingerstyle.

While mostly known for hard rock, the Gibson SG is also an incredible fingerstyle weapon. Tonally, it offers much of what the Les Paul does, but it offers significantly better ergonomics, making it more comfortable to play while seated. It also offers excellent string separation, making clean picking a breeze.

The Gretsch Streamliner is a great choice for an electric fingerstyle guitar. The pickups are low output, which keeps the mids and bass at bay, and this is helpful in ensuring note separation and ultimately clarity while picking.

The Tele is another extremely popular choice for fingerpicking on the electric guitar. Telecasters are famous for their twangy sound on the bridge pickup, and this allows for some incredibly unique tones when played fingerstyle.

Which Famous Fingerstyle Songs Were Recorded On Electric Guitars?

John Mayer recorded Heart of Life on a Fender Stratocaster. This was played in the middle position, and the tones were set about half way. The rest of the sound was achieved by playing clean through a Fender Super Reverb.

Mark Knopfler of Dire Straits recorded their hit song Sultans of Swing fingerstyle on his Fender Stratocaster through a 1960s Fender Vibrolux running a lot of treble, and surprisingly a zoom multi FX pedal for chorus.

Derek Trucks of the Tedeschi Trucks Band is a master of electric fingerstyle. Derek plays a Gibson SG with a Jim Dunlop glass slide through a Fender Princeton on this track.

Final Thoughts On Playing Fingerstyle On An Electric Guitar

Electric guitars are so versatile that there are very few styles that can’t be played on them. An acoustic fingerpicker transitioning to electric will, of course, need to make some adjustments to their style given the different string gauge and tension, but with a bit of practice can transition successfully. New players getting started on electric guitar and looking to play fingerstyle can get started right away with little more than a guitar, a cable, and an amp.

If you’re in the market for the best acoustic guitar strings money can buy – we have the answers. We tested as many as we could on our reviewers Martin OOO-15M – here’s the results!

Why do guitar strings break? 8 reasons and how to solve them!