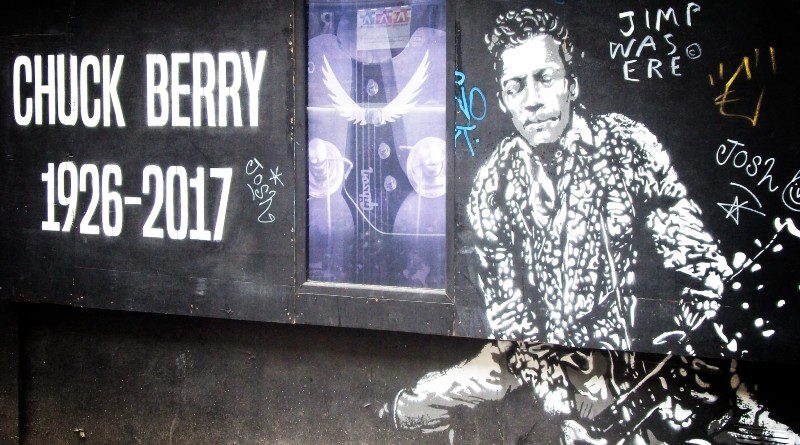 If you’ve ever wondered what kind of guitar Chuck Berry played on those famous chords of Johnny B. Goode, then we got you covered.

We dive into Chuck Berry’s guitar rig for the session and discuss the equipment that inspired a generation of guitarists.

We will also walk you through how to get the same tone at home, both on a budget of under $300, a more modest budget up to $1000, and a wallet busting combo of the finest guitar and amp money can buy.

Written in 1955, recorded and released as a follow up to Sweet Little Sixteen in 1958, Johnny B. Goode was a somewhat autobiographical song about an illiterate “country boy” who wailed on the guitar. The line was originally to be “colored boy” but it was changed to make sure it got on the radio.

Indeed the title itself is a reference to Berry himself, as he was born at 2520 Goode Avenue, in St. Louis.

The song was recorded January 6th of 1958 by Leonard and Phil Chess, the brothers behind the legendary Chess Records. Chuck played the guitar with Willie Dixon on the double bass. Though nobody is 100% sure who played piano or drums, either Lafayette Leake or Johnnie Johnson is believed to have played piano, with either Fred Below or Jasper Thomas on drums.

Guitar Used On Johnny B. Goode

In the early part of his career, Chuck Berry used either his 1957 Gibson ES-350T which was fitted with Gibson’s then-new P.A.F. humbuckers, or he used his 1956 Gibson ES-350TN which was loaded with P-90s. These two guitars were used on the majority of Berry’s Chess Records output. Of course it’s near impossible to say which would have been part of the Chuck Berry guitar rig on the day, though it is believed to have been the former.

One of Berry’s biggest fans in his early days was a little known British guitarist named Eric Clapton – ok, maybe not little known.

Clapton bought an ES-350TN as a tribute to Berry and even played it with him in concert in 1986, hoping to impress his idol with the guitar. However he later revealed that he didn’t think Berry even noticed what guitar he was playing.

Not long after the song was recorded, Gibson released the ES-335, and it was that guitar that Berry was most associated with for the remainder of his career.

Prior to using a Gibson, Berry was known to use a Kay Thin Twin K161 which was a semi-hollow made from 1952 to 1959. The guitar was commonly known as the “Jimmy Reed” guitar as Reed was pictured with one on an album cover. The thin blades on the pickguard head to two thick single coil pickups.

While it’s not known the specific amp Berry used on the recording, he was long known to have played Fender amps. In Fact, it was said that he would refuse to play a show unless provided a Lincoln Town Car and a pair of Fender Showman Reverb amps.

And the rest is history…

Johnny B. Goode didn’t exactly set the charts on fire, peaking at number 8 on release. However, it went on to be considered the quintessential late 50s rock and roll song. This would lead it to being covered by everyone from The Beatles to The Sex Pistols.

Indeed, when Berry was inducted into the Rock And Roll Hall Of Fame in 1986, he played Johnny B Good, backed by Bruce Springsteen and the E Street Band.

The song itself was inducted into the Grammy Hall Of Fame in 1999 due to it’s influence over rock and roll as a whole.

Berry himself was even immortalized in film – and of course the movie poster was of him duck walking with his 335.

Was Chuck Berry Buried with a Red Gibson Guitar?

Chuck Berry died on March 18th, 2017 at the age of 90 after going into cardiac arrest in his Missouri home. Police were called to the scene where he was found unresponsive, and he was pronounced dead by his personal physician.

As the music world mourned, Berry’s funeral was held April 9th, 2018 at The Pageant, a music venue in the Delmar Loop area of his hometown, St. Louis, Missouri. In a private service that followed the public viewing, Gene Simmonds of Kiss gave an impromptu eulogy, though a scheduled performance by Little Richard was cancelled due to illness.

“I hadn’t planned on coming saying up here and saying anything,” Simmons said, as he took to the podium. “These shades are going to help me a lot, because in the back of them are real tears.”

The night before the funeral, bars across the city held a mass toast at 10pm to the memory and legend of Chuck Berry.

At the funeral, Chuck was laid for the viewing with his red Gibson ES-355 bolted to the inside of the lid of his coffin. The guitar is thought to be the 1964 model that he toured with for about 12 years of his career, though it’s believed it was not Lucille as that is a darker red color.

That being said, many believe the guitar was just for show, and not ultimately buried with him when he went into the ground – but that’s a secret only a few are privy to.

How To Get The Chuck Berry Tone

If you want to emulate that classic tone, you have no shortage of options.

While of course we’re going to suggest some of the combos that will get you there, be aware that there are several software options. Fender has many profiles available for their modelling amps, aiming both at a 57 Champ sound and a 59 Bassman sound.

There are also some Line 6 Helix profiles available online that will get you up and rocking in no time.

Of course none of that is any use unless you try to get the man under your fingers – and there are many many videos to walk you through that.

Finally, if you’re looking to get the notes for the song itself, there are a ton of options from Songsterr tab to a ton of lessons by all your favorite online teachers.

All that being said, if you want to go analog and get the tone the good old fashioned way, we have you covered.

You don’t have to put down crazy money to get your fingers singing the man’s music. Remember, back in the mid 50s, electric guitars were still pretty new, and the processes to make them could be pretty rough.

Nowadays, we have factory made guitars that will give you similar quality for a fraction of the price.

If you’re looking to rock out on a shoestring, we suggest pairing a Grote Semi-Hollow (in cherry red – could it be any other color?) with a Fender Champion 20 or a Mustang I V2.

You might need to do a little work on the Grote, but it comes from the same people who make those Firefly guitars that have been setting the internet on fire for the last couple of years.

If you’re someone who has slightly more refined tastes, you have a much wider range of options. There are a ton of semi-hollow guitars in this price range that sound like a ringing bell. Ibanez, Gretsch, Godin and many others make killer guitars for under $1000.

But let’s be real – we both know you’re going to get yourself an Epiphone ES335 Pro in Cherry Red.

Amp wise you’re looking at a new Champion 50 with some money left over, or you’re scouting yourself a killer deal on a Blues Jr – but whichever way you slice it, you’ll stay with Fender.

When money is no object (hello blues lawyer), you put down $3700 for a Sixties Cherry Gibson ES-335 with the figured top, and another $1000 for the Fender 65 Princeton – and you play your little heart out.

Don’t forget to check out the other entries in our “famous guitars” series.