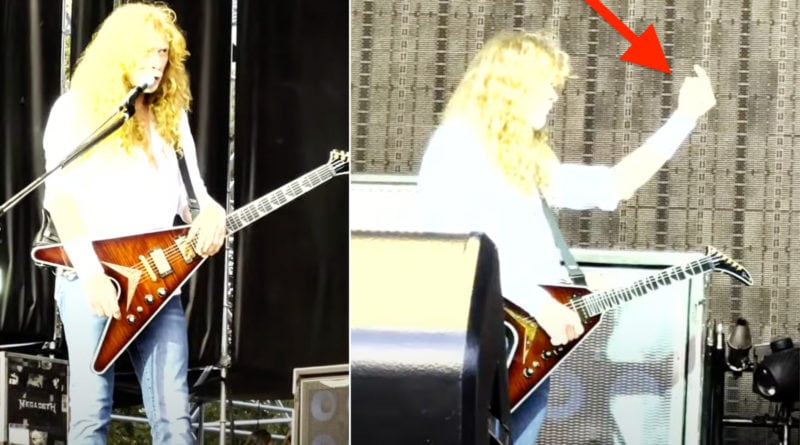 We know that Megadeth leader Dave Mustaine has a bit of a personality. Despite his immense impact on metal music, he’s still (in)famous for either controversial statements or just lashing out at those around him.

Well, that’s actually what happened at Megadeth’s recent performance over at Spain’s Barcelona Rock Fest on July 2, reports Metal Journal (via Blabbermouth). Dave and the boys were six songs into their set. During that time, Judas Priest’s crew was doing a sound check over at the second main stage. Unfortunately for Megadeth, you could hear the sound interfering with their own show, which made Dave visibly annoyed.

So the Megadeth frontman stopped the show and addressed the audience, saying:

“We’ll wait till he’s done checking his guitar over there.”

After waiting for a while, Dave showed his middle finger in the direction of the second stage, with an overwhelmingly positive reaction from the Megadeth crowd. Going back to the microphone, he added:

“The last night of the tour — we went all the way to the last fucking night, and then some pussy over on the stage next to us has to start playing while we’re playing. How fucking pathetic, amateur piece of shit you are.”

After another brief break, this time a shorter one, Dave added “Can we proceed now?” and finished his speech by adding:

After that, Dave announced “Symphony of Destruction,” although the band waited a little more before getting to the song. You can check out the incident in question in the embedded player below at around the 9:15 mark.

Recently, Megadeth has announced their new album “The Sick, The Dying… And The Dead!” which is planned for September 2 release. So far, they’ve released a single titled “We’ll Be Back” which you can check out below.