Skip to content
You are here: Killer Guitar Rigs > Feature > Desaster – “I’ve used the same equipment for over 30 years now” 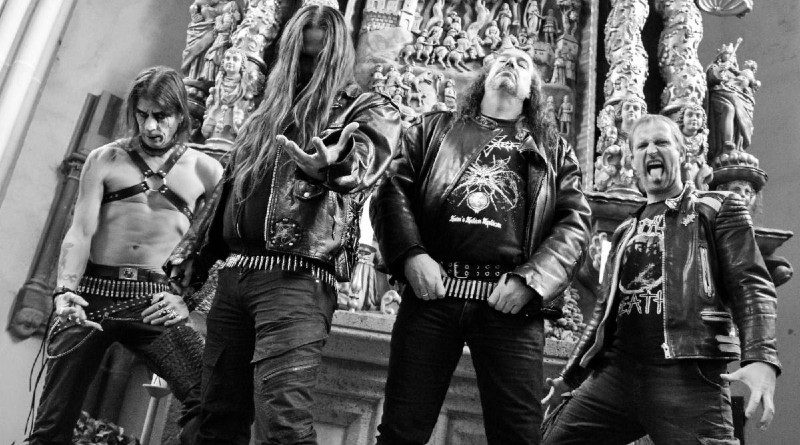 Long into their career, Germany’s blackened thrash mainstays Desaster have decided to take a step back production wise in serving up their new album Churches Without Saints. While everyone else is trying to sound as digital as possible, Desaster sound like your old Slayer records – a real band in a real room making a kick-ass noise.

We caught up with guitarist Infernal and drummer Hont to talk about the new album, simple guitar setups, and revisiting old records.

The new record is incredible, but interestingly it feels less “polished” or modern than your more recent albums. What was the thought behind this?

Hont: Thank you very much for the nice compliment.

All of us in the band like not so much the modern productions. We are old farts who grew up with authentic productions. That’s what we really wanted to do.

It should sound warm and raw at the same time. That’s why we recorded in the rehearsal room with our live mixer Janosch. Infernal then prepared the respective mixes with Janosch and worked on them until everyone was satisfied.

It is clearly better if the whole band is not present during the mixing process…hahaha. Once the basic sound was found, it went relatively quickly until all the mixes were done.

Hont: Not really. There are certainly a lot of albums with a fantastic sound that we can agree on within the band.

But it’s the wrong approach. Find your sound in the rehearsal room and try to bring it on Vinyl. That’s what we wanted to do. In addition, Infernal has been finding its signature sound for years.

You recently had a change on the drum stool with Tormentor leaving after some 25 years, replaced by Hont. How did that come about, and how was it working with Hont on the new album?

Hont: Tormentor was still playing with Sodom and Asphyx at that time. This meant that he had not enough time for Desaster. But Desaster is a band that wants to meet often in the rehearsal room.

I have a musical past and present with Sataniac. He suggested me and after the first test rehearsal it was clear that it would fit.

It’s an indescribably great feeling to play with the guys and it was exactly this feeling that led us go to new songs. The songwriting was really satisfying. The riffs of Infernal are so fantastic – you just can’t fuck that up as a drummer…hihihi.

We had a lot of fun and just let ourselves drift.

How did the band deal with the lockdowns in 2020? Did you guys end up spending more time on the record than you might otherwise have?

Hont: The lockdown was not pleasant for any musician. I don’t think it influenced the songwriting. We are resistant to everything….hahaha. We practice regularly anyway, and since we are not a band that sends mp3 files to each other to work with – covid had no influence on us.

Luckily the album is coming out as things are looking like they will reopen soon, but were you guys at all slow to put out a record that you can’t immediately tour behind?

Hont: No, not at all. We are not a touring band anyway.

One of the reasons why Destaster has been around for over 30 years now is that they have never submitted to the laws of the music business. We only play selected shows and keep the special feeling of driving to a show and partying with the fans.

The band has always released albums independently of booked live shows, but of course it would be nice to play shows again – we miss that a lot.

Infernal: I use the same equipment for over 30 years now: My old Ibanez RG 550 left hand guitar, Hiwatt amplifier from 1974, Marshall Speakers, Metal zone distortion pedal and a digital delay. That’s it!

Infernal: I’m an old school guy, so this modern stuff is absolutely not my cup of tea!

For someone who’s just discovering Desaster and wants to hear more music that sounds like you, what bands would you suggest they start with?

Hont: As an example – the last albums of e.g. Asphyx, Necrovault, Necrot or Blackevil were very cool. But of course these are only a few of many. There is always a lot to discover in the metal universe.

Often you discover albums from the past that you completely overlooked at the time. This happened to me most recently with Asphyiator – Trapped Between Two Worlds. I only became aware of the record through the re-releases. What a brilliant record….. but I digress….hihihi Sorry.

Hont: I think Evil Arschloch is the most complicated song. If you have that song – you can play everything else from Desaster…..hihihi

Infernal: Harhar, Hont! Seriously, I would recommend the song “Porter of Hellgate” from our first album, you can find the tabs on the internet and I saw some beginners playing along that song quite good!

My technique doesn’t change much during the years, only the speed has been increased, so advanced players should try to play “The Cleric’s Arcanum” from the last album “The Oath of an Iron Ritual”! This song is a real challenge for me playing live when the drummers even play it faster than on record!

Hont: We just hope that we can play shows again. otherwise we just do what we always do – rehearse, drink beer and have fun.

And who knows maybe the songwriting satan will come by the rehearsal room and force us to write new songs….hahaha.

We caught up with guitarist Infernal and drummer Hont to talk about the new album, simple guitar setups, and revisiting old records.