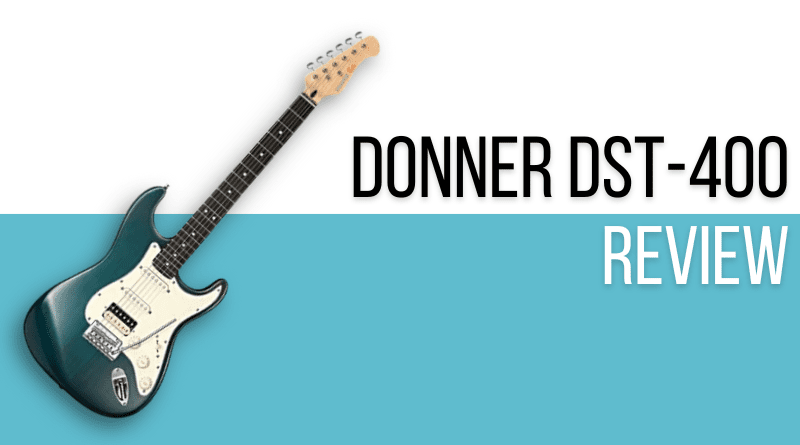 Donner’s rise to prominence continued in a big way with their large stand at this year’s summer NAMM, where they unveiled a whole slew of new products including some new guitars.

One such model was the Donner DST-400 – the flagship model in their lineup. Donner did provide us with a guitar for this review, but all thoughts and opinions of the guitar are our own.

We recently reviewed the mid range DST-152, so we were keen to find out whether or not this supposedly upgraded version offered any tangible benefits for the additional cost. Keep on reading to find out.

Despite being an upgraded guitar, we still feel that the Donner DST-400 is aimed at beginner to intermediate players, even though Donner claims that it’s aimed at pros. We added intermediate here mainly based on the fact that this is not a full kit, and you would either need to already own, or separately purchase an amp to get going.

We were once again impressed by the quality of the fit and finish. It arrived in a well protected box, and every component of the guitar was individually padded with Styrofoam to ensure safety during shipping. It even came wrapped up in a (lightly) padded gig bag.

It had a nice translucent green finish that showed off the attractive grain on the alder body. It’s also available with a translucent black finish, too. The alder was definitely an upgrade from the poplar on the DST-152, and provided better resonance and sustain, without any real additional weight.

The c shape maple neck was comfortable, and had a noticeably better finish than the lower tier models. It was smooth with a satin finish, and played very nicely. As expected, the laurel fretboard was very dry, so at first the finger feel was far from ideal. In this case we did condition it, and were satisfied with how it came out afterwards. The fretwork was good, too, with no sharp edges. We did observe that some sprout had been ground down on the bass side, but this is a good indication that the QA at Donner’s plant is working like it should.

The hardware was the most significant upgrade for the DST-400. It was chromed steel rather than pot metal, and it also had a more modern 2 point trem system. It’s worth noting that the vintage style tuners were identical to the DST-152, though. It had a humbucker in the bridge, and single coils in the neck and middle positions, and as we’ve seen on other Donner S Style guitars, it had coil splitting for single coil tones from the bridge.

The fit and finish upgrades on the DST-400 are absolutely worth the $60 upgrade over the mid tier model. It felt comfortable, and offered solid playability that would work with a student player, not against them.

It had a nice low-mid action, which felt really good. It didn’t cause any discomfort, and most of all didn’t require any immediate adjustment, which is something we often find is necessary on budget guitars. The neck was arrow straight, and the nut, while still not exactly GraphTech quality, was adequately cut, and didn’t cause any issues with intonation or tuning stability.

The trem system was a double edged sword for us. It did get a solid steel block, which was a massive upgrade and really improved sustain, but the 2 point system did little to solve the tuning stability issues caused by anything more than moderate use. The tremolo arm itself was a pop in type rather than the screw in, which was also nice to see.

We’d anticipated that the pickups might also have been upgraded, but in reality, they were the same, albeit with the chrome cover removed from the humbucker to reveal a zebra style humbucker. Fortunately, this wasn’t a bad thing, we enjoyed them as much on the flagship model as we had done before. We got good warmth and rich tones from the neck, with great articulation.

The middle pickup, as before, wasn’t particularly prominent on its own, but it did assist in giving us some nice quack in the 2 and 4 positions.

We really liked the bridge humbucker in dual coil mode. It was hot, but it kept its composure when driven, with some nice bright lead tones. With coil splitting engaged, it was a little thin sounding, but regardless, coil splitting is still a fantastic feature to have on a sub $300 guitar.

We can see that Donner is really trying hard to produce a decent guitar. This isn’t just throwing parts together and hoping they don’t fall apart – it’s clear to see that this is a company that cares about building a brand and a customer base; the NAMM booth was a big hint about this goal.

The Donner DST-400 Offered some great incremental upgrades over their previous models, and while it’s not a perfect guitar, the additional cost is so minimal that it’s definitely worth pushing your budget up to this model if you’re serious about a Donner purchase.