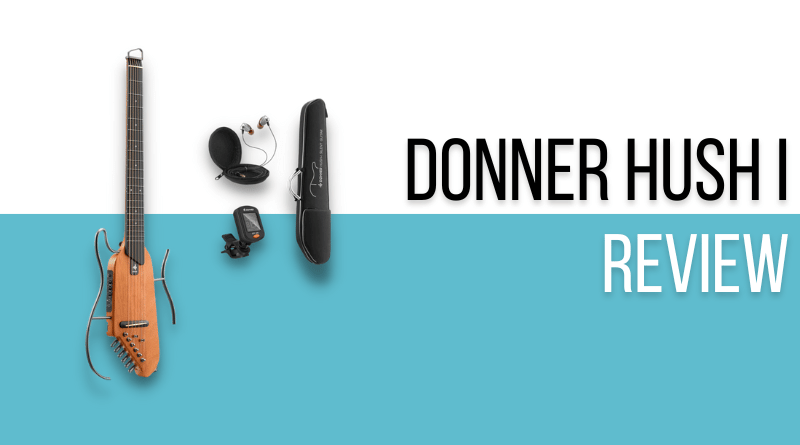 Donner made a huge splash at the 2022 NAMM, and introduced some unexpected models and demonstrated their commitment to moving from little known budget brand, to being a serious player in the affordable instruments sector.

One such product announcement was the Donner Hush-I, a “Silent” guitar designed with portability in mind. This was one of the more unusual guitars we’ve ever had on the test bench, and in all honesty, we didn’t think it would be a particularly great player when we saw it online for the first time – but how wrong we were!

In this KillerGuitarRigs Review, we’ll be sharing our thoughts on the Hush Silent Guitar having spent a couple of weeks getting to know it. Donner sent us a Hush-I for review purposes, but as always all thoughts and opinions are our own.

The Donner Hush-I is a highly compact travel guitar, and is ideal for players on the move. Its unusual shape and the fact that it technically needs to be put together at home really make it more of an intermediate and above kind of guitar, as the ergonomics won’t lend themselves well to a newer player.

Its built in amplifier and practically silent performance also makes it a great option for players who want acoustic tones, but who also want to be able to practice without disturbing anybody else.

The Donner Hush looks a lot like a kayak paddle thanks to its headless design and oar shaped body. It’s not until you take the metal rails out of the bag and bolt them in that it really looks like a guitar.

It had a solid mahogany body, and a solid mahogany asymmetrical neck. The grain actually looked very nice, and felt like Donner had put some effort into wood selection. It had what Donner called an HPL fretboard, which was a lot like the Richlite that Martin has been using for some time. We think it actually felt good, and we don’t think it impacted performance or tone in the slightest.

As for hardware, it had open gear tuners, which technically require an allen wrench to operate. The keys had a knurled finish, so if you’ve got the finger strength, you can probably make adjustments without the allen wrench, but we don’t think we’d recommend it.

The electronics were one of the most interesting things about this guitar. It had an undersaddle piezo transducer, connected to an on board headphone amp. If you want to play through a regular amplifier, that’s possible too thanks to the standard ¼” outlet jack.

To get it out there, we thought that this guitar took a lot of getting used to. We’ve not seen or played anything quite like it, and we know it’s not going to be for everybody.

Without the rails installed, it was an extremely difficult guitar to play. The neck dive was crazy, and the overall balance was way off. It also didn’t help that it was very difficult to get a strap opening around the jack, strap button combo. Things changed quite drastically with the rails on, though. It improved the balance and ergonomics, and actually made it quite comfortable to play.

The asymmetrical neck was excellent. We found it comfortable from top to bottom, and we think Donner has perhaps listened to some of the early feedback – The earliest reviews reported extremely high action, but we found that it was fairly typical of an acoustic guitar, with low to mid height.

Not only was the neck great, but the fretwork was unbelievable. We don’t like to speak in superlatives, especially about budget guitars, but the quality of the finish was far in excess of what anyone would expect of any guitar at this price point. The edges were fantastic, and the crowns had a mirror polish on them.

Tonally, it sounded much like you’d expect any acoustic electric guitar to. When played with the on board amplifier and the bundled headphones (which were of excellent quality), it sounded full, and actually very bright. You’d never mistake it for a pre war Martin, but for the average user, the sound quality was great.

Through the output jack we got much of the same performance. The electronics are active, so note that you do need a battery installed even to be able to use the standard output jack.

It was extremely focused through the mid range and had a lot of shimmer at the top. THe on board preamp had a 2 band EQ for sound shaping, too, so we were able to give it a bit of bottom end punch, too.

Final Thoughts on the Donner Hush-I

Overall, the Donner Hush-I was an extremely interesting guitar. We found ourselves genuinely impressed by the fit and finish, and loved that everything came neatly packed in a custom fit case. It’s made a case for itself as a real contender in the travel guitar market, and really furthers the case for Donner to be taken seriously in the industry.

We loved the tones from this guitar, and besides a couple of minor gripes like the need for an allen key for practically everything, it really is a great option for anybody looking for a quality travel guitar.