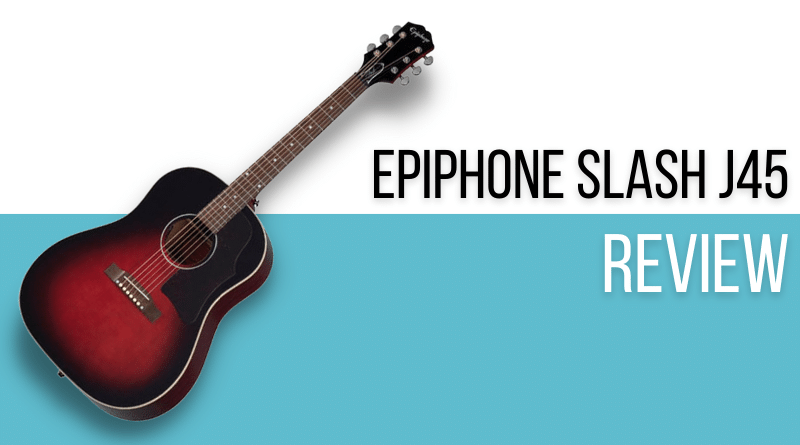 The Gibson J45 has long been the preferred acoustic guitar of Slash, spawning a signature model back in 2020 – but of course, being a Gibson signature model, it was well beyond the budgetary constraints of the majority of players. Enter the Epiphone Slash J45.

Introduced as part of the “Inspired by Gibson” range, Epiphone released a more affordable version of the iconic J45 Slash Signature in order to get it into the hands of more players.

In this KillerGuitarRigs Review, we spent some time with the Epiphone Slash J45 to see if it really lives up to the name it’s been given. If you’ve been interested in learning more about this model, this is a review you won’t want to miss.

The Epiphone Slash J45 is genuinely well suited to players of all levels. With a retail price of around $1000, though, it might still be out of reach for players on a tighter budget.

Regardless, if you’ve got the cash to spend, it’s an extremely comfortable guitar designed with the ultimate in playability in mind. It’s balanced and more than suitable for studio use, and it’ll hold up well if you plan to gig with it.

Without looking at the headstock, we were sure we were looking at an actual Gibson model. Epiphone absolutely hit this one out of the park aesthetically speaking. The finish on the Vermillion Burst was sensational, and the slope shoulder design was absolutely spot on.

Construction wise, it had a gorgeous solid Sitka spruce top, which we find is quite standard at this price point. As for the back and sides, Epiphone built this model with mahogany, just as Gibson did with the flagship version.

The neck was solid mahogany, and came in a rounded C profile, just as per Slash’s specs. We found the neck to be extremely comfortable, and genuinely quite forgiving, which made more complicated chords just that little bit easier to play.

Hardware-wise, it was a step up from the typical Epiphone. It had genuine Grover Rotomatic tuners which performed well, and looked fantastic in the process. The nut and saddle were both made with Tusq, too, for exceptional resonance, sustain and intonation.

Another feature that justifies the price difference between this and the standard J45, which retails for around $250 less, was the use of a high end LR Baggs VTC pickup system, which is the same as you’d typically find on a more premium Gibson model, vs the Fishman Sonitone found on the regular J45.

To top it all off, it came with a fantastic Slash branded hard case, which would easily be a $150-200 buy on its own.

The Epiphone Slash J45 really does sound as good as it looks. We really put it through its paces across a number of genres and playing styles, and it didn’t falter one bit.

It was made with a 24.75” scale, which really helped the playability significantly. It had just the right amount of string tension, which allowed for easy note bends and effortless lead playing. The only improvement we think could have been made here would have been a cutaway for upper fret access.

When played as a rhythm guitar it had a fantastic, almost growl-like voice. It really did well as an accompanying instrument for a vocalist, providing enough texture to stand out, but not so much as to steal the show or wash out the rest of the mix.

With fingerstyle playing, it came to life once more. It was bright and articulate, especially when picked hard, and with a softer touch it mellowed out significantly. In a blind test, we think even advanced players would have a tough time differentiating this from the Gibson equivalent.

Being a dreadnought, it still had the big bottom end that players look for in this style of guitar, too. All in, the tones were beautifully balanced, and the versatility it displayed when changing styles, or even just with changes in attack was astounding.

We were impressed with the amplified performance, too. The LR Baggs VTC electronics did a superb job of capturing the organic acoustic character of the guitar. For this reason we think this would be a real weapon in the studio, and especially on stage.

The Epiphone Slash J45 is an outstanding acoustic guitar, but we understand that some players might not feel comfortable spending Gibson money on an Epiphone. If this is the case, or you’d simply like to check out some other options before making a decision, we’ve picked some of our favorite alternatives below.

The Gibson G45 costs only marginally more than the Epiphone, and comes with the brand pedigree that many are looking for. It has an incredibly similar feel to the Epiphone, too, primarily due to its slope shoulder dreadnought body.

Tonally, the G45 is a little brighter than the Slash signature J45, and this is down to the use of walnut on the back and sides in place of mahogany. It does also boast a slightly slimmer neck, using the Gibson Advanced Response profile, which players with smaller hands will no doubt appreciate. In addition, it features the new Gibson Player Port, a secondary soundhole built into the side of the bass side bout, a feature designed to give the player a more authentic idea of what the audience would be hearing.

The Taylor 114ce is a phenomenal all rounder that is suitable for players of all abilities. It has an incredibly comfortably Grand Auditorium body shape, so while it does lose out in volume and projection over the Epiphone, it does gain comfort and ergonomics, so if this is a big factor for you, the Taylor might be a great choice.

Tonally, it’s an exceptionally bright guitar, with tons of top end sparkle, and incredible fingerstyle performance. Its solid Sitka spruce top and walnut back and sides contribute significantly to the brightness, but it still has some great mid range punch, and the Taylor ES2 electronics are top performers, too.

The Epiphone Slash J45 is one of Epiphone’s flagship import acoustics, and the care and attention to detail that has gone into building it are absolutely apparent. It’s well appointed, and looks almost indistinguishable (bar the headstock) from the Gibson. While it may feel expensive “for an Epiphone”, when you consider the performance level, the price starts to make sense.

Tonally, it was a brilliant guitar, with the ability to switch from warm and mellow to sharp and aggressive in the blink of an eye. It was a lot of fun to play, and considering it’s less than a third of the price of the Gibson, it really does warrant some consideration if you’re in the market for a quality acoustic.