Skip to content
You are here: Killer Guitar Rigs > Feature > Escape The Fate – ‘Whatever Gets The Job Done and Sounds Great’ 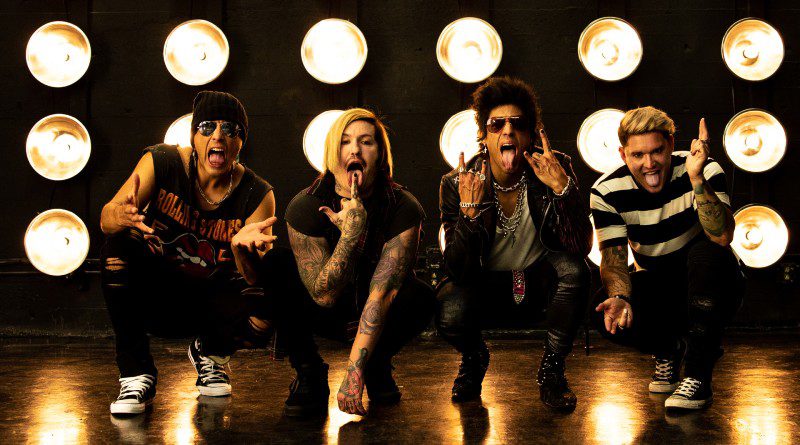 With their recently released 7th album, Chemical Warfare, Escape The Fate are taking the approach of “if it ain’t broke, don’t fix it”.

Sure they may have dialed back the heavy parts a little and brought their pop side a little more to the fore, but Chemical Warfare is going to feel familiar to fans of the band as it showcases all of the songwriting hallmarks of the band’s previous efforts.

We caught up with guitarist Kevin Thrasher to talk about the record, the band’s recent robbery, and using the best musical tools for the job.

You guys got most if not all of your stuff stolen from your storage unit in late February – my sincerest condolences, that really fucking sucks. Has there been any progress in getting your stuff back?

Yes, this absolutely sucked! We haven’t gotten anything back. For me, it was mainly my touring guitars. But I have a large collection at home and at my studio.

Obviously a lot of personal belongings were stolen too, but music gear wise, anything irreplaceable?

Nothing too irreplaceable —  just sentimental value on some items. Such as guitars I’ve had for over 10 years.

What has your approach been in terms of rebuilding the band’s gear for future tours and such?

It was just an excuse to get more guitars, LOL!

Onwards and upwards to the record, Chemical Warfare, which is the band’s seventh record by my count. What should fans expect to hear on the new album that they haven’t heard from Escape The Fate before?

The fans should expect to hear some new songs, a different type of production, and a growth in our writing.

Were you guys at all slow to put out a record right now that you can’t immediately tour behind?

We were a ittle bit slow to release this record but we finally are releasing it this week and are pumped.

The amazing Travis Barker guested on recent single Not My Problem, how did that come about? Any other guests we should expect to hear on the album?

We have Travis Barker on drums for ‘NMP’ and it turned out incredible. He’s a great collaborator and really knows how to serve the song with iconic drum parts.

I used a bunch of Fender guitars, which I haven’t used on previous albums. There was a Jaguar and a Jazzmaster in the studio that I used almost on every song to double or quad stack guitars. I found they gave a new flavor and had a bright fresh tone. Also, there was a Schecter Baritone I used on a lot of parts to heavy things up.

I usually don’t reference too heavily when I’m in the studio recording, unless I’m thinking of a particular sound. My workflow is so fast and runs off inspiration so I kind of make a mess and pick up every instrument and lay things down.

Yes and no. I’m a record producer and audio engineer, so I love to tweak sounds and discover new things to add to productions. That being said, I feel like I can make amazing albums with little gear. Recently, I’ve been using a big muff.

Totally, I have my own plug-in pack with STL TONES called TONEHUB. I used it a lot on the new Escape the Fate record and the Machine Gun Kelly album Tickets to My Downfall. I’m not afraid of embracing technology. I love Kempers and plug ins. It’s whatever gets the job done and sounds great.

They could check out a few different things. I would suggest getting a teacher, as that would give them quickest results. I have a YouTube channel called Thrasher Guitar TV, where I frequently post lessons. There’s a lot of material out there for sure.

Up next for the band is just releasing this new record and creating some content We are really excited to launch this new album. After ‘rona, we will possibly play some shows;)

Can I Play Bass Through A Guitar Amp?

Most people will tell you playing a bass through a guitar amp is going to blow the speaker – but that’s not always the case. We go through some of the things to think about if you’re in a pinch with only a guitar amp.