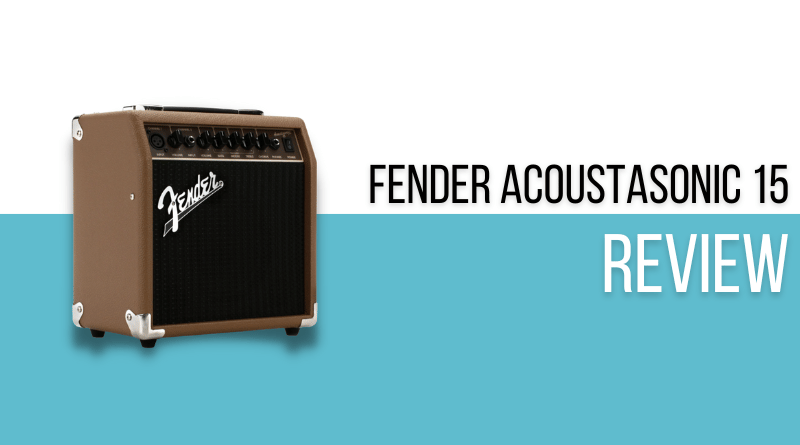 In the past, many acoustic players have had to make do with standard guitar amps when they needed amplification, and while for the most part they do just fine, if you really need pure acoustic tone that isn’t colored by circuitry and speakers designed for electromagnetic pickups, using an acoustic amplifier will make a world of difference.

While traditionally the availability and selection of acoustic specific amps has been limited, we’re now seeing a huge number of awesome models to suit all budgets hitting the market. Take for example, the Fender Acoustasonic 15 – this is a fantastic combo amp that’s perfect for practice and small gigs, and it costs less than $150!

In this KillerGuitarRigs Review, we’ll be covering the Acoustasonic 15 in detail. We have already had an opportunity to review it when we named it our best budget pick in our roundup of the best acoustic amplifiers, but in this extended review we’ll be bringing you even more info on this fantastic amp

If you’ve been looking for a quality acoustic amp that won’t break the bank., you won’t want to miss this.

Fender Acoustasonic 15: Who Is This For?

The Fender Acoustasonic 15 is primarily designed as a practice amp, but we think it would actually work well for small gigs, too.

It’s a great choice for players of all abilities. It’s user friendly, so newer players will have an easy time setting it up, and for players who are getting into performing live, it even has the ability to act as an actual PA.

Fender has designed the Acoustasonic 15 in a way that makes it clear that it’s an acoustic amplifier, besides the name of course, it’s finished in a brown tolex, which is a color used by the majority of manufacturers for their acoustic amps.

The amp itself is physically one of the smallest acoustic models on the market. At just 10.5lb, it’s extremely light weight, making it incredibly portable – great news if you plan to take it with you to a performance.

It’s a solid state model with 15 watts of power, giving it surprising punch for a small amp. The 6 inch speaker has a full range response, and includes a specially designed whizzer cone designed to improve the high frequency tones.

There were 2 channels, one for a guitar input, and another XLR input for a microphone. Each input had its own individual volume control, which really gave the useability of this amp a boost.

As for EQ, it’s very well equipped for a small amp. It features a full 3 band EQ with bass, middle, and treble, allowing for fine detail in sound shaping, and to add texture to your tones, it features a chorus effect.

If there’s one thing you want in an acoustic amplifier, it’s an organic reflection of the guitar’s natural tone, and with this baby Acoustasonic we found this in spades. Despite being so small, and having such a small speaker, we found that it handles the bottom end of a full size dreadnought exceptionally well – something we weren’t expecting at all.

It sounded excellent in the mid range, too. It had plenty of punch, which ensured strong projection while not overpowering the vocals.

At the top end the whizzer cone really made a big difference. It’s so easy for small amps to get overwhelmed by bass frequencies, but this Acoustasonic still put out some brilliant shimmer in the trebles, and it made a huge difference.

Having a 3 band EQ really helped out when switching between guitars. We tried the amp with a couple of models, including a Martin D-15M, which is a particularly dark, bass heavy model, and also with a Taylor GS Mini, which is an incredibly bright, peppy guitar. The downside here was that the EQ was only applied to the channel 2 guitar input, which meant we had no control over vocal EQ. This was only a minor complaint, however, as it should be understood that this isn’t a true PA system anyway.

For us, the biggest disappointment about the Acoustasonic 15 was the lack of an aux in input. Being able to play along with a backing track is hugely important to a lot of singer songwriters, so this was really a glaring omission.

Our favorite feature of all was the XLR input. Having the ability to run a mic and a guitar simultaneously was exceptionally handy. Because it had individual volume controls for both the mic and guitar inputs, we were able to properly balance the volume of the vocals and the guitar, and considering it was all coming through the one speaker, it was amazingly clear.

Other Amps to Consider

The Fender Acoustasonic 15 is an extraordinary amp when you compare the performance you’re getting vs the price you pay – however, there are some other great options on the market. If you’re thinking you’d like to check out some alternatives before jumping into the Fender, these are the models we’d suggest you take a look at.

The Blackstar Acoustic:Core 30 is a little more expensive than the Fender, but in return it offers a huge array of features, including 2 channels for instrument and mic input, each with their own individual gain, EQ, and FX. Channel 1 has 2 band EQ, chorus, and reverb, while channel 2 (the mic input) features 3 band EQ and reverb. This amp accepts a footswitch, and also features aux in and headphone out, making it a superb choice for those who perform live.

The Peavey Vypyr X is a 20 watt modeler that delivers solid acoustic performance, while still being versatile enough to use with electric guitars and basses. It’s louder than both the Fender and the Blackstar, and is best suited to players who don’t need a mic line in, as there is only a single ¼” jack input. It offers a huge range of amp models and FX, which can be extremely useful for adding texture to your tone.

Final Thoughts on the Fender Acoustasonic 15

The Fender Acoustasonic 15 is a great little amp that performs well above its price point. It handles everything from full size dreadnoughts to compact concert guitars and delivers big, booming strummed rhythm parts and sweet fingerstyle passages with surprising ease.

If it had an aux in socket and even a basic tone control for the vocal channel, we think it would have been perfect. Having said that, even without these features, you’re getting great value for money – if you’re in need of an affordable acoustic amp, we’d highly recommend you check out this Fender.