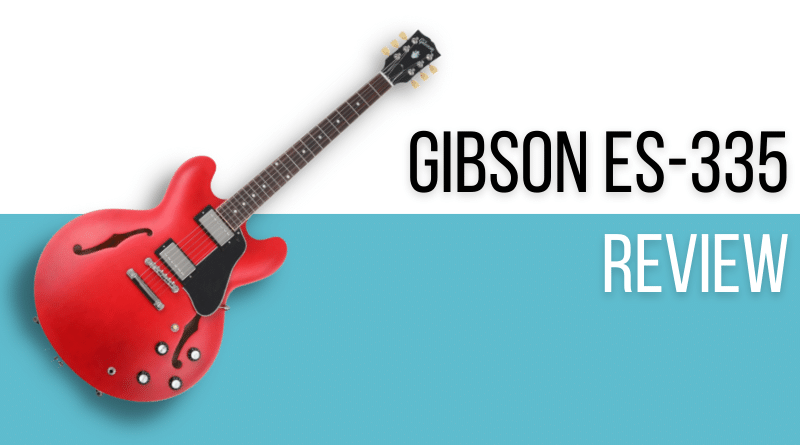 The Gibson ES-335 is the definitive semi hollow body guitar, in fact – ask 100 people to describe a semi hollow guitar, and we’d be willing to bet at least 99 of them describe a 335.

The reason for this model’s success is relatively simple – Gibson got it right on the first try. The ES-335 was actually the first commercially available, mass produced semi hollow electric guitar, and since its introduction, barring some special editions, the formula has remained unchanged.

In this KillerGuitarRigs Review, we got our hands on a Gibson ES-335, which we named as our Editor’s Choice in our roundup of the best Semi Hollow Guitars, to cover this amazing model in depth. Keep on reading to see how we got on!

The Gibson ES-335 is primarily targeted at intermediate to pro level players. Not only is the starting price is well over $3000, it’s physically a very large guitar, which can make it a more difficult model for newer players to handle. Not only is the body large, but the neck is on the beefier side, too, with a very 1950s rounded C profile.

For those used to larger bodied guitars, the ES-335 offers gig and studio quality tones out of the box, and the kind of high end reliability that touring artists demand from their guitars.

Beginners looking for a great ES-335 might find the Epiphone ES-335 to be a more suitable choice, though there are many great ES-335 alternatives.

The guitar we received for this test was a Satin Cherry finish model, which is arguably the most iconic look for this guitar. It was abundantly clear that incredible time and attention to detail had gone into the paintwork on this guitar. The workmanship was absolutely breathtaking, and despite the fact that this was a base level model, it really felt special.

Being a semi hollow model, it did feature a center block, which was of course made with solid maple. The construction of the wings was also maple, although it was 3 ply, and not solid. The layered maple isn’t a detrimental feature, it’s simply how Gibson has built these models since the beginning.

It had a hand rolled rosewood fretboard, installed on a set mahogany neck with a rounded C profile. This gave it a vintage feel, and will definitely appeal to those who like the baseball bat feel on their guitars. The neck was bound, with nibbed frets, which ensured a fantastic feel. In addition to the covered fret edges, the frets themselves were PLEK’d, resulting in perfect leveling, and a high end polish, just as you’d expect from a guitar at this price point.

The hardware was top quality across the board, too. The Tune-O-Matic Bridge was perfectly set up, and it was fitted with high end Grover Rotomatic Tuners. As for the nut, it came from the factory with a GraphTech NuBone example, which was beautifully cut, and most likely the only nut the guitar will ever need.

For the electronics, it came with a pair of calibrated T Type humbuckers, which happen to be some of the most dynamic that Gibson has to offer. They do everything from Vintage PAF to heavier and more modern styles, and are generally extremely well suited to semi hollow guitars like this.

Given that this is a vintage style guitar, the choice of pickups made complete sense. It was fitted with a pair of ’57 Classic humbucking pickups. For those familiar with the famous PAF, or Patent Applied For humbuckers fitted to vintage Gibsons, these pups are a recreation of those legendary units.

The ES-335 is something of a middleweight guitar. At just under 9lb, it still felt hefty, but it wasn’t a fatiguing experience to play from a standing position for any length of time. The large bass side wing of the guitar also provided a great resting spot for the strumming hand, too.

We found that the tuning stability and overall reliability were simply brilliant. We rarely needed to make any adjustments during the entire time we had the guitar. Additionally, thanks to the excellent factory set up, it was comfortable to play right out of the box, with a super low action that caused no buzz or choke outs.

It gave us an excellent array of tones, with extreme versatility from the T Type humbuckers. We were able to dial in some creamy blues tones with fantastic cleans, and when we wanted to get dirty, it was able to deliver big with searing metal tones and of course, classic rock and roll crunch.

Both pickup positions offered clarity across the board, and even in the middle position, which we rarely find ourselves using on HH guitars, we got some lovely warm rhythm sounds.

It served up some incredible sustain, and the acoustic resonance was brilliant. We could literally feel each note ringing through the guitar as we played. Sending this demo back after we were done was one of the hardest goodbyes we’ve had to make!

The Gibson ES-335 is genuinely one of the easiest guitars to love. Though it may have vintage styling, it holds its own with just about any genre you throw at it. While we think it’s about as perfect as a guitar can get, we understand that at this price point, you might want to consider some other options before purchasing. Below we’ve hand picked a couple of our favorite alternatives.

If you’re not sold on the size of the Gibson ES-335, and you think it might just be too big, you’ll almost certainly love the Gibson ES-339. It offers a lot of what the 335 does, but just in a smaller package. It does come with a more vintage tone thanks to its ‘57 PAF style pickups, but it’s honestly just as versatile, and maintains the same timeless aesthetic.

The Gretsch G6636-RF Richard Fortus Signature Falcon is a real competitor for the Gibson ES-335 in terms of both looks and performance. It is reminiscent of the Gibson with its mouse ear style cutaways and F hole cutouts, but it mixes things up with a chambered spruce center block for light weight performance, and of course, the legendary Gretsch FilterTron pickups for some awesome high gain tones.

Final Thoughts on the Gibson ES-335

The Gibson ES-335 has been in production in more or less the same configuration for quite some time, but it’s far from long in the tooth. It’s one of the few guitars that has remained popular throughout its entire lifespan, and the fact that it’s loved by players of practically every genre is testament to that.

If you’re thinking of truly investing in a guitar that will last a lifetime and then some, this Gibson is a great way to go.

​​Squier Affinity Telecaster Review [2022] Is This the Perfect Beginner’s Guitar?