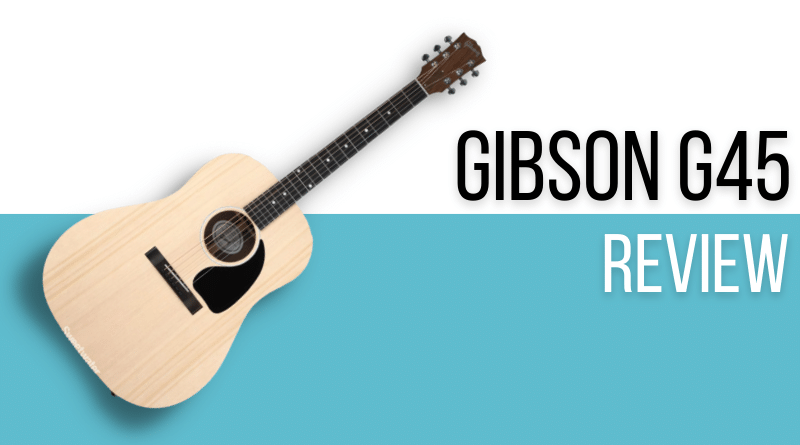 Owning an American made acoustic guitar is something that many players aspire to. Some of the world’s most iconic 6 strings have been manufactured in the USA, so it’s easy to see why they have such a strong reputation for quality. The issue with American made acoustics is that they can be extremely expensive, and that’s why models like the Gibson G45 are so appealing.

The Gibson G45 is the company’s entry level dreadnought acoustic, and it impressed us so much during our review of the 7 best acoustic guitars that we named it our Editor’s Choice. By popular demand, we’ve put together this more in depth KillerGuitarRigs Review to bring you a more detailed look at this wonderful acoustic.

If you’ve been thinking of investing in a quality US made acoustic like the G45, this is definitely a review you’ll want to keep on reading.

The Gibson G45 is a great all rounder that works well for players at all stages of their journeys. Yes, it’s an expensive prospect for a beginner, but if you’re a beginner who is serious about committing to playing guitar (and you have the cash) it offers easy playability, and tons of forgiveness.

More advanced players will also love the fantastic depth of tone provided by the premium materials and nitro finish, and overall reliability of the guitar, too.

The Gibson G45 is best described as classic. There’s no fancy sunburst finish, or any intricate inlay – just a simple natural top and a plain black pickguard. Despite not having any kind of elaborate design cues, it was still a fantastic guitar to look at.

It had a rounded shoulder dreadnought shape, which is a Gibson staple. It’s arguably their best known acoustic shape, and for good reason.

As for construction materials, the body was made with a solid Sitka spruce top, and solid walnut on the back and sides. This is always a great combination of woods, and again, it worked exceptionally well on the G45.

It had a utile neck, which was carved into GIbson’s excellent Advanced Response profile. It’s ever so slightly thicker than the SlimTaper necks found on Gibson electric guitars, but when playing, it feels very similar. We found it to be slick and comfortable, and thanks to the satin finish, it was fast, too. Beginners will find it to be extremely forgiving, and more advanced players will enjoy how easy it is to wring every last ounce of performance out of.

The tuners were Grover Mini Rotomatics, and as we suspected they would, they performed admirably. Fine tuning was easily accomplished, and they held firm across a range of conditions, delivering strong tuning stability. Both the nut and saddle were Tusq, which was another nice touch.

One of the most interesting features was the Player Port. This is a secondary sound hole on the upper bass side bout that is designed to let the player hear exactly what the audience does.

As an added bonus, it came with a really nice padded, backpack style gig bag. We probably wouldn’t put it in an airplane hold, but for getting around on public transport or storage in the house, it provides ample protection.

The G45 isn’t just well made, it’s a strong performer, too. We found it to be incredibly reliable, and found that it was able to adapt to practically every genre we threw its way.

Being a Gibson, it had a nice short to medium 24.75” scale. This kept the string tension relatively low, which added significantly to the overall comfort, and with a full size dreadnought, every last thing that improves comfort is always welcome.

Having walnut on the back and sides, we found that its voicing sat somewhere between mahogany and rosewood. It didn’t have the characteristic darkness of rosewood, but we still found it to be warmer than mahogany, with tons of mid range presence.

Those who play in bands or even just with another guitarist will love the dynamics of the G45. We found that it was able to both sit back and blend into a mix, and slice right through depending on the player’s touch. This is an extremely desirable trait in an acoustic, and considering this model sits at the entry level of the Gibson lineup, we were pleasantly surprised.

It performed well with flatpicking and fingerstyle, with plenty of note separation and great articulation. It was sweet and nuanced, and we really felt that we were playing a premium guitar.

When strumming, we still were able to make use of the powerful bottom end provided by the dreadnought shape. Even though there was a ton of bass and cannon-like projection, the Sitka spruce top added enough shimmer to balance out the tones to prevent muddiness and to stop it from getting washed out in a mix.

The Gibson G45 really does deliver a lot of guitar for the money, having said that, there are still some solid alternatives that you might want to take a look at before making a decision

The Martin D-10E is one of Martin’s upper tier Mexican made models. Like the Gibson, it’s a dreadnought style guitar, but it has square shoulders rather than sloped. It’s a little less expensive than the Gibson, but this is explained away by the fact that it’s a MIM model.

The Martin has a Sitka spruce top, too, but sapele on its back and sides. This results in a brighter tone than that of the Gibson – if you’re looking for something super snappy, this could be a great option for you. It’s also an acoustic-electric model, with Fishman MX-T electronics installed as standard.

The Taylor 214ce is a Grand Auditorium style acoustic with Sitka spruce on top, and rosewood on the back and sides. It’s noticeably darker sounding than the Gibson, but because of the smaller body style, it doesn’t have such a powerful bottom end, which keeps the tones very nicely balanced.

This is another acoustic electric model, with Taylor’s proprietary TS2 electronics pre installed. They do a great job of accurately reflecting the natural acoustic character of the guitar when amplified.

Final Thoughts on the Gibson G45

The Gibson G45 might be one of the more inexpensive models in the Gibson lineup, but you still get tons in return, making it a solid value proposition. It’s US made, and of course it says Gibson on the headstock – right or wrong, this does mean that it’ll hold value better than foreign made counterparts.

Tonally speaking it was extremely versatile, and well suited to a wide range of genres. This means that it should appeal to a pretty broad range of players, and eliminate the need for multiple guitars for different styles. Especially when spending over $1000 on a guitar, this is important for many.

Overall, we loved the experience of playing this guitar, and we’d gladly recommend it whether you’re looking for an heirloom quality instrument for playing at home, or whether you’re a gigging musician looking for your next workhorse guitar.