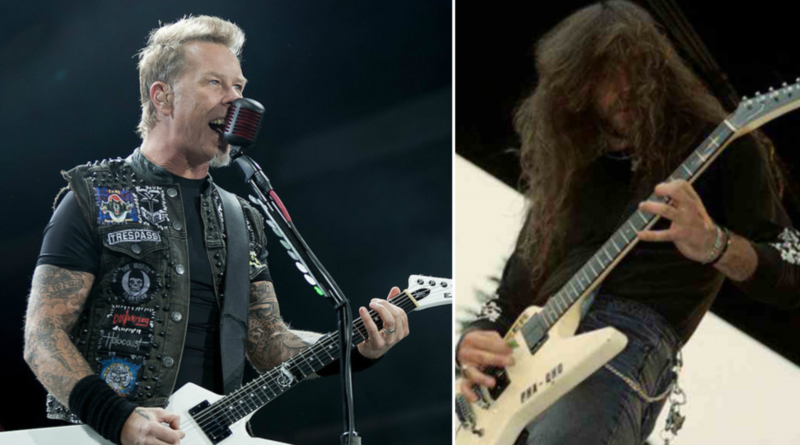 Guitarist Bobby Gustafson, best known for his work with Overkill, recently appeared on The Meista – Brews & Tunes podcast to discuss his work and career. Among other things, Gustafson recalled auditioning for Metallica back in 1992 after James Hetfield’s infamous on-stage accident where he was left with serious burns and was left unable to play guitar for a while. Bobby didn’t get the gig and Metallica ended up hiring John Marshall of Metal Church who also worked as the band’s tech. Recalling the audition and the whole thing, Gustafson said (transcript via Ultimate Guitar):

“I was doing [the short-lived Bay Area thrash metal project featuring Exodus drummer Tom Hunting] I4NI in New York after the Cycle Sluts [From Hell]. I had put an original band together, when we were playing out and we had a show the next night at L’Amours in Brooklyn and I got a call at about 11:30 at night from Tony Smith and they said that, ‘You know James got hurt, he burned, and they said that you were the first one they thought of to call’.

“So he gave me the entire set list which was like eighteen songs. So I had, like, a day and a half to learn the songs, plus I didn’t cancel my show [with I4NI] that night so I played that show with the songs on cassette trying to learn them backstage. I was supposed to fly to Denver, they went to Denver, and they set up in the arena like in a back room and they were doing the auditions there. And I was leaving the airport in New Jersey and it rained for ten minutes, just a downpour, 10 minutes. It screwed my flight up for four hours.

“So James was in pain, but he was waiting there because he wanted to sing while I went out and played and I assumed he would be there and I kind of tried to work off the vocals because I really never learned their songs, I guess maybe they thought I did but I was trying to cram all that in and then they just auditioned me on like five songs and I’m like, ‘Shit, why didn’t you just tell me the five? It would’ve been a lot easier to learn.'”

“So I really didn’t have everything down and as I was playing I kind of knew…I did ‘Creeping Death’ and I nailed it and they were like, ‘Holy shit, your right hand’s really good’, and I said ‘Yeah thank you’, and the rest just didn’t go, like ‘Nothing Else Matters’, I didn’t learn that yet. I was doing my own stuff…but yeah, that could have been pretty cool too. It would have been fun.”

Elsewhere during the interview, Gustafson also remembered almost joining Megadeth back in the 1980s. This was after Chris Poland and Gar Samuelson left the band and Dave Mustaine asked Bobby to join. Asked if these stories were true, Gustafson said:

“Yeah, it was right after Rat [Skates, then-Overkill drummer] had quit, we were on tour with Megadeth. We did two months in Europe, we had a couple days home and then we had another six weeks with Megadeth and by the end of that tour Rat had quit. We were in San Jose and he quit, and Dave wanted me to stay out there. Halfway through the tour, he had asked me…he was like fed up with his band and he wanted me to play guitar.”

However, Megadeth wasn’t at their best at the time due to their excessive substance abuse. Gustafson continued:

“They were just kind of a little too messed up for me at that point, you know on [the ‘Peace Sells’ tour], so we had just taken overcome out and I’m thinking ‘No, I think I’m gonna stick with my band.’ I probably would have done that one album, which is the third album [1988’s ‘So Far, So Good…So What!’]…yeah I don’t see it having gone past that, so I at least made the right choice with Overkill for another two albums I was able to do. But you know, it could have been cool. We knew each other before that and [Mustaine] just needed like a heavy rhythm guitar player.”