Skip to content
You are here: Killer Guitar Rigs > Feature > GWAR – “Al Jourgensen spelled out ‘Fugazi’ in lines of coke” 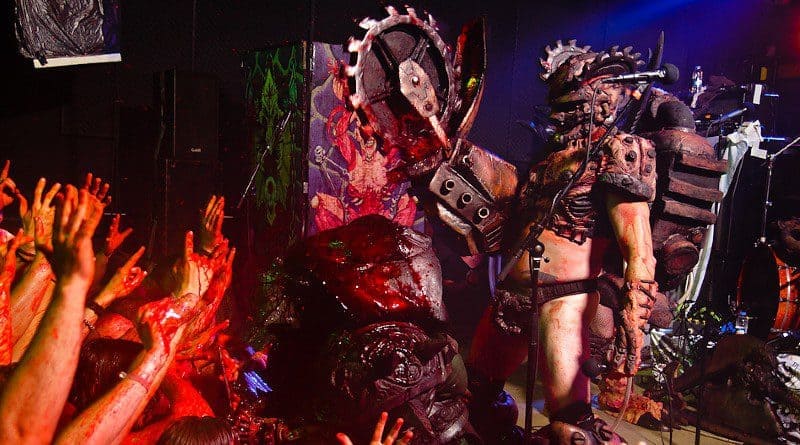 That said, while many come for the show, the band also has a lot of killer tunes, many of them coming from longest running constant member Balsac The Jaws Of Death, who’s human slave goes by the name of Mike Derks. Joining the band in 1988 immediately after debut album Hell-O, Derks has been a constant as scores of incredible guitarists have come and go, as the band’s popularity waned and then resurged around the millenium, and through the death of founding member and vocalist Oderus Urungus aka Dave Brockie of a heroin overdose in 2014.

The band are currently celebrating the 30th anniversary of their sophomore record Scumdogs Of The Universe. We caught up with Derks to talk about the record, his current guitar setup, and trying to keep his guitar dry in a stage covered in fake blood.

When you think back to the recording of Scumdogs, what’s the first memory that comes to mind?

This was my first time in a real recording studio so it was a tremendous leaning experience for me, but the thing that I always remember is something that our producer Ron Goudie(R.I.P.) taught us; When writing a song, play it through as a band at half speed and find the “bumps on the wheel”, the spots where all the parts don’t quite fit together. You’ll often find things that escape you at full speed.

How was it coming into GWAR as a non-metal guy writing metal songs (or at least the GWAR version of metal)?

None of us in the early days of GWAR were “Metal Guys”. I had really only started to be exposed to punk rock beyond the Sex Pistols and Ramones. I don’t think we were really writing metal songs on the first GWAR albums. In my opinion, the first metal album GWAR put out was 2001’s ‘Violence Has Arrived’. For Scumdogs, we saw the demonic imagery used by mainstream bands like KISS and Mötley Crüe, and wrote songs as if it were real.

Two of the songs were mixed by Al Jourgensen of Ministry, with you and Dave flying up to his studio in Chicago. Any interesting or wild stories from that experience that you can share?

It was actually Mike Bishop(then bassist, Beefcake, now singer, Blothar) and myself that went to Chicago to mix with Al and Paul Barker. The most memorable moment of an incredibly long night was when Al crushed up a bunch of quaaludes, mixed them with coke and spelled out “Fugazi” in lines on a mirror.

It was so much fun to play these first songs that Bishop, Brad and I wrote together, many of which we haven’t performed in decades. We are currently writing material for a new album and going back and remembering what our writing process was 30 years ago was refreshing. I think you might hear some Scumdogs influences when it comes out.

Having gone back and played the full record live, and with the benifit of 30 years of growing as a musician, songwriter, engineer etc, if the band were to rerecord the record (for whatever reason), are there any things you think you would change?

Last year, we had the luxury of being able to re-mix Scumdogs of the Universe with our old friend and incredibly talented producer Ronan Chris Murphy. Ronan’s history with GWAR goes all the way back to the formative years in the Richmond Dairy, so he was more qualified than anyone to take on this task. He truly succeeded in making a version of the album that captures who the band was then and the unique sound we were creating.

Guitar stuff – what guitar gear were you using back then? And what does your current live rig look like?

I had just purchased a rack-mounted Mesa Quad Preamp and Simul Class 295, but our producer, Ron Goudie made me play through a Marshall JCM 800. I am now using a Fractal Axe-fx III. It is freaking amazing! The near limitless creativity it affords me in creating tones and effect combinations far outweighs the barbs I might have to endure from snobbish gear purists. When combined with my custom Schecter signature guitar with built-in XY midi touch controller, it allows me to create sounds that have never before been possible.

When it comes to recording, do you use the same rig as you do live or do you approach records differently?

My live sound has been Mesa/Boogie amps ever since Scumdogs(I swapped my Quad for the Triaxis when it came out), so when I switched to Fractal, I was thrilled that when I dialed my settings into a “USA Pre Red” model, my tone was right there. In the studio, I always use a little less gain and it seems like more times than not, I end up back at the old JCM 800.

Again looking at your live rig, do you have to add any extra protection to your guitars to account for the possibility/inevitability of getting covered in liquid?

My guitar’s main protection is my knowledge of when and where the next head is going to get chopped off, but since it is always chaotic and never completely predictable on a GWAR stage, my best defense is a well timed turning of my back to the spew.

You’ve got to play with a lot of great guitarists in GWAR over the years. Was there any one person that you feel had a big effect on your own guitar playing or writing, or was it the case that they all added something?

Yeah, the list of guitarists that I’ve been privileged to create music with is pretty staggering.

So 2020 put a lot of bands on hiatus, but you guys have been very busy on Facebook and other places in terms of live streams, video sketches and other fun GWAR stuff. How has it been to do more of that stuff for a year and less live stuff?

We created a web-show called “Undead From Antarctica” in 2020. It is a comedy variety show with skits and interviews. It was great getting to play some other characters like we did back in the 90’s with our long form videos “Phallus in Wonderland” and “SkulHedFace”. We are going to bring it back this year with a slightly modified format, doing more of it live and less of the pre-produced skits. Unfortunately, we have yet to figure out how to make any money off those things. We are better artists than we are businessmen.

On the music side of things, you guys did the drive in show in 2020 – how was that? Was it weird playing to a field of cars instead of a front row of fans?

That was very weird! Spraying down cars in the parking lot of a baseball diamond is not exactly what I think of when I think of a GWAR show, but when the entire crowd started honking their horns to get us to do an encore, that was one of the coolest moments of 2020.

Finally you’ve been involved with raising awareness for people becoming bone marrow doners after your own battle with bone marrow cancer. What would you tell people about becoming a donor, and where can they find more information?

My transplant was a complete success and I am so grateful for all of the support that I got from our fans. I’ve been working with https://lovehopestrength.org/   When we were touring, they would send volunteers out to our show to enroll people in the donor program. It is so astronomically unlikely that any two people would be a match, so it is extremely important to get as many people as possible registered as donors. All it takes is a swab of your cheek that can be done through the mail, and if you are matched with someone in need, the process of harvesting the stem cells that will become bone marrow is not much more involved than donating blood.