Skip to content
You are here: Killer Guitar Rigs > Feature > Hellripper – All Hail The Goat! 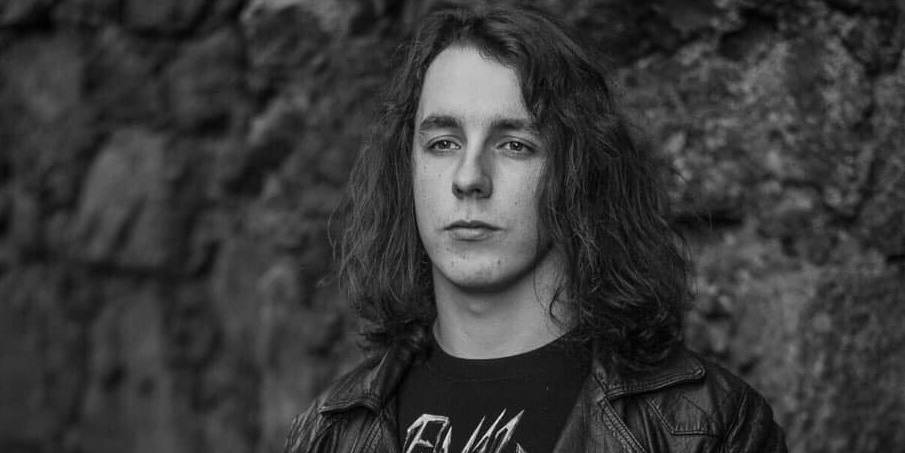 From the cold hills of Scotland comes Hellripper, James McBain’s studio project come to life. Freshly signed to Peaceville (alongside the likes of Darkthrone, Autopsy and Bloodbath), Hellripper is gearing up for the October 9th release his newest slice of blackened speed metal in the form of The Affair Of The Poisons. We caught up with James to talk about being a one man band, how to record an album alone, and why a Gibson Explorer is all you need.

First off, tell me about the new album, The Affair Of The Poisons. How would you compare it to Coagulating Darkness/Black Arts & Alchemy?

I think the new album takes the key elements of Hellripper’s sound (fast songs, cool riffs, catchy choruses and plenty of guitar solos) and adds a few new twists. I would say it is more diverse overall, but I think it also works as the most cohesive Hellripper release so far.

Was the release of the album delayed by Covid at all? I know you have a few gigs lined up for October, but was there a longer tour planned?

The release of the album was originally planned for May and I think everything was just about ready to go, but both Peaceville and I thought it would be for the best if we were to move the release date to October instead.

We were due to join Midnight and Red Death on a European tour in October/November but unfortunately that had to be cancelled. We had a couple of other shows lined up that were cancelled before they were announced as well. Hopefully we’ll be able to get out there again and play some shows sooner rather than later!

You played a number of gigs in 2019 and I believe early 2020, but the new record is still a one-man band affair (for the most part) – was there any temptation to get the live band to record the songs? Any particular reason you wanted to continue doing everything yourself?

Our last show was in December 2019, but we did have a few shows booked for the first half of 2020 that were cancelled or postponed. There was no temptation to get the live band involved although a couple of the guys contributed a couple of guitar solos and backing vocals which was cool! I can’t see Hellripper turning into a full band for studio recordings any time soon though. I prefer working alone as it’s easier for me and I just enjoy the whole process of writing and recording everything by myself at home without any deadlines etc.

At first, Hellripper became a solo project out of necessity as I couldn’t find other band members, but I’ve grown to love the whole process and I’ve learned a lot at the same time that I feel has improved my abilities as a songwriter and musician.

You’ve played with some other one-man project type bands, such as Midnight who you toured with in 2019, and Joel Grind of course mastered Black Arts – did you pick up any tips from them on how a one-man band should operate?

I don’t think I asked them to be honest. And I think even though we all operate as one-man bands, we all most likely have very different processes. I know Athenar for example does not really use social media and has other people operate the Midnight pages on his behalf, whereas I am very active on the Hellripper pages. That is the best part about being a one-man band anyway, you can do things however you want.

In a practical sense, how do you go about recording the records alone – do you make some scratch tracks to drum along to first, do you splice things up and move them around in Protools or similar if you want to add a verse or whatever… How does it work?

I write everything on TuxGuitar (a free alternative to GuitarPro), which is very helpful for getting ideas down, and very useful for structuring songs and trying out harmonies, different drum parts etc. So by the time I actually start recording, I have about 90% of the music fully written out and can listen to the songs as MIDI files. It saves me a lot of time and saves me the hassle of recording, editing and re-recording things over and over again. The MIDI files basically act as demos I guess.

After that, the drums are done first, followed by a scratch bass track (sometimes I keep the track if it’s good enough), rhythm guitars, final bass track if needed and finally vocals and lead guitars/overdubs/extras. I like to record a scratch bass track so that I can adjust my guitar tone while recording so that it works alongside the bass.

As far as the production on The Affair Of The Poisons, what are some albums that you had in mind as sonic inspiration for the sound of the record?

I tried to achieve a sound that sits right in between what would be considered “modern” and “old-school”. I think somewhere in between Darkthrone’s latest album (Old Star) and Toxic Holocaust’s ‘Chemistry of Consciousness’ would be what I was going for with ‘The Affair of the Poisons’.

The guitar I most associate you with is your Explorer, is that the main guitar on your releases? Do you use any others? What are you using as far as amps and pedals for the records? And then does your live rig change at all, or are you consistent between the two.

Yeah, the Gibson Explorer has been used on every Hellripper song I believe and is my favourite to play. I have a couple of other guitars that I have used a little on some Hellripper songs and in my other projects. I have an LTD V-500 that I think I recorded a solo or two with, and I have a Chapman ML-1 that I use as the main guitar in my band Lock Howl.

I have used a Marshall JCM900 50W combo amp for everything so far and I absolutely love the sound I get from it. I try not to use pedals if I can help it as I don’t like to complicate things. I managed to find a JCM900 head a while back for live shows so that I can get a somewhat consistent sound there. I picked up a Blackstar Series One head and cab at the end of 2019 also, but unfortunately I haven’t really been able to give them a proper go because of all the cancelled shows!

I’ve used a few different bass guitars over the years while recording. I never actually owned a bass until not long ago, so everything up until 2017 or 18 was recorded using instruments borrowed from friends. I can’t remember what they all were, but there was an Ibanez BTB at one point. For the ‘Black Arts & Alchemy’ EP and ‘The Affair of the Poisons’, I used an Epiphone Thunderbird and I DI’d the tracks. I use a couple of different amp sims for bass depending on what sounds best for the song.

On technique – your playing is blindingly fast – I’ve watched a few of the practice routines you streamed on Facebook and it blew my mind how fast yet clean your rhythm playing is. Was there any point in your progression where you learned something that caused a sudden dramatic improvement either in speed or general technique? I’m sure our KGR readers would love to hear some tips on becoming a speed demon.

Thank you very much, I appreciate the kind words! Ever since I started playing guitar, I’ve been a lot more interested in playing rhythm guitar than leads. Over the past few years I have got more into playing lead guitar, but I definitely think my strength is rhythm.

When I discovered thrash, I tried learning as many songs as I could and of course playing songs by Metallica, Slayer, Annihilator etc. constantly is bound to have an effect! My advice would be to practice things slow, and gradually build up speed. Not very original, but everyone says it for a reason! And it does take time, so patience is key!

I never practiced “exercises” or anything like that as that kind of stuff just doesn’t appeal to me and I get bored of that very quickly. I always just played along with songs that I liked. If you want to improve on your downpicking, then of course Metallica is where it’s at – try songs like “Creeping Death” or “Master of Puppets” and try the faster live versions if you’re feeling brave. If you want to practice your alternate picking, there’s no shortage of bands to listen to, but of course Slayer would be a good choice – try learning “Chemical Warfare” or “Angel of Death”.

Final question: If someone wanted to learn a Hellripper song or even just riff that’s fun to play, what’s the one you would suggest?

A fun Hellripper song that’s easy enough to play would be “Hell’s Rock ‘N’ Roll”. That one isn’t too complicated and is at a reasonable speed I would say!

A couple of my favourites to play are “Conduit Closing” (tab) and “Black Arts & Alchemy” (tab), although they are slightly more difficult! Quite a few tracks from the new album are very fun to play also – give the title track and “Savage Blasphemy” a go!

A few of my go to riffs when I pick up a guitar to warm-up are: “Khomaniac” by Artillery (tab), “Welcome Home” by King Diamond (tab), “Oh Well“, by Fleetwood Mac (tab), “The Last of the Independents” by Rory Gallagher (tab) and a whole lotta AC/DC.