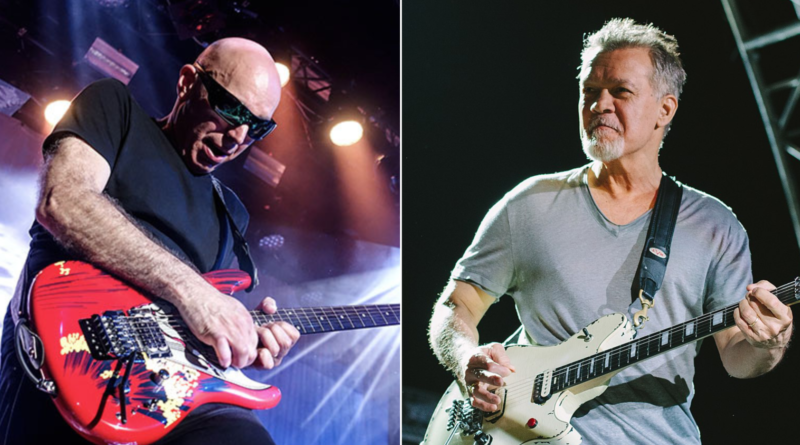 In a recent appearance on Out of the Box, guitar virtuoso legend Joe Satriani looked back on the whole Van Halen tribute thing that was discussed in the media. The story about the whole thing leaked when former Metallica bassist Jason Newsted revealed it in an interview earlier this year. Satriani confirmed it although the plans for the whole thing failed before anyone ever revealed it to the public. Discussing the matter, Joe explained (transcript via Blabbermouth):

“I get a call out of the blue from Alex Van Halen, who I’d never met until then, and he poses the unimaginable to me, which is to go out with a Van Halen tour, playing guitar. And as I’ve told other people, I heard my voice saying, ‘Yeah, I’ll do that,’ before my brain really thought, ‘Don’t say ‘yes.'”

“That’s an impossible thing to do; you can’t replace Eddie Van Halen. Nobody can.’ But I had such a good conversation with Alex, and just getting to know him on a few phone calls. And he brought Dave into the loop, who I’d met before but I can’t really say I know the man… And we came close to doing that sort of coming out show that New York City was holding last year.”

“And that would have been frightening, ’cause it was only three weeks away. And I was still listening to the Van Halen stuff, but still working on [my latest solo] album. So it wasn’t like we were prepared. There was no bass player.”

“They hadn’t really told me who was gonna play bass. And then there was the whole controversy about who should actually be in the band. And I was on the outside; I’m just some new guy. I was the one saying, ‘Who’s playing bass, by the way?’ And, ‘Is Sammy [Hagar] gonna come by?’ And, ‘Did you talk to Mike [Anthony, bassist]?'”

“So, conversations kept going on and on. I met with Alex at one point when I went down to L.A. But I think there’s some internal stuff that needs to get worked out with the family, and then the Van Halen band family, which is kind of big.”

“Again, I feel like I’m not close to the top of that queue. And many times I’ve told Alex, ‘Are you sure? Me?’ ‘Cause I don’t perform like Eddie. I’m just a superfan. And I can certainly play the stuff. But Eddie was such an original — just the way he ran around on stage and sang and played. It’s amazing.”

The New York City show that Joe is referring to is most likely the “We Love NYC: The Homecoming Concert” that was held in Central Park. It was held last year in August. The event lasted for a few days and its lineup included a variety of famous musicians and other celebrities, including Bruce Springsteen, Carlos Santana, Earth, Wind & Fire, and many others.