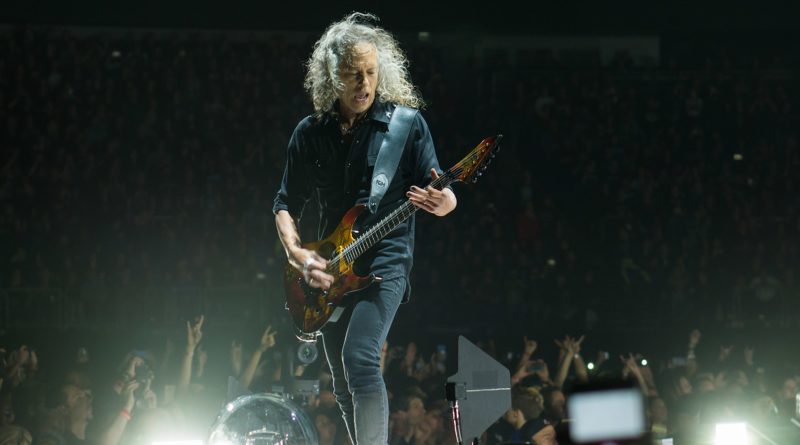 The news of Kirk Hammett releasing a solo EP came as a surprise to many. After all, Metallica always had pretty strict policies about work outside of the band. Nonetheless, Kirk got full support from his bandmates for the 4-track “Portal” which came out in April this year. You can check out “High Plains Drifter” in the embedded player below.

In a recent chat with Guitar World, Hammett discussed what it was like to finally be able to work as a solo artist as compared to being a band member, offering:

“It’s something that I’ve been living with for a long time. You know, I have this whole other side of my musical personality, but I’ve never had a real platform to express it. Now I do and I’m really happy about that.

“It’s pretty weird because usually, at this point with an album release, it’s not just me, it’s the four of us, and we have each other’s backs and we’re supporting each other.

“But this time, taking it all on by myself, I feel a little bit naked and a little bit insecure. When I’m feeling that way, that’s when I need to take a step back and say,’It’s okay to believe in the music,’ and that gets me through all those feelings of self-doubt.”

Discussing the gear used on the “Portals” EP, Kirk reflected on his “conservative” approach and a preference to not use that many pedals. He explained:

“I tend to be pretty conservative when it comes to effecting the sound, and it’s all because I just love the sound of a guitar through an amp. Sometimes, when I try to color it up with effects, I don’t like it.“

“I just love the purity of guitar. Don’t get me wrong, I love effects and I have a ton of pedals, but sometimes it’s hard for me to integrate successfully, or it’s hard for me to use them on a sensible level where it really augments the part. Just putting a pedal on there for novelty – I don’t believe in that.”

Of course, the question about Metallica’s potential new album cannot be avoided. Although Kirk probably isn’t allowed to talk much about it, he did hint that the record may come sooner than we might expect it. He said:

“Well, let’s just say that over the Covid years, we weren’t just sitting around on the couch texting each other, complaining about how we couldn’t work. That was the exact opposite of what happened! We’ve been working through the lost years – so you can draw your own conclusions from that!”

Corey Taylor Speaks Up on How He Dealt With Joey Jordison’s Passing, Names One ’Complicated’ Thing About Late Slipknot Drummer

Mike Mangini Reveals How Mike Portnoy Reacted to His Dream Theater Audition, Blasts ‘False’ Accusations on How He Joined