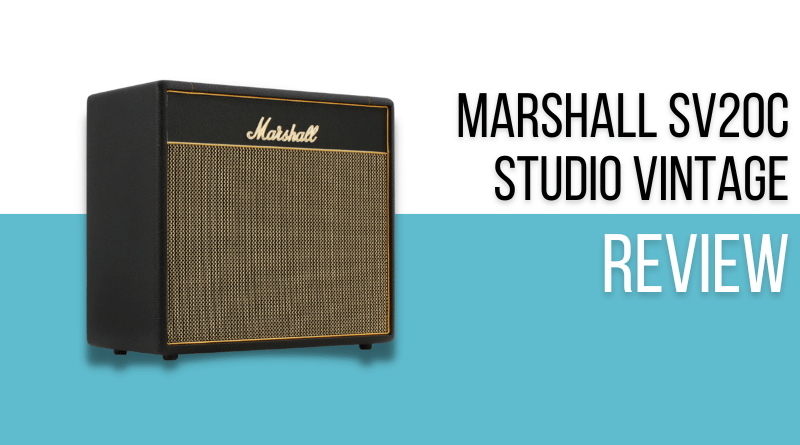 While the guitars of the ‘50s and ‘60s tend to get most of the credit for leading the charge in the early days of rock and roll, the amplifiers were the real unsung heroes. Models like the Marshall ‘59 Super Lead were instrumental in creating the sound of the era, and remain to this day as some of the most sought after amps in the world.

Many players want to recreate those tones, but either struggle to justify the cost of original vintage gear, or simply don’t have the space for a full Plexi stack – enter the Marshall SV20C Studio Vintage, a combo amp that squashes genuine Super Lead tone down into a compact 20 watt form factor.

In this KillerGuitarRigs Review, we’ll be taking an in depth look at the Marshall SV20C Studio Vintage to learn more about its features, performance, and most importantly, its tones.

This is the very same amp that we named as our Editor’s Choice in our roundup of the best small tube amps under 20 watts. If you’re in the market for a high end tube amp, and you’re looking for that classic British tone, you’re definitely going to want to keep on reading.

Marshall SV20C Studio Vintage: Who is This For?

It’s the closest you’ll get to genuine Plexi tones in an amp of this size, and it might just be the finest studio amp currently for sale today.

It’s an absolute weapon mic’d up on stage, too and thanks to its built in attenuator, it even allows for practice at reasonable volumes.

Being a premium amp, the Studio Vintage is actually a British made model, and is assembled in the same Bletchley factory that has produced their most iconic models since 1967.

It’s built with a rock solid plywood cabinet, and draped in vintage style vinyl. It looks absolutely epic, and the fit and finish is just as good. The cabinet has an open back design, and this really adds a lot to the

One example of the high end construction is the steel chassis that houses the electronics. It’s perfectly fitted, so there’s not even the slightest rattle when pushing this amp to the limit.

Driving this amp are 3 x 12AX7 preamp tubes and 2 x EL34 power tubes. This is a classic Marshall setup that results in easy breakup and a tight, compressed sound. It pushes air with a single 10” Celestion V type speaker, which we think is the perfect pairing for this amp.

The control panel is top mounted, and in a nod to the original Super Lead, has the famous Plexiglass finish. It features 2 channels – Normal, and High Treble, and like the ‘59 Super Lead, has 4 separate inputs (high and low for each channel). It does support jumping the inputs with patch cables, too, opening up a ton of tonal blending options.

For sound shaping, it features a 3 band EQ with separate volume controls for each channel, and also a presence knob. Next to the power switch, there’s also a “Low/High” switch that activates the attenuator, with the full 20 watts in the High setting, and a reduced 5 watts in the Low position.

As we suspected based on the model name, the SV20 really delivered on the vintage tone. Like the original Super Lead, it’s not a particularly high gain amp, but with the right settings (and especially when using a Les Paul) it gave us some outstanding overdrive and crunch.

It served up solid performance throughout the entire frequency range. It gave us sharp bass response, gorgeous shimmery treble, and a tight, focused mid range. It was articulate, and every single note could be heard, even when it was cranked.

In the normal channel, we found the tone to be extra thick, and extremely rich – worlds apart from the high treble channel which was extremely aggressive, and much sharper. We likened the two modes as switching between the neck and bridge pickup on a guitar.

While both channels definitely have their place individually, we thought that the amp really came alive when we linked the high and normal channels with a patch cable. Doing this effectively turns the channel volume controls into tone controls and opens up a ton of extra sounds.

Because it’s not a high gain kind of amp it had a lot of headroom (for a Marshall), which we found made it a great pedal platform. It took both delay and reverb effects well, remaining clear and articulate, and also performed well with both light overdrive and full blown distortion.

Other Amps to Consider

The Marshall SV20C is a genuinely amazing amp, and we think it works for a huge range of players, but if you’re not 100% sure it’s for you, we’d suggest you check out our favorite alternatives below.

If you’re a fan of the iconic Silver Jubilee amp series, you’ll love the Marshall 2525C Mini Silver Jubilee. It’s a reduced size version of the 100 watt behemoths that powered the hard rock scene of the ‘80s and ‘90s, making it (like the Studio Vintage) an extremely usable combo for both gigging and recording. It’s loaded with a 12” Celestion Greenback speaker for highly detailed performance, and features power attenuation for great tone at low volume.

There are few modern amps as iconic as the JCM800, and with the Marshall SC20C Studio Classic, you’re getting all that thundering high gain performance in a much more manageable 20/5 watt combo. It has solid clean performance, but really shines with high gain metal tones. It features DI out for easy FOH setup, and an FX loop for exceptional pedal performance.

As far as small tube amps of 20 watts or less go, they don’t get any better than the Marshall SV20C Studio Vintage. Marshall has crammed all that authentic Plexi goodness into a (relatively speaking) tiny package, and in doing so, created an amp that can deliver genuine vintage rock tones without the need for pedals or plugins.

Yes, it’s a premium amp, and with that status comes a higher price tag – but this amp still remains the cheapest way to get those authentic Super Lead tones without relying on modeling. It’s loud enough for gigging, and the power attenuation makes it suitable for practicing and even recording at home, too.