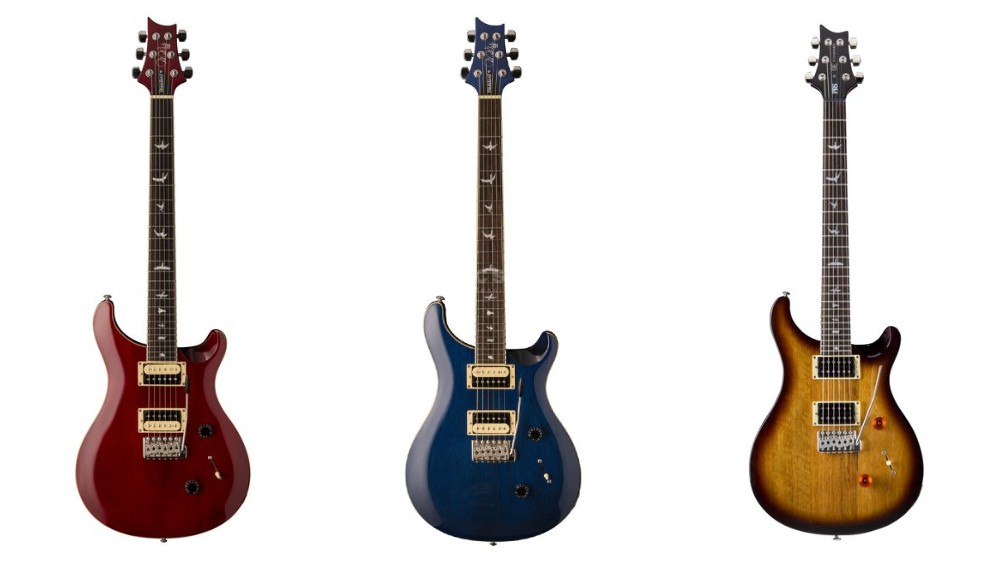 Ever found yourself looking for that “one” guitar that can do it all but is wallet-friendly? Or are you a seasoned player who is looking for a guitar that not only plays great but you’re comfortable taking out gigging?

The good news is that PRS offers an attractive stage and studio ready guitar that retails under $500. With a name like PRS, you can be sure that every dollar you spent on this instrument is worth it.

A modern classic of elegance, versatility, and ergonomics, this axe-of-all-trades may be all that you’ll ever need. With classy looks and a ton of tonal options, this “student edition” still carries the mojo the core Custom 24 is known for. The PRS SE Standard 24 puts the quality that Paul Reed Smith guitars are known for at a price that won’t break the bank.

An affordable and quality-made guitar made and designed by a brand who are known for making exceptional instruments, trying out this guitar is pretty much obligatory.

Who is the PRS SE Standard 24 for?

The SE Standard 24 is for guitar players who want top of the line specs at a wallet-friendly price.

Boasting classic PSR specs such as the 24-fret set-neck design, bird inlays, and a PRS-designed tremolo system, as well as the Paul Reed Smith signature on the headstock, this guitar has all the highlights of the core Custom 24.

With specs and performance similar to the PRS flagship model and an entry-level price range, the SE Standard 24 is perfect for beginners who want to upgrade to an all-around reliable workhorse.

All that being said, nothing’s stopping a collector from adding this piece to their arsenal.

Where does the PRS SE Standard 24 sit in the SE line of guitars?

Debuting in 2001, Paul Reed Smith’s SE or Student Edition Korean-made guitars are faithful recreations of their well-known and sought after USA or Core models.

Even at a much lower cost than their made-in-Maryland counterparts, the PRS SE line still retains all the necessary features that define PRS. Paul Reed Smith is so proud of how far the Student Edition guitars have reached that they now sport slightly carved tops and the same PRS signature that the USA models have.

The PRS SE Standard 24 is the most affordable out of all the models in the SE line. It is basically a stripped-down version of the SE Custom 24, which in turn is a direct and more affordable recreation of the USA-made core Custom 24s.

As of 2019, much of the manufacturing was moved to a PRS dedicated Cort facility in Indonesia.

The PRS SE Standard 24 actually hits top marks for all four of our review areas.

Let’s walk through them one by one.

Even without the fancy maple top, the PRS SE Standard 24 still gives off a high level of elegance and class with its bound mahogany body and various finish options. The SE Standard 24 comes in Tobacco Burst, Translucent Blue, or Vintage Cherry finishes. The finish has a translucent character that beautifully showcases the wood grain, emphasizing the guitar’s natural and organic tones.

Although the Standard 24 doesn’t have the arched top and recessed knobs that the core models have, they still retain the necessary features such as the flagship double-cutaway design, the lower horn scoop, and all the other ergonomic contours that Paul Reed Smith is known for.

Even at this entry-level price point, PRS doesn’t compromise, and offers tonewoods that can also be found in their Maryland-made core models.

High quality solid mahogany makes up the body of this guitar, and the “wide thin” set neck is made out of quality maple with a rosewood fretboard and Pearloid PRS signature bird inlays.

The body and fingerboard are bound with a cream binding giving it a vintage aesthetic reminiscent of a golden-age single-cuts.

The PRS SE Standard 24 however does not have a maple cap or even a maple veneer. It may not have the eye-catching fancy flamed tops like those found on Core models and the SE Custom 22 or SE Custom 24, but it does make the guitar much lighter.

This model has an average weight of around 7 lbs. Which makes it about 2 pounds lighter than the USA-made Custom 24s. The body and neck are covered in gloss poly finishes which makes it easy to maintain without compromising the vibrant tonal qualities of the wood.

Starting at the headstock, the PRS SE Standard 24 is equipped with PRS-designed standard chrome tuners that surprisingly work well considering the price. Further down, it is equipped with a 1.69” synthetic bone nut which provides superior tuning stability, 24 medium nickel frets, and a chrome PRS-designed tremolo system that is smooth and easy to work with.

The guitar has an arsenal of PRS’s own 85/15 “S” humbucking pickups modeled after the 30th Anniversary 85/15 pickups that Paul Reed Smith Designed. The pickups are wired to a three-way pickup selector, one master volume, and push-pull tone knob to split the humbuckers.

The Standard 24 comes with standard-sized 500k potentiometers and a 0.022uf capacitor giving the humbuckers the sonic emphasis they need.

Acoustically, the guitar resonates a balanced tone because of the warm solid all-mahogany body, the bright and snappy maple neck, and the smooth, rich rosewood. Having a set-in construction rather than a bolt-on, this guitar is able to transfer vibrations well along its neck and body. Partnering that with a pair of 85/15 “S” humbuckers and a coil split function and this guitar delivers a wide range of sounds in the sonic spectrum.

Paul Reed Smith and his team is known for using humbuckers in most of their guitars, but the Paul Reed Smith humbuckers have a unique chimey character that makes single-coil users love them. From sparkly single-coils to fat and punchy humbuckers with lots of sustain, the 85/15 “S” pickups do not disappoint in delivering medium to high output, full sounding tones.

Pair this with a nice tube amp, this guitar can equally get you the golden age tones that Fenders and Gibsons are known for.

This guitar also has a feel that is somewhere between a Gibson and a Fender. With a scale length of 25”, a wide thin neck shape, and a 10” fingerboard radius, this guitar a sweet spot for every hand size. The guitar also has 24 well-rounded nickel frets which give access to two octaves, something Ibanez super strats are known for.

The gloss finish on the neck may be a turn off for some but after playing for an hour or two, the guitar will feel like an extension of your arm. The gloss finish also contributes to the durability of the guitar making it perfect for the road, or even regular local gigs.

The modern but classic custom body shape makes this guitar sit equally well on your lap as against your body when standing. With the lower horn scoop and the custom double-cutaway body shape, you’d find it effortless to play on the higher frets. Pair that with the ergonomic contours, this guitar will surely get you playing for extended hours.

All that said, PRS delivers top of the line sounds, playability, and versatility at a price that won’t break the bank.

Poly finishes are known to be sturdy and durable so you won’t worry getting dents and scratches on this guitar as it is built for a beating. Most polishes work for this guitar too, a thorough wipe on this guitar with a clean cloth will instantly restore it to its original luster.

Like ebony, pau ferro, and other unfinished fingerboards, rosewood requires conditioning from time to time. An application of lemon oil at least twice a year will keep the rosewood conditioned all throughout the instrument’s lifetime.

The PRS SE Standard 24 is fitted with a double-action truss rod and can be adjusted with a 7mm Hex Socket Wrench. Also, use a 1.5mm hex wrench to adjust the saddle heights and a Phillips head screwdriver to turn the intonation screws.

Over time, you’ll eventually want to upgrade the hardware. Luckily, PRS makes it easy as they offer a variety of options that would fit perfectly on the guitar. Graphtech, Hipshot, Wudtone, and other brands also offer nuts, saddles, and bridges that fit well with PRS guitars.

If you feel the need to upgrade on pickups, there are countless brands to choose from. PRS core pickups would be the ideal upgrades to these guitars but Seymour Duncan, Dimarzio, Tonerider, Bare Knuckle Pickups, as well as boutique pickup makers offer humbuckers or humbucker-sized P90s that suit any taste.

What strings does the PRS SE Standard 24 ship with?

These models are shipped with DAddario nickel-wound 10-46 strings but they work really well with other string brands and gauges too. If you prefer a softer and smoother feel, go for 9s or even 8s. If you tend to tune your guitars low then this guitar can definitely take 12s well.

Does it come with a hard case?

The PRS SE Standard 24 comes with its own PRS SE gig bag as an optional add-on. Gator and Mono also have guitar cases that work for the SE range.

The SE Standard 24 uses ceramic magnets. Mahogany is known to have a warm and dark sounding quality so the bright top-end ceramic magnets are the ideal choice. This combination contributes greatly to the versatility and tonal balance of the guitar.

Other Guitars To Consider

Versatilty, playability, subtle but class aesthetics are the key features on these guitars. Cort and LTD also offers unique options if you want something that is different but is not far-off from the PRS SE Standard 24.

If want a more traditional, vintage-inspired look rather than the modern classic design that the PRS SE Standard 24 offers, then the LTD EC-256 is a good place to start with.

If you want the classic single-cut design, dual humbuckers but with modern playability and a versatile tonal palette, then this axe is your best bet.

If versatility and playability got you into the PRS SE Standard 24, then the Cort G Series G290 FAT is a guitar we highly recommend.

Costing a few hundred dollars more, and with a similar layout to the PRS SE Standard 24, the Cort G Series G290 FAT is for players who opt to go for a more super-strat inspired guitar. This model also comes with a flame maple top, an ash body, and a birdseye maple neck. Definitely a stunning wood combination at this price point.

On looks alone, this guitar stands out more than the SE Standard 24. This guitar caters more towards the modern appointments rather than vintage specs.

This guitar is for players who wants something simple yet elegant looking that provide the best of both the Fender Stratocaster and the Gibson Les Paul sounds and playability.