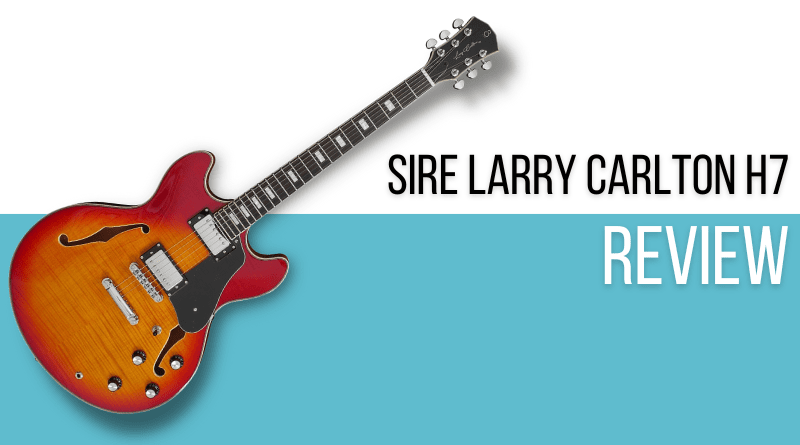 It would seem that there’s no shortage of ES-335 clones and copies on the market right now, meaning that the Sire Larry Carlton H7 is up against some serious competition. This body style is having a serious renaissance at the moment, and so, this guitar has come along at just the right time.

In this KillerGuitarRigs Review, we got our hands on the Sire Larry Carlton H7 Semi Hollow. It comes in at around the same price as the current range of Epiphone ES-335s, and it really has a lot to offer.

Keep on reading to find out more about how we got on with the H7, and whether it’s a better buy than the competition.

The Sire Larry Carlton H7 is a great choice for everyone from beginners to serious intermediate players and working musicians looking to keep their costs down. It looks fantastic, and it’s equipped like a much more expensive guitar, with great quality hardware, and premium materials.

Like the ES-335, the H7 is a big guitar, so while it’s well suited to beginners from a cost perspective, we should point out that adult beginners will find it more comfortable than kids will.

Our test guitar came to us in cherry sunburst, but it’s also available in black, white, see through red and vintage sunburst. All finishes except the black and white also come with a really nice flamed maple top, too.

The H7 has a maple top and sides, as well as a maple center block, and a mahogany neck. This is the same as you’d find on the Epiphone, and even the Gibson ES-335. We especially liked the fretboard, which was made from luxurious ebony, something you’d typically find on much more expensive models.

It had off white binding on both the top and the back of the body, the neck, and surprisingly, even the F holes were bound, which was a great touch, as this is a complaint we’ve had about the Epiphone.

There were Grover style tuners, which always look great on ES style guitars, and it even came with a genuine bone nut – something not often found in this price range. As for the rest of the hardware, it had a tune-o-matic bridge and a stop bar tail piece.

It had a pair of vintage style Alnico II humbuckers which are voiced to Larry Carlton’s specs, and there was a 3 way switch for selecting between the neck, middle, and bridge positions.

We found that the H7 had a nice medium weight. It was a little lighter than other ES style guitars we’ve recently tested, coming in at 8.2lb, which ensured great resonance and sustain, without ever feeling uncomfortable.

Playability was one of the strongest points on the H7. It had a very nice C profile neck, which was nice and slim at the nut, making it quick playing, and comfortable to hold for extended periods. The ebony fretboard felt amazing, too. It was smooth under the fingers, and clearly cut from an exceptional piece of wood.

There were 22 frets, which had a great feel to them; the edges were beautifully finished, and the crowns were well leveled and properly polished. The fretboard itself had rolled edges, too, which dramatically increased comfort and feel.

When being played acoustically, we were able to get a great sense of the resonance of this guitar. The maple center block really carries the vibration well, and it just sang through the hollow wings.

Sadly, we found the pickups to be the weakest point of this Sire guitar. They weren’t as versatile as the ProBuckers on the Epiphone, and they had quite a low output by comparison. They were great for jazz, and some early style rock and roll, but we found they got muddy very quickly when they were played with anything more than moderate levels of overdrive.

The neck was the better of the two pickups. It was thick and incredibly rich sounding when paired with the clean amp setting on our Katana Head. It was perfect for moody jazz progressions, and it was especially useful for rhythm work.

We did like the bridge pickup for blues soloing. It was quite biting, but as mentioned, it was really easily muddied with overdrive, so it’s really important to stick to either low to mid gain, or vintage overdrive style pedals if you’re planning to go the pedal route.

The Sire Larry Carlton H7 is a great guitar for jazz and blues, but if you’re looking for something that offers better all round performance, there are some fantastic alternatives to choose from. Take a look at the below for some ideas.

The Epiphone ES-335 is really the obvious choice. It’s similarly priced, and of course looks borderline identical. It delivers huge tone that can be pushed hard while still remaining clear. The build quality is as good as it is on the Sire, and of course it’s an officially licensed copy of the ES-335, rather than a clone, making it about as close to a Gibson as you’ll get in this price range.

The Gretsch G5622 Electromatic Center Block is another semi hollow model that offers more versatility than the Larry Carlton H7. Its Black Top BroadTron pickups handle everything from pop to metal, and the weight relieved center block keeps it even more comfortable without any loss of tone. On top of the awesome performance, it also happens to be one of the best looking semi hollow guitars on the market!

The Sire Larry Carlton H7 is a bit of an outlier when it comes to semi hollow guitars. It’s beautifully made, and offers great tones when it comes to mellower styles, but we found it to be a little soft for heavier overdriven styles of music, and this could be a dealbreaker for those who are looking for a one guitar does it all kind of instrument.

Ultimately, we don’t really think that this is a real competitor for the Epiphone ES-335. It’s so similarly priced that we’d really recommend going with the Epi given the chance as you’ll get a more dynamic guitar that can handle a far broader range of music.

Simon Morgan has 197 posts and counting. See all posts by Simon Morgan

From June to now, Megadeth has already released three singles from their upcoming new album “The Sick, the Dying… and

Gene Simmons Claims Kiss Will Continue Even After Farewell Tour, Explains How

Behringer SF300 Super Fuzz Review 2022 – Is This The Pedal FZ-2 Fans Have Been Waiting For?