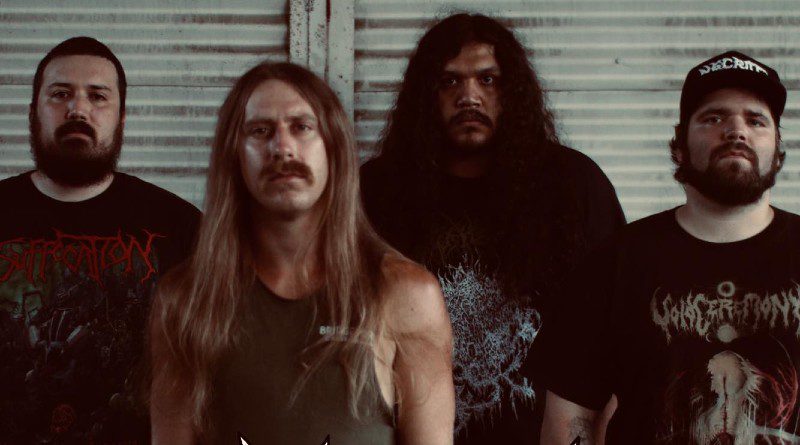 As old school death metal seems to be something of a resurgence, Skeletal Remains are quickly establishing themselves as a leading light. While the band have been around since 2011, releasing three records and touring with the likes of Obituary, Municipal Waste and Terrorizer, the anticipation for their recently released fourth album The Entombment Of Chaos has been both sizeable and deserved – the record has garnered glowing reviews from Banger, Louder Sound, Kerrang and more.

Personally, I’ve been playing the crap out of it since my pre-order arrived, and I’m excited to finally see them live when the world reopens.

Congratulations on the release of your new record, The Entombment Of Chaos. The reaction so far has been overwhelmingly positive – you guys must be pretty stoked? What are some of your favorite riffs on the record?

De La O – We’re all so extremely grateful for the positive feedback we’ve received! It’s definitely been pretty surreal. Damn all of ‘em really but Tombs of Chaos and Eternal Hatred stick out a bit more to me. We played a bit out of our element trying something new with these songs and we feel it really paid off in the end.

I personally discovered you guys through Devouring Mortality, and as an older dude I was blown away by how you managed to mix elements of Death, Obituary, and a number of other 90s Florida death metal influences and make them sound so fresh, original and organic. Entombment Of Chaos continues this vein, but feels to me like there’s more of a lean in the direction of Morbid Angel. What were your musical plans going into this record?

Monroy – We really didn’t have any sort of plan to do anything any different, it kind of just came out the way it did naturally, the only thing I guess you can say that we wanted a bit different was just to make the songs more brutal/aggressive especially when it comes to the drum department. We wrote most of the drums on my computer as we where writing the songs so that’s something we tried to make a bit more extreme.

You’ve had a lot of lineup changes the last few years, do you find that makes it easier to write each record with almost a different band each time? Does it make it difficult at all to maintain consistency?

Monroy – Not at all, I’d actually would prefer to keep the same line up if possible as long as everyone stays on the same page and Improves/grows together as band.

Unfortunately that and many more reasons is why we’ve had so many different line ups with each album – well It’s mostly been drummers that haven’t really stuck with us – but for the most part it’s always been the same three dudes on the first couple records up until the most recent line up change we had which pretty much was a whole new line up besides Mike coming back in who is a founding member.

What were some of the albums that you had in mind when you were thinking about the tone you wanted to achieve on this record?

De La O – Obviously a lot of the Morbid Angel records especially the later stuff with Steve Tucker. A lot of Hate Eternal was being spinned as well as Dead Congregation.

I see from the liner notes that the guitars and bass were recorded at SR Studio and reamped at Trench – would I be correct in assuming that’s Skeletal Remains Studio, aka you recording at home? If so, what were you using as far as interface and DAW? Any reason you wanted to do that rather than going into a studio?

Monroy – Yes, it’s my home/portable studio that we would move around from my house to our rehearsal lockout if we needed to work late.

I use Logic Pro X and a focusrite 2 channel scarlett, very simple set up but got the job done quite well for the DI stuff. Us doing it at home was actually never what we had planned, we actually already had studio time booked and ready to go but this whole pandemic/lock down thing happened literally the day before recording started and trench didn’t feel to comfortable with us coming to do the record until everything blew over etc.

Luckily they where at least cool with us doing the drums there since Charlie was already in town and ready to go when this whole lock down thing happened.

Tell me about some of the gear on the record – what guitars and pedals were used? The bass? And when the guitars were reamped, did you pick specific amps to use, or was it more that you were looking for a certain tone?

De La O – I use an ESP E-II Arrow for the 6 strings songs and an Ibanez Prestige RG2027XL for 7 string songs.

For pedals we both use the same set up with MXR Phase 90, MXR Flanger, Morley Bad Horsie II but for boost/delay I use the Dunable Eidolon and Chris uses the Tech 21 Boost D.L.A. V2.

For bass we used a Schecter but I’m not too sure of the model to be honest haha.

We used our usual set up of ENGL amps (Powerball 2 and Fireball 100) because in our opinion they are the best you can get haha.

Final question – if someone wanted to learn a Skeletal Remains song or even just a riff that’s fun to play, what’s the one you would suggest?

De La O – Any one of them haha. They’re all fun as shit to play! One of my personal favorites though is Euphoric Bloodfeast.  It has the perfect blend of technicality and groove in my opinion it’s just a fun song to play all around.