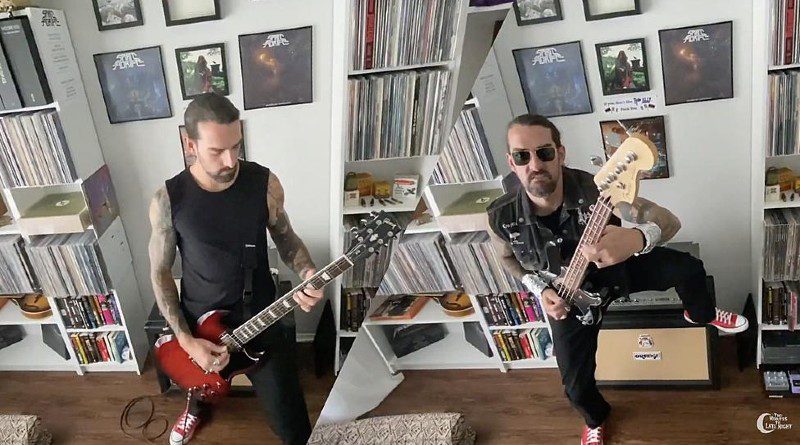 One of the many collaborations to come out of this year was a cover of Thin Lizzy’s “Emerald” by a cadre of musicians including members of High On Fire, Old Man Gloom and Pallbearer – and to literally nobody’s surprise, Nate Garrett of Spirit Adrift.

You see, anyone who’s paid even a moment’s attention to metal this year will have heard some of Spirit Adrift’s incredible new record Enlightened In Eternity, an album that invokes many of hard rock and metal’s high points from the last fifty years, and no influence is more obvious than the soaring guitar leads of Thin Lizzy.

Indeed, Nate is also often seen sporting Thin Lizzy shirts, and even repping Philo in interviews – which as an Irish guy (like, actually Irish), I appreciate massively. Since I moved to the US in 2014 it’s been a pleasant surprise to see how many people love the band that many of us back home assume never made a dent in the US.

So of couse, when I had the chance to catch up with Nate, there was only one possible topic of conversation – Lizzy.

What is it about Thin Lizzy that makes them stand out to you?

The short and obvious answer would be Phil Lynott. What an extraordinary person. His songwriting, sense of melody, ability to write such memorable hooks, and his pain is what made their music so special. Talk about a unique life experience, with intense traumas and struggles.

There’s a documentary about him on YouTube called The Outlaw, which is crucial viewing for anyone remotely interested in rock music or even artistic endeavors or the human struggle in general. The documentary features his mother pretty heavily, and she describes how difficult it was for Phil to grow up in Ireland in the 1950’s and 60’s as a person of mixed race.

The guy persevered against all odds, overcame hatred and prejudice, and conquered his dreams. All of that emotion and heavy life experience comes out in the music.

I think another unique aspect of Thin Lizzy, speaking just from a music theory standpoint, is how deeply the music is influenced by traditional Irish and Gaelic melodies. Those intervals, melody lines, and harmonies will send chills down your spine.

How do you feel Lizzy have influenced you as a songwriter and a guitarist?

Thin Lizzy has probably influenced me as much as any other single band or artist. Especially my approach to guitar harmonies.

Sometimes I hear bands (not so much in the old days, but today), and their guitar harmonies just sound wrong to me. Incorrect. To me, there’s only three ways to do guitar harmonies: Thin Lizzy, Morbid Angel, or Slayer. Any other band doing harmonies is probably using one of those types of guitar harmonies.

As far as songwriting goes, Thin Lizzy knew how to write songs, not just string parts together. A lot of bands will write a handful of good riffs and just string them together and call it a song. The true masters look at the song craft as being equally or even more important than the riff writing. Writing a cool riff is nowhere near as difficult as composing a song that ebbs and flows, smoothly transitions, entrances and enthralls the listener, and sticks in people’s brains forever. Thin Lizzy is a band to study if you want to learn how to do that.

Are there any particular songs or parts on the new record (or on the earlier records) that you feel have an overt Lizzy influence?

Cosmic Conquest, with that straightforward rock beat, the idea of writing that type of straight-ahead dirty rock song was definitely inspired by Thin Lizzy.

It’s funny, people mention COC with that track, and I just don’t hear it. That one was inspired by Thin Lizzy, Trouble, Wino, Annihilation Time, and a little bit by the Hot Rod soundtrack if I’m being honest. The dual guitar break is inspired by those harmonized, ripping solos that Trouble used to do. But they got that from Thin Lizzy. Or maybe they got it from Maiden, who got it from Thin Lizzy. You see what I’m saying. People who try to play the “gotcha!” game don’t understand that every bit of music and every bit of art came from somewhere, and that’s half the fun. Tracing the lineage of inspiration.

But yeah, there’s Thin Lizzy influence on every album, and on most of our guitar solos. Like I said, if the guitar harmony has the vibe of Priest, Maiden, Scorpions… at the end of the day that came from Thin Lizzy, or maybe Wishbone Ash.

What are your three favorite Lizzy riffs/licks?

There’s way, way too many to narrow down to three. But I’ll arbitrarily list the first that come to mind:

All the lead guitar and harmonies in Soldier Of Fortune. If you want to learn how to write bad ass, epic, catchy guitar harmonies, this is the only song you ever need to hear. It’s that good.

The chorus of King’s Vengeance. This is an overlooked track. I love how the lone guitar leads into the chorus, then the bass drives the whole part. It’s just a classic, big, wide-open chorus with an intense, beautiful vocal line.

The guitar harmony “hook” in Southbound. It’s the first thing you hear. This is one of those that gets stuck in your head permanently.

Could you name three Lizzy songs you think every guitarist should learn (easy/intermediate/hot fire)?

Again, way too many to pin down to three. Picking thirty might be slightly more realistic, haha. But here goes:

Waiting For An Alibi. Nothing too technically difficult here. But that songwriting skill I mentioned earlier, this is a great example. What a fucking song. Any musician should study both guitars, bass, drums, lead and harmony vocals. Every single aspect of the song is masterful.

Cowboy Song. This one is obvious, for all the same reasons I just mentioned. Plus this is almost like their version of a country song, which is bad ass.

Massacre. This song really showcases how influential Thin Lizzy was on heavy metal, specifically a band like Iron Maiden. HOOKS. This song is proof you can come up with two or three hooks, and ride them to death all the way through the song. They find different ways to reincorporate and slightly mutate the hooks throughout the song. This ensures that the hooks get stuck in your head, but don’t get boring. That’s a fine line to straddle. Genius stuff.