Skip to content
You are here: Killer Guitar Rigs > Articles > What is the Woman Tone? How to recreate it on the guitar? 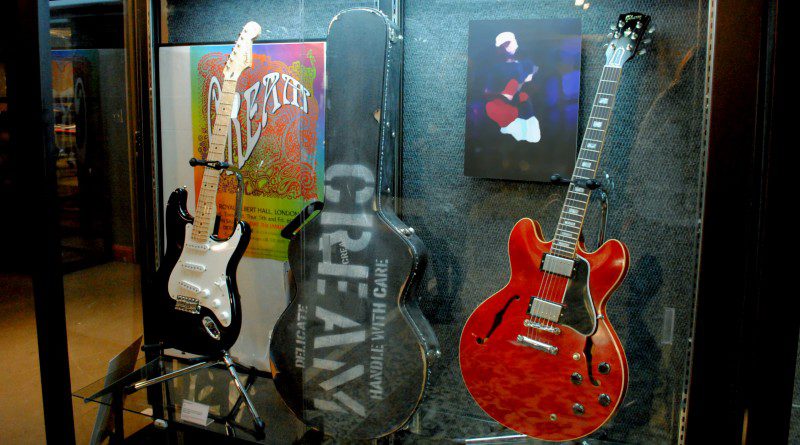 Woman tone is the guitar tone attributed to Eric Clapton’s solos using his 1964 Gibson SG during the late 1960s, predominantly heard on Disraeli Gears and songs like ‘Sunshine of Your Love’, ‘I Feel Free’, and ‘Swlabr’. In BBC’s Farewell Cream DVD, Clapton defines it as explains it as a tone with the lead pickup all the way up, bass turned all the way down on the tone control, and volume cranked to full.

Clapton’s quest for ‘his sound’ started right as he hit the scene as a young prodigious blues guitarist. It was the pre-Cream era when Eric was wailing at the behest of John Mayall and the Bluesbreakers with his ’59 Les Paul. After his trusty guitar was stolen, Clapton was gifted a 1965 Gibson SG by none other than George Harrison from the Beatles.

What is the Woman tone?

In the late 60s, guitarists had sworn allegiance to the bright, clean tones and twangy distortion – the sonic zeitgeist of the era. Not Eric Clapton. The world took note of Clapton’s uncanny and high-voiced guitar tone first heard on the opening riff of the track “Sunshine of Your Love”.

In an interview with Beat Instrumental in August ’67, Clapton called it the Woman Tone. Some felt that was a gimmicky name for a tone that is honky, tough, and snarling. Others argued that it was harmonically rich, buttery-smooth, and had the lingering, spectral sustain one would imagine in a Siren’s voice.

To Eric, it was a vox humana, akin to a sultry feminine ooooh with a generous dose of vibrato. Either way, it’s a radically different tone from anything the world was used to at that point. It remains, even to this day, one of the most sought after tones that guitarists try to recreate.

This was the time when ‘Clapton is God’ graffiti was everywhere to be seen in the streets of London. The guitar and the tone were all set to make history. In a 1968 interview, Clapton demonstrated the tone using The Fool. This video is the best source on the subject. At 2:05, Eric Clapton talks about how he achieves the woman tone and plays a few tasty licks to boot.

How to Create the Woman tone on a Gibson or Epiphone Guitar:

There is more than one way to skin a cat. So, I’ll give you a basic guideline to get you started. Crack up your amp to full. Select both pickups or just the neck pickup. Turn your volume to full and roll off the bass to zero or one on your guitar control panel (knobs). Inject some overdrive, preferable via a tube amp. You can also use a dirt pedal as long as it has a spot in the midrange.

How to Create the Woman tone on a Fender Strat:

You can approximate the Woman Tone on a Fender Stratocaster or any other single-coil equipped ax. Select the bridge + neck setting using your pickup selector and roll-off the tone. You may need an EQ pedal to adjust further. The Les Paul is darker sounding compared to the bright natural sounds of the Fender Strats. Try rolling back the mids and treble on your amp to compensate for this. Start with the knob at 5 for each and crack up the bass all the way. Tweak the knobs and listen carefully until you find the sweet spot.

Clapton recorded Sunshine of Your Love with a Les Paul Black Beauty. He used a 1962 Marshall Bluesbreaker (tube) will all knobs set to 10 and through a 4x12 cabinet featuring 25-watt Celestion Greenbacks.

If you are gunning for an exact replica of Clapton’s Woman Tone, you need to use a tube amp just as he did. Solid-state amps will get you close, but they lack the gooey breakup, which is essential to recreate the creamy distortion you hear in the Cream recordings.

Using John R. Wiley’s ‘The Marshall Bluesbreaker: The Story of Marshall’s First Combo’, I gathered that the Marshall JTM45 Clapton was using would have KT66s instead of the usual EL 34s or EL 84s. Of course, they’ll cost you a small fortune in the used market for a minuscule difference in break up.

Some, not all, distortion pedal can get you close as well. How close you get will depend on the quality and tone color of your pedal. Some insider accounts state that Clapton used an always-on Dallas Rangemaster Treble Booster to increase the signal strength and high-end tone.

Eric Clapton: From the Woman Tone to Present

The Woman tone was recorded on Clapton’s ’64 Gibson SG that exemplifies the psychedelic craze of the 60s. It was hand-painted by a psychedelic band and design collective called ‘The Fool’ for Eric Clapton at the behest of Robert Stigwood, Cream’s manager.

Despite Clapton’s efforts to name it ‘Sunny’, it took its name from the collective and became one of the most iconic guitars in music history. Besides aesthetics, the guitar was also modified with the addition of new knobs and a stop-tail bridge that replaced the original.

40+ years later, the Eric Clapton we witnessed in Cream has evolved into another avatar altogether. For starters, he no longer plays Gibson guitars. Inspired by Jimi Hendrix and Steve Winwood, he switched to Fender Strats in the 70s and recorded two albums on his famous “Brownie” strat.

A few years later he shifted to Blackie – a strat assembled from three 1950s Fender Stratocasters by Nashville luthier Ted Newman Jones. The iconic guitar that was used to record hits like Wonderful Tonight, Cocaine, and Lay Down Sally was auctioned for nearly 1 million dollars in 2004. Believe it or not, Guitar Center was the bidder who got it.

The “woman tone” is undoubtedly the artifact of a stressed amp trying to reproduce loud treble coming from a dark guitar signal. Simply backing off the tone on the guitar just yields a dark and flat tone. The trick is to completely roll off the pickup’s tone and turn the tone control all the way up on your amp.