Skip to content
You are here: Killer Guitar Rigs > Articles > What wah pedal does Kirk Hammett use? 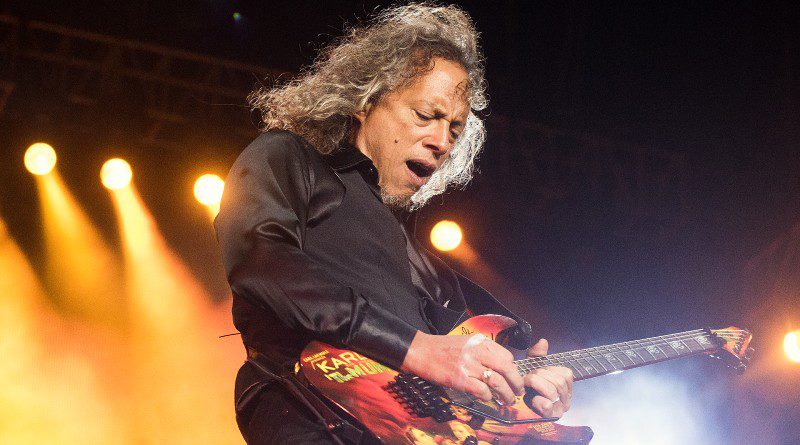 Love him or hate him, you have to admit Kirk Hammett is one the most influential guitarists of all time. Even though he’s been catching more flack as the years go on his sound is still one of the most unique sounds in all of guitar music.

And the most integral part of the signature Kirk Hammett sound is the use of his wah pedal. On the internet you’ll find thousands upon thousands of memes mocking Kirk’s use of the wah, but in reality this is what most people love and recognise his sound most by.

Kirk has been using Dunlop wahs for decades, and he even has his own signature Kirk Hammett Crybaby Wah. It’s actually one the most sold wahs on the market.

Kirk is known for being the lead guitarist of legendary band Metallica. He’s been in the band since 1983, and can be heard on every single Metallica album to date.

He’s one of the most popular guitarists in the world, and has inspired thousands (if not millions) of people to pick up the instrument.

Metallica is a household name, and every metalhead seems to love this band. It’s not without a reason that even people who don’t care about metal at all can sing along to Nothing Else Matters, and can rock out to Enter Sandman. Part of that enormous legacy is thanks to Kirk’s work on lead guitar.

From screaming solos to melodic and tasteful licks, he’s got it all. His popularity has been declining in recent years, most of this is thanks to his supposed decline in technical skill. It is true that his performance is not up to par with that from the old days, but you have to remember he’s in his fifties already, and has developed arthritis in his hands.

Even with all this, he’s still able to pull off some of the most difficult, beautiful, tear-jerking leads in the genre.

Kirk mainly uses a combination of ESP guitars and his signature Randall Amp in the studio. Live he uses an AxeFX and multiple guitars including ESP, Jackson, and Gibson.

Part of that is obviously his wah pedal. He always uses his signature wah, and usually has about five or more wah pedals scattered around the stage at a live show.

His tone is not all that different from James’ (rhythm guitarist of Metallica). They use very similar sounds live, so it’s often hard to discern which side is who. In the studio he’s only heard during solos. Other rhythm’s and leads are played by James. Fun fact, Metallica’s 8th album ‘St. Anger’ has no solos, but Kirk plays rhythm guitar on every song (probably for the fact that he wouldn’t have anything to do and he wouldn’t be on the album at all).

Kirk has been using Dunlop wah’s for his entire career. The wah sound is so associated with him that he eventually got his own signature wah pedal, the Dunlop KH95 Kirk Hammett Wah. It’s inspired by the classic Dunlop Cry Baby Wah, but has some cool graphics to make it unique. Most notably the slime green fade and boney footprint, representing Kirk’s love for classic horror movies.

Kirk has used the wah on a multitude of solos, including Enter Sandman, No Remorse, Master of Puppets and Memory Remains. He uses it on almost every solo, and this what led to the ‘Kirk Wahmmett’ trend.

This wah pedal is designed after the Crybaby. Spec and sound is no different from a regular Crybaby, but it has a different kind of charm. Diehard Kirk Hammett fans will undoubtedly have this on their board, and this pedal is a great choice for players who don’t like the look of a classic Crybaby, and want to spice it up a little.

Putting the salesman in me aside for a minute, this is a very famous pedal. It’s one of Dunlops most popular pedals, and one of the most popular wah’s in existence. The price is also not too high for most people. Some signature wahs (like the Dimebag wah) go for over $200, but the KH is priced at around an affordable $150. This makes it very popular with guitarists who love Metallica or Kirk in general.

Other than that there’s not much to say about this pedal, it’s basically any old Dunlop wah but with a cool graphic and different charm. This says nothing about how awesome it is, because let’s be honest, it’s just plain cool (maybe a little tacky, but that’s what gives it it’s charm).

Kirk doesn’t use a lot of effects pedals other than wah and overdrive. His primary overdrive during the early days of Metallica was the Boss Super Overdrive. He later switched to the Ibanez TS9.

This yellow box of overdrive fury is one the most famous overdrive pedals out there. It’s very popular as a boost, as it’s very clean at low gain, and gives a really focused and tight boost. It’s got a different character than a tubescreamer, and it’s just as good as any other overdrive.

The most popular Tube Screamer made by legendary guitar company Ibanez. The TS9 is without a doubt one of the most famous guitar pedals in history, and also one of the most copied pedals ever. No other Tube Screamer style pedal is as iconic as the TS9, and it’s been used by countless guitar legends including Stevie Ray Vaughn, Eric Clapton, and yes, Kirk Hammett.

Kirk Hammett actually has his own pedal company, KHDK Pedals. He makes many different kinds of pedals including distortions and overdrives.

As I stated before, Kirk Hammett is one of the most influential guitar players ever. Part of that is thanks to his wah. I’ll end this by saying: ‘WAHt a guitarist!’… I’ll see myself out.

Acoustic guitar strings are prone to making squeaking noises, but we have a handful of tips and tricks to keep them to a minimum.