Skip to content
You are here: Killer Guitar Rigs > Articles > What wah pedal does Tom Morello use? 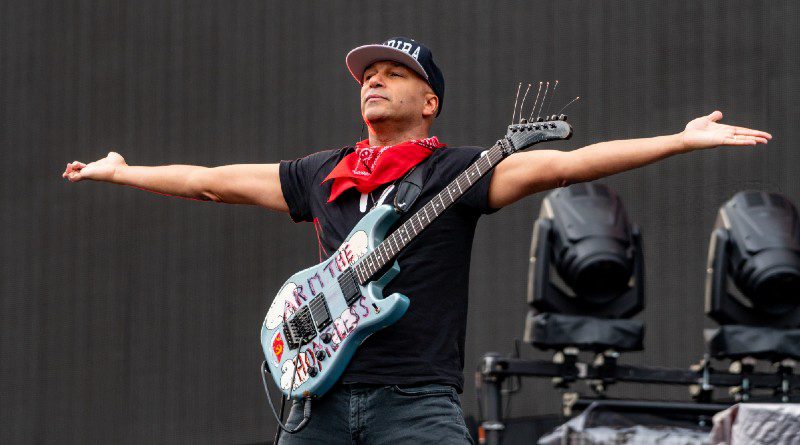 Tom Morello mainly uses the Dunlop CryBaby for most of his wah duties. In recent years he released a Signature CryBaby Wah with Dunlop, the TBM95, a bright red wah which features the slogan “Sometimes history needs a push” along the side in white lettering.

While Morello isn’t quite as associated with the wah pedal as say Kirk Hammett (who is rumored to walk around with a wah under each shoe), many of Rage Against The Machine’s most revered songs feature heavy wah, most notably Bulls On Parade.

Who is Tom Morello

While Morello is known as a rock guitarist, he grew up on a steady diet of rap and funk. When Rage Against The Machine first broke out into the music scene in late 1992, one of the things that made their blend of rap and rock notable was Morello’s guitar playing. While everyone else was focusing on chords and scales, Morello wanted to make his guitar sound like a turntable.

When I made the decision to stop searching for a sound that just didn’t exist in that guitar, and I just started creating, I learned to take the sounds the guitar had and found ways to make music that I liked with them.

Morello combined this approach to innovative and rythmic sounds on his guitar with rock riffs that had as much in common with Bootsy Collins as they did Black Sabbath – huge heavy riffs that were funky as all get out.

From RATM, Morello went on to see further success with Audioslave, featuring the late Chris Cornell of Soundgarden. While RATM have since reformed, he’s since kept busy with his own projects like the Nightwatchman, as well as Prophets Of Rage featuring members of Public Enemy and Cypress Hill.

Through all this, it’s Morello’s bouncy riffs that create the joining thread.

Tom Morello has used variations on the Dunlop CryBaby Wah for the majority of his career. It can still be found on his pedalboard today. His use of the wah can be heard in songs like Bulls on Parade (Rage Against the Machine) and a multitude of solos.

His signature wah is basically a standard Dunlop CryBaby Wah with a bright orange housing to really convey the energy and the passion he has with his music. The pedal features the slogans ‘sometimes history needs a push’ and ‘you don’t need a weapon when you are born one’ along the sides. It’s a pretty unique looking Signature CryBaby.

Tom Morello has a very unique sound. He used a knock-off Telecaster with single-coils for a lot of his music with Rage Against the Machine. He combined the sound of a single coil and high-gain distortion to create his iconic rhythm tone. An example of this can be heard in Rage Against the Machine’s most known song: Killing in the Name of. The sort of woolly, open sound of the single coil combined with massive amounts of gain resulted in a fairly chaotic sound that totally fits the vibe of the band.

He later used some other guitars like a strat knock-off, a Gibson Les Paul and a Gibson ES-335. His signature Fender is a somewhat dinky looking strat with Seymour Duncan pickups. It has the words ‘soul power’ written on top of it and a mirror pickguard, which all adds to the uniqueness.

But it doesn’t just end there. He is famous for his use of certain sound effects, which he all creates with his guitar. An example of that is his DJ-scratching ‘solos’. He mutes the strings at the neck and then swipes across the length of the strings with his other hand. To enhance the chaoticness he often uses effects like distortion, phaser, and yes, even wah.

He’s also not afraid to bust out the Digitech Whammy pedal. He chaotically shifts the notes from octave to octave to create a hyper-digital, somewhat futuristic sound. This can be heard in the guitar solo for Rage Against the Machine’s song ‘Killing in the Name of’.

He also tends to break out in loud noisy sections in the middle of a live-set. This is all part of what makes him a great guitar player. He certainly tests the boundaries of what you can do with a guitar and a handful of pedals. This is one of the reasons why so many players look up to him.

Other Effects he uses

Morello uses many different effects to create his unique sound. Here are a few of them.

Arguably the most famous phaser pedal in the world. This bright orange pedal with a single knob is on so many guitarists’ (legend or not) pedalboard. He uses this effect in many songs, and often combines them with other effects like wah, tremolo, and delay.

It’s easy to forget that Ibanez made more pedals than just the legendary Tube Screamers. They made a whole bunch of them, and even though they’re not as popular as sai, Boss or MXr pedals, some of them are very good. The AD is an analog delay that Tom used alongside others, including the Boss DD2.

Who doesn’t know Boss? Boss pedals are on almost every guitarists’ pedalboards, and not without reason. They sound great, are usually affordable, and are built like a tank. One of such pedals is the TR2 Tremolo Pedal. A very nice pedal that can go from mild vibrato to Tom Morello-style ‘insano’ mode.

Tom Morello is certainly a guitar wizard. From crazy effects to groovy riffs in strange contexts, he’s a very cool guitarist. He’s got a sound that is very unique and instantly recognisable. And although he hasn’t been in the mainstream that much, he’s still (maybe even for that exact reason) one of the greats.