Skip to content
You are here: Killer Guitar Rigs > Famous Guitars > What was the Stairway To Heaven guitar? 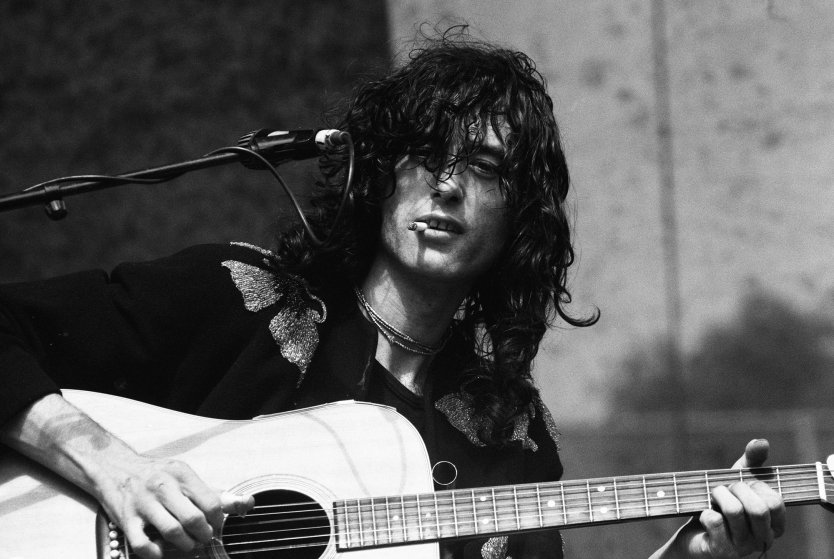 Led Zepplin’s Stairway To Heaven might be the most iconic guitar song of all time – but what guitars did Jimmy Page use?

The answer, unsurprisingly, is several.

But first, let’s discuss the elephant in the room…

Why Is Stairway To Heaven Banned in Guitar Stores

One of the best scenes in Wayne’s World was the “no stairway” bit, but is there an actual ban on playing Stairway in a guitar store?

No, but also yes.

Stairway To Heaven is the song that many MANY beginners start off with, so as a guitar store employee, you’re going to hear a million TERRIBLE renditions every day.

If you play it, is someone going to come up and tell you to stop? No, almost certainly not – but you will see the staff wince or give each other a sideways glance.

So should you play stairway in a guitar store? Do what you feel, but maybe, just maybe, considering jamming something different.

So what guitars were used on Stairway To Heaven?

The main parts of the song used two guitars, a Harmony Sovereign H1260 acoustic guitar and a Fender Electric XII 12 string played directly into the board.

The Harmony was Jimmy’s go-to guitar for writing and arranging during that period, he’s said to have written “Stairway To Heaven”, “Babe, I’m Gonna Leave You,” “Ramble On,” “Friends” and many others, and still has the guitar in his posession to this day – incredible for a guitar that you can still pick up for $700.

The Harmony guitar is quite special to me. It is what I used to write all the acoustic songs and many of the electric songs on the first three albums. I also used it to record all the acoustic tracks on the third album, and it’s the guitar I played on “Stairway to Heaven.”

For the solo, Page used a 1959 Fender Telecaster that Jeff Beck had gifted him after using it extensively in the Yardbirds – Jeff left the yardbirds with his favourite burst, and left Page the 1959, which he modified first by adding mirrors, and finally by stripping back to it’s original ash body and painting with a design that landed it the name “The Dragon”.

“I basically got my [Fender] Telecaster out to do that solo,” says Page. “It was the same Telecaster that I’d played on the first album, the one Jeff Beck had given me that I’d used in The Yardbirds, a bit of a magical guitar, really.”

The Day The Gibsons Took Over

Soon after recording Stairway, Page was gifted a Les Paul by Joe Walsh of the James Gang, and from there on the guitar would be synonymous with Led Zepplin.

The tele was likely played through a Supro, though Page later mused that it may have been a Marshall “but I can’t remember”.

When the band played the song live, Page would bust out his Heritage Cherry Gibson EDS-1275 which is a double neck guitar with 12 strings on the top neck and 6 on the bottom.

Page said of the song:

The idea of Stairway to Heaven was to have a piece of music which would just keep on unfolding into more layers and moods. […] The overlay of the composition would accelerate as it went through, on every level – every emotional level and every musical level. And so it just keeping opening up as it continues through its passage.

A spring clean for the May queen

The eight minute behemoth that is Stairway To Heaven originated from a 1970 writing trip to the Bron-Yr-Aur cottage in Wales that Page and Plant used to write many of the band’s classics.

Page has said he wrote the song “over a long period”, with parts of the song coming together from several originally unrelated pieces of music recorded on a casette recorded that Page carried around at the time.

The lyrics for the song come mainly from Plant improvising as Page strummed the chords by a log fire at Headley Grange, with “a huge percentage” making it to the final song.

The song was first played live in Belfast’s Ulster Hall on March 5th 1971, but the crowd was not impressed.

The band subsequently recorded a live version in the Paris Cinema theater in London in April of 1971, and it was this verision that was initially broadcast on the radio beginning three days later, becoming an instant hit.

Everything still turns to gold

The song was given a full studio recording and released on the album Led Zepplin IV in November of 1971, and the band’s record label imediately recognized it as a hit, imploring the band to release it as a single multiple times from 1971 through 1973.

The band however refused to do so, and as the song’s popularly grew, people bought the album as they would a single, ultimately leading to it’s massive success.

In the US, the song was released as a promotional seven inch in 1972, but it was never released to the public as such.

Stairway To Heaven was ultimately played at near every Led Zepplin show from April 1971 until the last show of their first run in 1980. The song would often stretch out to 15 minutes, with the solo alone lasting seven minutes.

Despite not picked up an instrument in person together for over a year, Of Mice And Men have written and recorded a killer new EP, Timeless, set for release Friday February 26th. We caught up with guitarist Phil Manansala to talk about the new EP, his twitch stream and his incredible guitar collection.

Articles Buyers Guides How To

9 Best Acoustic Cover Songs to Play in a Bar