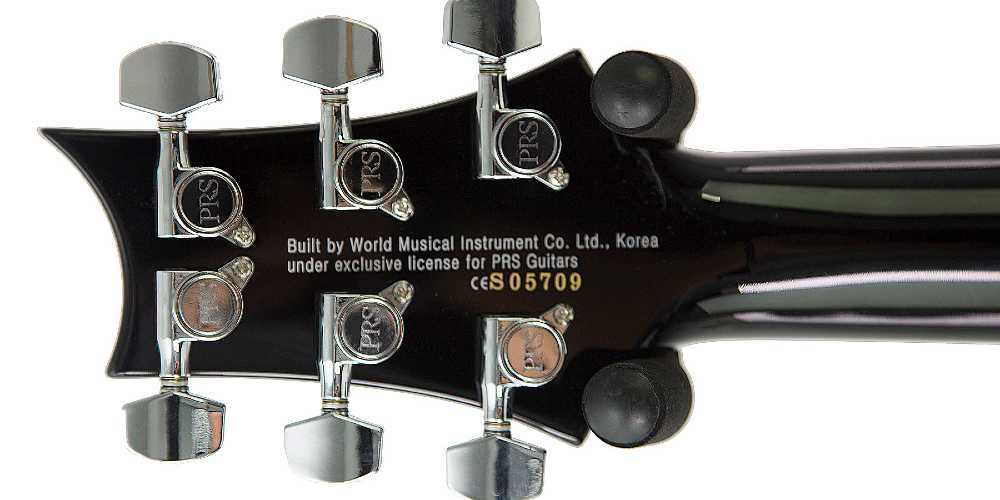 World Musical Instruments Korea are a large single facility manufacturer of a huge variety of guitar models for internationally known brands such as PRS, Chapman and LTD.

WMIC (as they are often styled) are based out of Incheon, South Korea and have a gigantic facility that is considered one of the “last standing” Korean guitar manufacturers.

But what brands are made there? Let’s take a look.

First off, it is quite difficult to pin down what brands are being manufactured by WMIC at any one time.

The list of brands under contract is not something that’s generally put out into the public domain, and at times even the manufacturer might not know if a brand has moved on to another facility for a given model or if they’re still just selling from a backlog of old stock.

It’s also the case that a brand may have certain models manufactured in multiple factories due to parts or wood availability etc.

As such, that means that a list like this is always a moving target – but here’s the best we can say at the time of writing!

While it is surprisingly hard to get actual company information or history for World Musical Instruments Korea, what we can say is they have been making guitars for decades, and as with most Korean manufacturers, they have a reputation for having above average quality.

In his 2016 “who makes who” video about guitar manufacturers, Phil McKnight described WMIC as “the biggie for quality”.

What’s nice about (WMIC) is they don’t make anything cheap. They don’t make any student-grade instruments. They make good stuff, and that’s how they keep that (quality going). That’s just how it goes.

So how does WMIC make so many guitars for different brands at different price points and not have them come out the same?

Typically when a company partners with a manufacturer to produce instruments for them, they not only provide the plans for the guitars themselves, they also agree to a large number of manufacturing standards.

For one example, companies will agree how often the CNC machine is reset – this would mean the reset button is pressed and the cutter moves back to coordinates 0, 0, 0 on the X, Y and Z axis. The reason you would want to do this is that no machine is infallible, and over time the machine can get slightly out of alignment, at which point it’s no longer cutting in the exact right sports.

Say company 1 wants the CNC reset once ever hour, while company 2 wants it reset once a day. Both of these have associated costs, both of these effect the total number of guitars can be output in the course of the day, both of these will have different effects on the maintanence schedule of the machine etc etc.

Therefore, you may find the cheaper brand, who reset the machine less often, have slightly worse quality than the company that have the machine reset regularly.

There are a host of these small agreements that will have an effect on both the price and quality of the output. Do they want the frets glued or just pressed? Do they want them dressed on site? Do they want cheap or expensive internal wiring?

All of these small manufacturing details agreed upon have a total effect on the final product.

Final QC in the US

Another huge difference is that many guitars go through a final QC process once they get to the US.

For example, PRS set up all of their SE line at their factory in the US before they go out to stores and ultimately customers. One step removed from that is Chapman who famously have their guitars QC’d by the stores that buy them to sell them to customers. Finally, you have a company like Rondo who ship their Agile guitars to customers without any QC – and this of course is reflected in the price.

In a July 2019 interview with Music Radar, PRS’s COO Jack Higginbotham revealed that they had moved most of their SE line from Korea to the Cor‐Tek (Cort) facilities in Indonesia.

The draw for PRS was that, instead of WMIC’s facility where many different guitars by many different brands are made under one roof, Cort had a facility that was 100% dedicated to only PRS SE guitars.

To have our own building where I know the guy who makes the necks or the bodies, I know the guy who sets the neck angles and glues them together and they’re going to do that every day – they’re not going to switch to making a Hagstrom the next day, or an ESP, or whatever. We now have a focus on our guitars that previously was never able to happen.

Ultimately, Higginbotham said that the mix of dedication to PRS’s guitars as well as the more favourable economics of moving from Korea to Indonesia meant WMIC’s time with PRS is likely coming to an end.

We still have some SE guitars made in Korea, but will it always be that way? Economics say probably not.

However, WMIC still have a wide range of brands that turn to them for their consistency and quality, as well as their willingness to create small batches of as little as 50 guitars – a huge coup for fledgling guitar brands.

Long may it continue.

Despite not picked up an instrument in person together for over a year, Of Mice And Men have written and recorded a killer new EP, Timeless, set for release Friday February 26th. We caught up with guitarist Phil Manansala to talk about the new EP, his twitch stream and his incredible guitar collection.

Articles Buyers Guides How To

9 Best Acoustic Cover Songs to Play in a Bar