Skip to content
You are here: Killer Guitar Rigs > Feature > BAEST – “Still Ripping As Hard As We Can!” 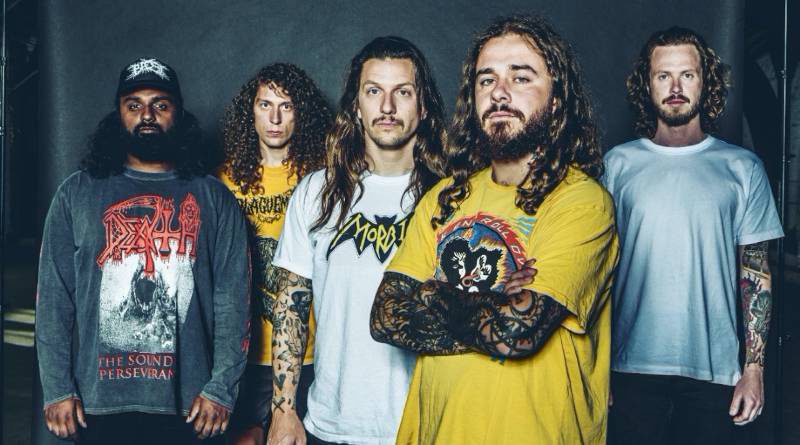 One of the unexpected consequences of 2020 was the huge number of albums that were released late in the year, held over with the hope that things would reopen and a normal album promotion cycle could continue.

The first few months of 2021 have seen a similar deluge of new records – it feels like every week, metal household names are on the release schedule.

However, through the fog, BAEST’s new album Necro Sapiens is a highlight. The album builds on the strengths of their debut record Venenum to deliver a record that somehow delivers all the best parts of European death metal (early Entombed and early Gorefest) with nods to US death heavyweights like Nile and, well, Death.

We caught up with guitarist Svend Karlsson to talk about the record, recording live, and chainsaw guitar tones.

Congrats on the release of Necro Sapiens! How has the reception been so far? Has it been a bit strange putting out a record without going right on tour?

Thank you! The reception has been amazing, we are hitting some really cool charts (top 40 of all albums in Germany, a couple nr. 1 spots in Denmark..). It is weird not touring right away, but we got to play a show the day before the release.

Was there any hesitation on the band’s part as far as putting out a record when you couldn’t solidly tour behind it? I know you initially announced a run of dates that have been pushed back.

We didn’t hesitate, since there’s as been a year of planning behind the release, and everything was set in motion with Century Media, and everyone involved.

Besides, now we have a fresh album to tour with when the world re-opens!

For those who haven’t heard Necro Sapiens yet, how would you say it differs from Venenum? Did having extra time at home due to the lockdowns afford you any time to experiment more with Baest’s sound for this record?

NS is for sure different. But it is still the same Baest. The bigger differences are in the recording method, as we recorded NS live, instead of layering it. (the guitars have always been recorded simultaneously, but the rest of the band followed this time).

BAESt still sounds like death metal, and we are still ripping as hard as we can! The songs have been worked more through this time, since we had 6 months with no touring before recording the album. We have been touring heavily since the release of our EP, so that was nice to try!

You recorded the record entirely live in the studio – how was that experience? Not something you hear as much of any more with metal records.

It was an amazing experience! We really loved being able to listen to a full band after recording a song, instead of waiting for each instrument being finished. That was great for the vibe in the studio!

Could you see yourself pushing to have the time to do the same with your next record, or do you think it’s more likely to be a one off opportunity provided by having so much time to do preproduction on the record?

We are definitely going to do it live again – we will just have to make the time. Simple as that. It was amazing.

Gear wise, what did you use on the record?

Guitarwise, me and Lasse went with our old Gibsons. I’m using a 1984 Gibson flying v, and Lasse is using his GOW Gibson explorer, made to be as an explorer form the same period as my V (hence, they both lack a pickguard = 1984-85 Gibsons).

We used our Peavey amps/EVH amps, and dubbed with the polish MLC – amazing amps. Check them out!

We are still HM2 driven, but tend to blend the chainsaw with a more clean and transparent Peavey distortion.

We haven’t used any modelling amps, and try to stay away from them. We rehearse with our own amps and cabs in the rehearsal space, and ideally, that’s what we want to do live as well. If that’s impossible, we are lucky that an HM2 pedal tends to make any amp sound like a chainsaw. That, also, makes fly in gigs easier!

Is there any piece of gear in particular that you tried recently that you were surprised by, either positively or negatively?

We have been using the Left Hand Wrath pedal from Lonewolf Audio a lot lately – it’s amazing. Especially it’s blend knob works for us – it makes it very easy to blend down the chainsaw, and pull some clarity forward, if that’s desired!.

Are there any guitar riffs or passages on the new record that you’re particularly proud of or enthusiastic about that people should check out?

The outro of Meathook Massacre. Lasse wrote it, and everyone has adorned it since. It’s chaotic, technical, but still groovy and melodic. In the video we are actually recording – so, its kind of a direct look into how we recorded the album.

If someone maybe wasn’t familiar with Baest but wanted to learn to play one of your songs, where would you suggest they start? Any riffs/licks/passages in particular that are fun to play, or maybe challenging but rewarding for more advanced players?

Advanced players should definitely try to master the outro of Meathook Massacre – thats a bitch to play!

If anyone is looking for a fun death metal song to learn, check out Marie Magdalene from our EP of the same name – that’s challenging, but rewarding. And remember; Downpicking sounds best, if you mean it.

I understand that much of Necro Sapiens was actually written (in its initial form) right around the time that Venenum came out – is there already a bunch of new Baest material in the works?

Thats somewhat true. and yes, that also means, that we already have some new riffs ready! And they are sounding really exciting!