Skip to content
You are here: Killer Guitar Rigs > Feature > Capra – “I may have a gear problem that I’m not afraid to admit.” 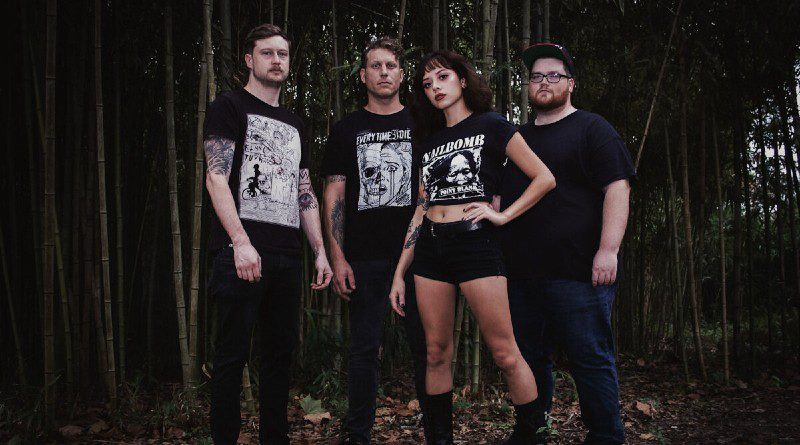 Formed in 2016, Capra were kicking around Lafayette for a few years until they met singer Crow Lotus – and then something clicked.

The band quickly found themselves signed to Metal Blade records and recording their debut record In Transmission, out April 23rd. Produced by Jai Benoit (Golgothan, Father Rust), mixed by Taylor Young (Nails, Twitching Tongues) and mastered by Brad Boatwright (Pig Destroyer, Integrity, Torche, Idle Hands), the record will feel familliar to anyone who lived through the late 90s and early 2000s hardcore and punk scenes – the album cover’s near homage to a certain Converge record should be a pointer.

We caught up with guitarist Tyler Harper to talk about the record, why digital amps are the devil, and how you can’t go back from a good old JCM 800.

How stoked are you to have the record about to come out? Seems like you guys are chomping at the bit to get it into people’s hands? It’s got quite a buzz, even in the super busy release schedule happening right now.

We’ve all been waiting for this album to drop for a long time so we’re beyond stoked to finally see it come to life. All the buzz and reception have been wonderful! It’s amazing to know that our chaos is being received well – but I think it’s the perfect time for it. We’re very grateful for how everything is playing out and all the kind words others have shared with us.

Were you guys at all slow to put out a record right now that you can’t immediately tour behind?

We definitely waited as long as we possibly could with the hopes of touring. The album was finished in December of 2019 and with everything that happened in 2020, holding back until the right time just felt appropriate.

Most bands have a few records under their belt before stepping up to a label like Metal Blade, but In Transmission is actually your debut! How did you get hooked up with the label? How has it been so far?

We’ve been writing and working hard with CAPRA for about 5 and a half years. We started working with Matt Bacon in 2018 and he helped us get our name out there to the people we needed to know. After Chris Santos (owner of Blacklight Media Records) heard us, he took it over to Metal Blade and they ended up really loving our demos and offering us a deal we couldn’t pass up.

I understand the band’s lineup was quite fluid in the initial years but really solidified when Crow joined the band. What was it that she brought to the band that caused that?

When Crow joined the band it was like we were hearing ourselves for the first time. The way we were always intended to sound. She separated us from every other metal band in the world and added a thrashier punk attitude. We always had the chaos and the energy, but she brought the power and emotion. She’s the lightning to our thunder.

How did the band deal with the lockdowns in 2020? Did you end up spending more time on the record than you might otherwise have?

We never stopped writing and rehearsing. We kept working as much as we could and as socially distanced as possible. We ended up adding 3 songs that were written in quarantine to “In Transmission” and are now 6 songs into LP2.

On this album I used an Epiphone Les Paul Custom which I recently threw some God City Slug Jammers into. I also used a Sovtek Mig 100 that was panned left and right and a Sunn Model T right down the middle.

As for pedals, I kept it pretty simple. I was running a Fulltone OCD that I no longer use, MXR Carbon Copy, and a Boss RV-3. At this point, I’ve retired most of this gear and have an entirely different setup.

The only reference records I sent for mixing was Converge “You Fail Me” and Every Time I Die “Hot Damn!” Those two influenced the way that I write and I love the raw aspect that both albums achieve. Not perfect, but perfect, you know?

I’m absolutely a gear head. I may have a bit of a problem that I’m not afraid to admit.

My new setup consists of a 1961 reissue Gibson SG through a 1986 Marshall JCM-800. After retiring the OCD pedal I went on a bit of an adventure trying to find the perfect overdrive that complimented the Marshall and our sound.

The pleasant surprise in this was the Earthquaker Devices Plumes pedal. It’s an absolutely perfect take on the old TS-9 pedals while adding more depth.

The disappointing overdrive was the Pro Co Ratt 2. It absolutely destroyed my sound and as much as I like that pedal when others use it, it wasn’t for me.

Is there any one piece of gear that you couldn’t do without? Anything that’s integral to your sound?

The Marshall JCM-800. It’s the exact tone for this band. I remember playing on one as a teenager and having my mind blown. It had become my dream amp ever since. The Sovtek did it’s job and is a solid amp, but once you play a JCM-800, it’s game over.

Computer amps? On stage? No thanks. I’m not gonna knock on anyone’s choices that make it easier for them but you’ll never catch me without a real amp on stage. Rock and Roll is about power and that’s something you can’t get with a digital amp simulator. I guess my honest take is that I hate it.

For someone who’s just discovering your band and wants to hear more music that sounds like you, what bands would you suggest they start with?

Comeback Kid, Every Time I Die, Converge, Gouge Away, and Oathbreaker.

They’re all super fun to play, but I’d recommend starting with “Torture Ship” or “Mutt” and then work your way up towards “The Locust Preacher” and “Deadbeat Assailant.”

Any local bands in Lafayette people should be aware of, either new bands or older long gone bands that didn’t get the national attention they deserved?

Tons! The Object at the End of History got me into playing music and even though they aren’t around anymore their music is available online. Some others to check out are Golgothan, Radiant Knife, Torture Garden, Shadow People, Dead Centered, and A Hanging!

We’ve been super focused on getting this album out, but we do have a ton of new material that we’re working on for the next album. We’re also discussing a tour later this fall so keep your eyes peeled for that.