Skip to content
You are here: Killer Guitar Rigs > Articles > Do you put EQ before or after compression? 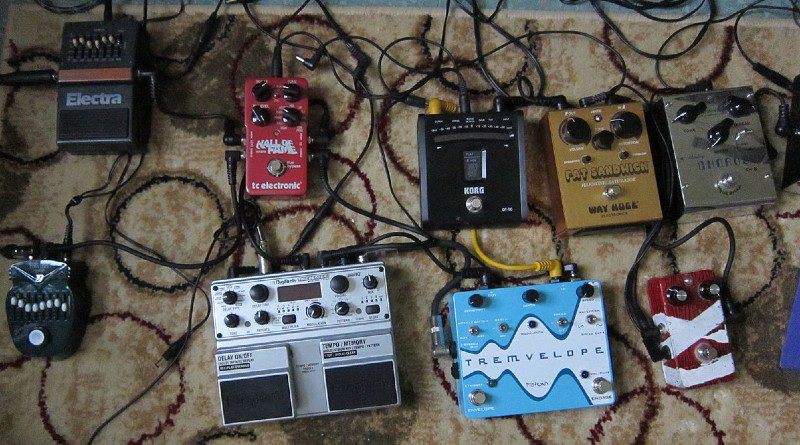 Guitarists are more likely to place EQ after compression. However, this may vary based on individual preference, with no one way being “better” than the other – it’s ultimately a creative choice, and should be backed by an understanding of how the two effects interact with your tone and each other.

Today’s stompbox bazaar is flooded with diverse effects, amplifiers, and noisemakers. Among these, compression and EQ are among the most sought-after stompboxes. While some like them transparent and others love them for the tone color, the truth is that we’re spoiled for choice.

As big and small brands compete for real-estate on your pedal, the prices spiral and features blossom. Considering how cost-effective and accessible pedals are today, it feels like we’re in the golden era of tone sculpting.

Pedal placement is an important aspect of your effect signal chain. Like we’ve said, it’s as much a science as it is an art. And, for the budding novice, we recommend starting with a strong understanding of the fundamentals followed by the requisite experimentation.

In this article, we’ll discuss the placement of EQ and compression on your pedalboard and how they affect the signal chain.

EQ pedals fall under the “tone” subcategory of stompboxes. They are commonly placed between the “dirt” and “modulation” pedals. They are capable of adding noise when you boost different points in the frequency spectrum (and amplifying the noise that is already present).

Today, guitarists can choose between graphic and parametric EQ pedals. Graphic pedals have sliders corresponding to bands that can boost or cut your signal at a specific frequency (range). While their less visual counterparts, the parametric EQ pedals, are built with knobs instead.

Though less visual, parametric pedals offer more control over the “Q” – the width and shape of each band. Some guitarists use them as problem-solvers to cut a rumble or reintroduce mids, while others use them to slam or filter frequencies in an “always on” sound.

However, you’ll find everything from 10-band EQs like the MXR 10-band to parametric programmable behemoths like Empress ParaEQ.

Compressors fall under the “dynamic” subcategory of stompboxes. Wampler Ego and Strymon OB-1 are well-known examples of guitar compression pedals. It is important to understand what goes after and before a compressor and how it influences the tone.

For instance, a compressor before a wah will decrease the range of the original signal and alter the expressiveness of the wah’s spectral glide i.e. relatively meek wah. A compressor after the wah will act as a pseudo limiter and level-off the peaks and spikes in the filter sweep.

The general pedalboard mantra for compressions is “comp first, except after wah”. Additionally, compressors tend to add or amplify noise. If you place them later in the signal chain, they’ll amplify the noise of everything that precedes them.

Guitar Pedalboard: Should I put EQ before or after compression?

Running Comp to EQ in your pedalboard is slightly more common than doing it the other way around. This allows you to take a relatively even signal (due to compression) and using the EQ to fine-tune it or adjust the frequencies. The compressor pedal will reduce the signal’s dynamic range and then you can cut/boost to fine-tune it.

Running an EQ’d signal through a compressor will diminish the impact of EQing when the dynamics are reduced. In simple words, the EQ is less noticeable because the boosts may get “squished” by the compression. This also diminishes the possibility of using EQ as a “big picture” tone shaper. You can only achieve that with “comp first” and EQ placed late(r) in the signal chain.

Does the order really matter in a pedalboard?

As you explore how to organize your pedals, you’ll realize that order can play a pivotal role in achieving the tones you want. This sequence is the foundation of your effect signal chain. While it is flexible, you should be aware of the basic flow. Here is a brief pedal placement guide:

Flaunt it or fault it, pedal positioning only requires you to be aware of these recommendations. At the end of the day, they are just guidelines masquerading as golden rules. You are free to experiment and change it up to sculpt the tone that you desire.

Conclusion: EQ after compression, except when you prefer not to.

I recommend EQ after compression based on the fact that EQs tend to add noise and compressors tend to boost it. If the compressor is after the EQ, it will also change the boost and cuts in frequencies.

Incidentally, overdrive is one of the biggest reasons why EQ commonly goes after the compressor. Guitarists love the iconic tones derived from EQ tweaks after dirt pedals.

Let us take the Comp-OD-EQ trinity to demonstrate this. If you run a compression to overdrive to EQ, you can use it to add some oomph for your solos (i.e. mid bump or scoop). Or, you can run a compressor to EQ to overdrive, if you want fat and clipped rhythm tones.

The point I’m making is that you’ll have to visualize the role of these pedals in the overall context of your rig.

Either way, experimenting with the arrangement is the key to finding the right placement for these two stompboxes. This will also articulate how your units will process and affect your signal. Like many guitarists, you may find that running EQ to Compressor and Compressor to EQ is equally desirable in different musical contexts.

In fact, it isn’t uncommon to see an EQ’d signal into a compressor with a second “corrective” EQ pedal after it. Nevertheless, that is more pertinent to how audio engineers use EQ as opposed to guitarists. Plus, it also comes with the burden of owning more than one pedal.

We hope our guide was of use to you, and you stick around to see more! We are a reader-supported website that depends on your pro-active actions to sustain these free guides and resources, so feel free to share this article with your friends.

Follow us on Instagram (@KillerGuitarRigs) and Facebook for regular updates regarding all future gear guides and product reviews. Before you leave, check out some of our other trending buying guides and reviews: