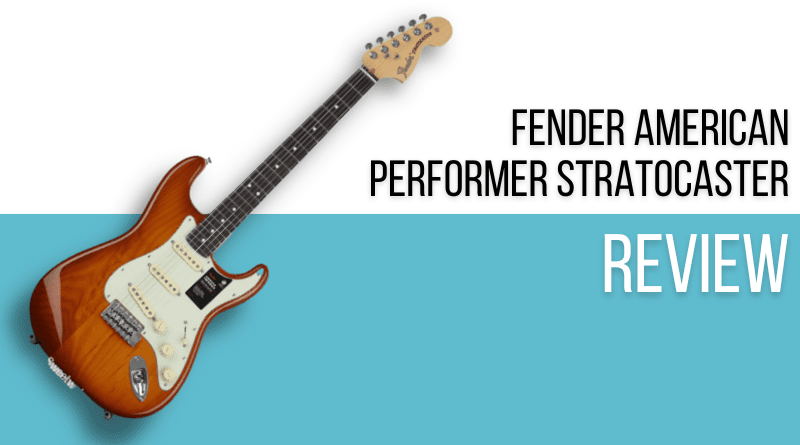 Despite the fact that import guitars continue to get better every day, for some, there’s just still nothing quite like owning a classic guitar with “Made in the USA” stamped proudly on the headstock.

In this KillerGuitarRigs Review, we were given the chance to spend some time with, and review, the most affordable version of one of the most iconic US made guitars of all time, the Fender American Performer Stratocaster.

With this being the entry level US made model, it’s undoubtedly one of the most popular, too, so we really wanted to find out whether or not you should invest in the American Performer, or perhaps save some money on a MIM model. Keep on reading to see what we thought.

The Fender American Performer Stratocaster is effectively the US made version of their MIM Player Series model, but with an extra digit in the price tag. Still, at under $1500, it’s still an attainable option for intermediate players looking for a serious guitar, as well as professionals who need a reliable instrument for stage and studio.

Being from the Coronado plant, it’s subject to Fender’s highest quality control standards, and is made with more premium materials and parts than you’d find on imports, which not only justifies that additional cost somewhat, but it also helps to improve the residual value of the guitar on the used market should you ever sell it.

We received a beautiful Honeyburst example for this review, and it really looked fantastic. The burst itself was quite subtle, but it paired beautifully with the mint pickguard and off white knobs, switches, and pickup covers.

The range of colors available in the American Performer lineup was a little disappointing. In the SSS configuration, there are only 3 choices available – the Honeyburst that we received, Satin Lake Placid Blue, and Arctic White. Fortunately, all are quite nice, but more options are always better.

Our test guitar came with a beautiful rosewood fretboard. If you prefer a maple board, you will need to opt for the Lake Placid Blue finish, though. The neck was maple, which is typical for a Strat. It had the modern C profile, which is one of our favorites on any guitar at KGR. It’s slim and comfortable, and works well for almost every player.

It’s equipped with 22 jumbo frets, which were very comfortable, and were finished beautifully, with perfectly beveled edges and well polished crowns.

The body was made from Alder, which is the predominant wood used by Fender today, on everything from the Mexican made Player series, to US made models like this. Even though ash, when it was in more widespread use, had a nicer aesthetic, we found the grain pattern showing through the finish to be really pretty. Being an American made model, there was no veneer, so what we were seeing was the real wood, too.

The tremolo system was the vintage style 6 point design. It was good, but not quite as good as the 2 point setup found on the next model up in the series, the American Professional. If you’re a big trem user, this is worth noting.

It had 3 single coil Yosemite pickups, which use both Alnico II and Alnico V magnets, and have adjustable pole pieces. The middle pickup actually features reverse winding, too, making them exceptionally resistant to unwanted hum. For a wide range of tones, it features a push pull pot on tone 2, which gives access to all 3 pickups, or bridge and neck together, 2 positions not found in a standard Strat setup.

Finally, one of the most interesting innovations on the American Performer is the Greasebucket tone circuit, which reduces treble when you roll back on the tone, but it doesn’t increase bass frequencies, which keeps tones much clearer.

After first picking up the American Performer, we were impressed with the feel. The weight was just about perfect for a Strat. Enough heft for sustain, while being light enough to hold for extended periods.

Ergonomically speaking, it was a real treat to play. The modern C neck was as comfortable as we’d expected it would be and then some. The finish on the neck was amazing, and really let our hands glide without resistance.

The radius on the fretboard was 9.5”, which is pretty common on Strats. We found that it let us play expressive and creative lead lines, but it doesn’t cause any discomfort for rhythm guitar either, and seeing as the Strat is often used by both styles of player, it’s probably the perfect radius to use.

The Yosemite pickups were a lot of fun to play. They gave us fantastic clarity and punch in all positions, and because of the adjustable pole pieces, they were hugely versatile too. As briefly mentioned, they had a total of 7 different positions thanks to the push pull tone pot, which really opened up new possibilities.

We found that the Greasebucket Tone Circuitry worked really well. We typically avoid rolling back the tone on Strats as they have a tendency to become muddy, but with this setup we retained the clarity, while taking the edge off the bite.

In the 2 and 4 positions, we were treated to some fantastic quack, with the out of phase tones delivering some beautiful blues and rock tones. Played clean, the neck position was warm and surprisingly full sounding for a single coil, especially with the tone rolled off.

In the bridge position we got some brilliant, throaty lead tones that really captured the essence of what the Strat should be all about. Tonally speaking, the American Performer delivered everything we’d expect of a high end Strat and more.

The hardware was all really high quality. The vintage style tuners worked perfectly, and looked excellent. The trem system was well made, but not quite as responsive as the newer style 2 point found on the American Professional.

The Fender American Performer Strat might be the most affordable US made version, but it still costs enough that you should perhaps consider some alternatives before jumping into a purchase. Here are some great options to look at.

The price difference between the Performer and the Professional is quite minimal in the scheme of things, and there are some tangible benefits to upgrading. First, it’s available in 9 different finishes, vs 3 on the Performer, plus, it comes with the fantastic 2 point floating bridge. The pickups on this guitar are phenomenal, making it a great alternative if you’re set on a Fender.

If you’re not dead set on an American made Strat, this Japanese made JV Modified model comes in at a similar price, and offers a more traditional setup in terms of electronics. This is great if you’re looking for an old school Strat look, feel and sound. It’s Inspired by the vintage reproductions made in Japan in the ‘80s, and it’s one of our favorites in this price range.

The Fender American Performer was a lot of fun to play. The pickups were genuinely excellent, and the huge range of tones we got thanks to the upgraded electronics were all amazing. It was well articulated, and gave us crystal clear tones, with a bright, shimmery top end. Build quality was absolutely impeccable, and we have no doubt that any guitarist, professional players included, would be happy to add one to their collection.