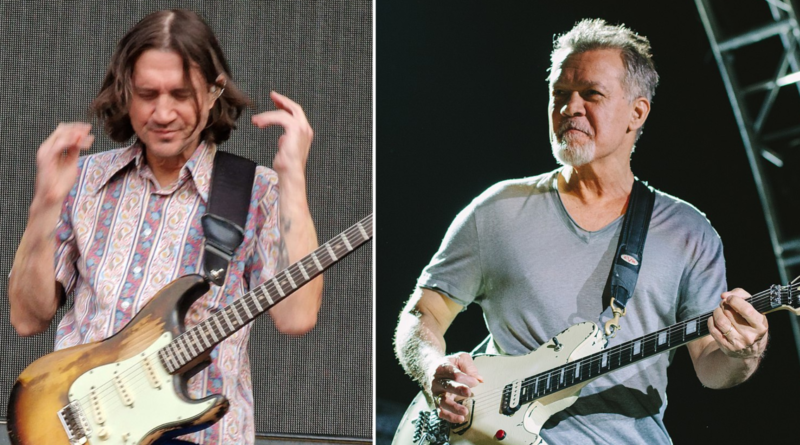 In an interview for the latest issue of the Guitar Player magazine (via Guitar World), Red Hot Chili Peppers guitarist John Frusciante looked back on the recording process of the band’s two recently released albums, “Unlimited Love” and “Return of the Dream Canteen.” In particular, Frusciante discussed the solo for “Eddie,” a song done in tribute to Van Halen guitarist Eddie Van Halen.

As he reveals, the solo was difficult to come up with and record. The resulting piece combines some of Eddie’s elements while John also kept true to his own signature style. He explained:

“When we’re in the studio and between takes, I’m always doing things, like two-hand tapping. The engineer hears it all the time; I’ll play really flashy stuff during breaks. But when it comes to recording, I’m doing what I think is right for the song, and in most cases that doesn’t involve playing really flashy. But it is something I enjoy.”

“Doing that solo was a mind fuck, I’ll tell you that. And it was the last solo that I did out of all the solos on the 48 songs we recorded.”

Further on, he adds that he even considered giving up on the solo entirely. Nonetheless, he eventually came back to it and the song features his final take. Frusciante said:

“I was trying for a while, and I wasn’t happy with anything I was doing. I was either going too far in the Eddie Van Halen direction, to where it was too busy and there was too much two-hand tapping and it didn’t sound like me, or I was just doing it and it only sounded like me… in a song about Eddie Van Halen.”

“I stopped being self-conscious about the idea that the song was about Eddie Van Halen and just did what was natural. We were recording, and I took maybe a 15-minute break. And when I came back in, I just did the whole thing, like I said, in one take.”

Elsewhere in the interview, he also added:

“There are also the parts of his style that don’t involve playing fast, that are just really exciting to me – playing in a way that feels spontaneous, or when you hear feedback because he recorded his parts in the same room as his amplifier. To this day, those things give me chills.”