Skip to content
You are here: Killer Guitar Rigs > Articles > What delay does David Gilmour use? 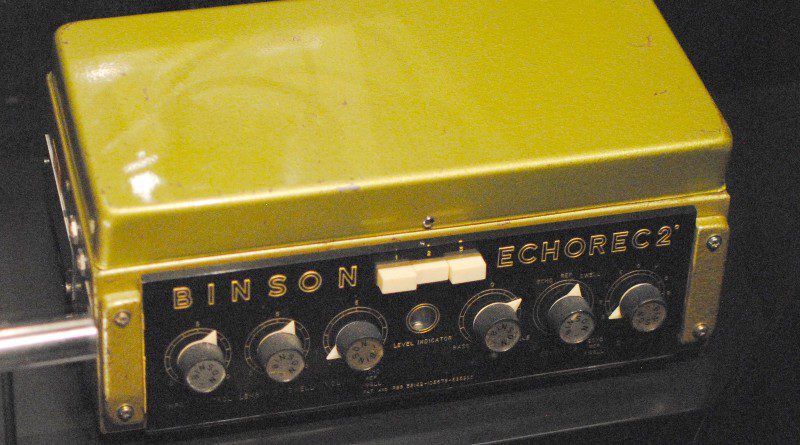 David Gilmour is known for using his delay creatively, mostly by sort of using it as a reverb instead of it being purely an ‘echo’. This is a big part of Pink Floyd’s sound. But which delay pedal(s) does/did he use?

David primarily used the Binson Echorec delay/echo unit for his early work with Pink Floyd. A little later he switched to the MXR Digital Delay. This pedal was a little easier to use than the Binson, and it’s the exact delay you can hear in ‘The Wall’. The third and final (that we know of) delay he usd was the TC Electronic 2290 rack unit (also check out our picks for best delay pedal).

A brief history of David Gilmour

David Gilmour was the guitarist for English rock band Pink Floyd. Pink Floyd is known for their use of soundscapes and textures that would later characterize genres such as progressive rock and psychedelic rock. Pink Floyd is deemed as one the all-time best bands to ever exist on this planet. Both in the studio and live their musicality seeps from every note, every rest, and every beat.

David Gilmour, as many guitarists will agree on, is an absolute legend. He’s got the sort of ‘guitar-god’ charisma that comes with his insane talent. His talent doesn’t just limit to his skill, but also to his creativity. It’s not rare to see Pink Floyd play 10-minute long solos over what can only be described as ‘atmospheric’ playing from the band. From long sustained notes that seem to go on forever, to the most tasty of blues licks, his sound is instantly recognizable.

This obviously means that a lot of guitarists want to be like him. They want to play and sound just like the man himself. One of the ways to do that, is by using your effects creatively, just as he does. The most recognisable and somewhat stereotypical sound that Pink Floyd uses is their ambience. A large part of that comes from David’s use of delay. As I said before, he often doesn’t just use the delay to make his solos fit in the particular vibe of the song, but also the help build the rest of the soundscape.

Getting Into The Gear

The specific delays he used were as I said the Binson Echorec, the MXR M-113 Digital Delay, and the TC Electronic 2290. I go a little in-depth for all three of them, and I’ll give some tips on how you can emulate his sound.

The Binson Echorec is an analogue echo unit made by Binson in Italy. It’s a famous echo unit used by many artists, and useful for varying instruments. He set the time to 310ms for most everything. It’s a core part of Pink Floyd’s earlier sound, and not just for David’s guitar. Many of the sound effects you’ll hear on the earlier albums were created with this machine.

Getting an original Binson Echorec these days is nearly impossible. They’re so famous they sell for a very high price and are deemed a collectable for many. On Reverb, the average Echorec sells for between 3500$ to 5000$. But fear not, if you want a semi-authentic Echorec experience, Catalinbread makes an Echorec pedal that sounds very close to the original. It’s not a cheap pedal (around 250$ new), but it’s way cheaper than an original.

The second delay David used was the MXR Digital M-113 Delay. It is said that he switched from an Echorec to an MXR for ease of use. It’s more compact, more reliable, and just easier to use. Tweaking the delay time was simply more tweakable on the MXR Digital Delay. As technology was progressing, the use of rack effects units became more and more efficient.  This unit can also be heard on the ‘The Wall’ album. He usually had the time set to 440ms.

His final delay was the TC Electronic 2290. This unit is an incredibly versatile digital delay that many artists use. It’s more modern than the MXR, but it sounds just as good. a`It’s very reliable, just like the MXR, but it’s much more versatile and teachable. It’s also easier for live situations as changes can be made on the fly.

Getting the Gilmour Delay

Digital Delays tend to be avoided by many guitarists, but the belief that ‘analog is always better than digital’ stems from when digital gear wasn’t very good. It also stems from the fact that people tend to look at things with their wallets, and analog gear is often much more expensive than it’s digital counterpart. But to sum up, both these digital units sound amazing, because if it didn’t David Freakin’ Gilmour wouldn’t be using them.

If you want to somewhat recreate his delay you’re in luck, as it’s pretty simple. Just get any old delay pedal, analog or digital, and set the time slow. Use the feedback option to set it right where you think it sounds closest. It’s hard to give an estimate as every pedal will respond differently. And lastly, you’ll want to mix it surprisingly quietly. You might be tempted to make it ear piercingly loud, but trust me on this, a little goes a long way, especially when playing with other people. And what I meant with ‘using it as a reverb’ was that he tends to tune his delay to the rest of the band so that it creates a cohesive piece that captures their signature atmospheric sound.

But delay is not the only effect that Gilmour tends to use. He is also known for using the legendary Proco Rat and MXR Phase 90. These effects combined with Gilmour’s guitars, amps, and more importantly, his fingers, all add up to the legendary sound we love, and the signature sound that will send any 40+ year old into a state of ecstasy if it comes on the radio.

All these effects can be heard in most of Pink Floyd’s discography. The delay was such an integral part of their sound, then almost any Pink Floyd song wouldn’t sound complete without David’s signature delay sounds.

Pink Floyd’s and Gilmour’s music is timeless, and the albums are a must-listen for any musician who wishes to define and expand genres. I believe that every music school should analyse Pink Floyd’s music, as there’s so much to learn from it.

Want to get one email a month from us?

Gatecreeper – “We kind of did a split release with ourselves”

Gatecreeper are known for their sometimes sludgy “stadium death metal” – so the surprise release of a half dozen grindcore songs (plus one funeral doom dirge) came as a shock to many. We caught up with The Darkest Cowboy (guitarist Eric Wagner) to talk about their new release, An Unexpected Reality.

What is the Woman Tone? How to recreate it on the guitar?

What Overdrive pedal does Steve Vai use?

What wah pedal does Kirk Hammett use?

How often should I change my guitar strings?