Skip to content
You are here: Killer Guitar Rigs > News > Elvis’s Hagstrom Viking II from his “comeback special” actioned for $625,000 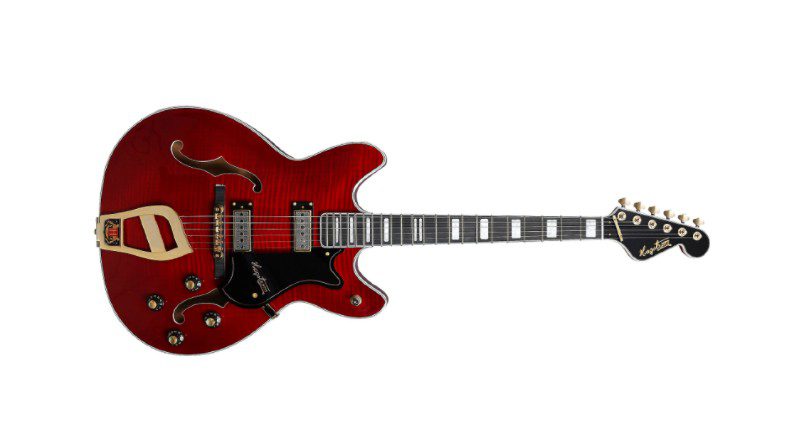 While not the highest price paid for a classic guitar, Elvis’s iconic red Hagstrom far outpaced the $250k opening bid, landing at a final price of $625.

The guitar was actioned off on March 27th by Kruse GWS Auctions as part of their Artifacts of Hollywood & Music auction. The lucky winner outbid six other interested parties to come out the new owner of one of Elvis’s best known instruments.

The guitar was last seen in public some 25 years ago when it last changed hands. It’s most famous outing of course was Elvis’s December 3rd 1968 concert, his first in over seven years.

Elvis had spent the intervening years launching his movie career to mixed success. Frustrated with what he saw as shoddy low budget productions, and concerned that music was moving on without him, Elvis struck a deal with NBC to air “Elvis”, one of the most famous TV concerts of all time.

The Hagstrom that opened the show on his shoulder had originally belonged to Al Casey from Elvis’s band, but the producers of the show thought it would look better front and center, and so it became one of his most recognizable instruments. A notarized letter of authenticity from Casey came along with the auctioned instrument, as well as several other notes including a letter from Bones Howe who was the original producer of the famous special, as well as documents from the Rock ‘n’ Roll Hall of Fame and Museum, which had been the guitar’s sometimes home.

It’s been a bumper few years for auctions of classic guitars. Just last year Elvis’s “Sun Sessions” Martin D-18 was sold for $1.32m, but that pales in comparison to John Lennon’s Gibson J-160E which sold for $2.4mm, David Gilmour’s black strat which sold for just shy of $4m.

Of course, at the time of writing, the daddy of them all is Kurt Cobain’s Martin D-18E, used on stage for the band’s MTV Unplugged appearance. When the hammer finally fell last year at Julian’s Auctions, the final bid sat at an incredible six million dollars, purchased by Australian businessman and owner of RØDE Microphones, Peter Freedman.