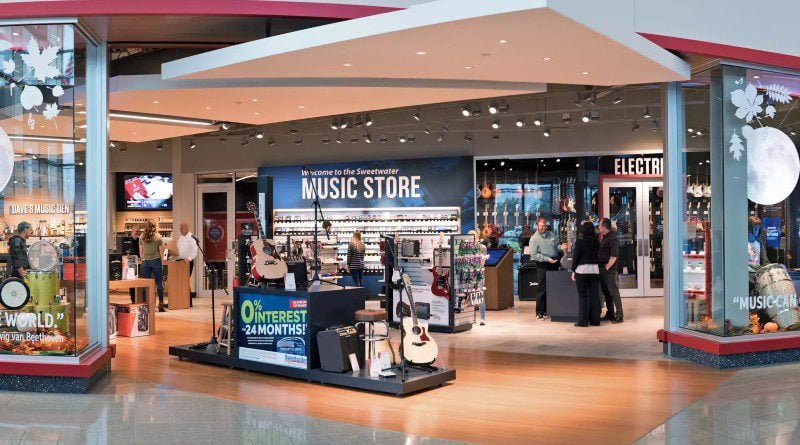 Never heard of Sweetwater? Wondering if it’s safe to order from Sweetwater? Not sure if your stuff will show up, or if they will be helpful in the event of a problem?

Fear not – with Sweetwater, you’re in good hands.

So cut to the chase – Is Sweetwater Legit?

Bottom Line: Yes. Sweetwater is the biggest online musical instrument retailer in the US, serving millions of customers a year, and have top ratings on all review sites. You should have absolutely no reservations in ordering with them.

They have a 4.47 rating on SiteJabber with (at the time of writing) 684 reviews. They rate 1st for music equiptment sales, and get top marks for service, value, shipping, returns and overall quality. They have 82.7% positive reviews for the last 12 months, with comments like “hands down the best customer service in the music gear industry”, and “my sales engineer is knowledgeable about every aspect of pro audio and never pushes me to buy anything”.

They have a 4.7 rating on Trustpilot with (at the time of writing) 594 revirews. 89% of customers rated them “excellent” overall, with recent reviews praising the sales staff, and commenting that even “hard to find” items were in stock.

They have a 100% Trustscore on Scam Advisor, based on over twelve thousand reviews. They have zero negative highlights – zero!

They have a 4.9 rating on Google Reviews, based on over eleven thousand reviews. Google lists as highlights the fact that they have on time delivery of over 90%, accurate and undamaged orders of over 95%, with 94% five star reviews overall.

ResellerRatings gives them 9.51 out of 10 based on 1431 reviews (at the time of writing), noting they have 95% five star reviews. The most recent review there when I looked started with “Nobody compares to Sweetwater when it comes to customer service“.

By the way, you may also like some of our newer posts, including our guide on how to learn guitar online for free, as well as our full range Fender Modern Player Telecaster review.

Sweetwater are the largest online and second largest overall musical instrument retailer in the US, which is no mean feat considering they only have one physical store compared to number 1 Guitar Center who have 269.

What are some of the reasons to buy from Sweetwater?

They Have Almost Literally Everything

Sweetwater has an incredible inventory covering guitars, amps, pedals, speakers, plus basses, drums, keyboards, all the way through recording gear and even live sound and lighting gear.

In fact if you sign up for Sweetwater’s mailing list, they will send you out a regular catalog of over 600 pages of amazing gear. You’ll never again have to be bored on the commode when you can sit and dream of owning a $25k Les Paul, or a $250 Schecter if that’s more your style.

They Inspect Every Guitar

Ok this is killer – Sweetwater have a 55 point inspection that they do of every instrument before it goes out the door. Ever gone to your local big box guitar store and almost had your fingers ripped off by rough fret ends? With Sweetwater, your guitar basically gets a setup before it arrives at your door.

Their Sales Team are Killer

When you buy from Sweetwater you are assigned a sales engineer. Your engineer will answer any and all questions you have, giving you honest answers (my engineer has talked me out of so many bad puchases) and following up to ensure you have no issues. Plus you can ask them for discounts, which is something you can’t do with any other online retailer.

With the Sweetwater Credit Card via Synchrony, you can get amazing financing on a ton of gear, typically at 0%. For example, I once bought a $2300 guitar that was only $48 a month on their 4 year 0% financing. It makes gear so much more affordable, and since there’s no interest, you’re not paying anything extra.

They have a “no hassle” return policy that means you can return anything within 30 days for any reason. Don’t like the color? No problem. Realized you can’t afford it? No problem. Spouse found out you spent $2300 on a guitar? No problem.

2 Year Warranty On All Instruments

Sweetwater offers a 2 year warranty on everything, to cover all parts and labor costs on anything you buy from them. It doesn’t hurt that they have a huge number of techs onsite and turn around repairs lightening quick.

Who is the owner of Sweetwater? Is Sweetwater owned by guitar center?

Nope, Sweetwater was started by and is still owned by Chuck Surack, whereas Guitar Center is owned by Ares Management, which is literally a billion dollar “private captial management” firm.

How long does it take for Sweetwater to deliver?

Sweetwater’s free shipping typically takes two to four days for small items and one to five days for larger items.

Does Sweetwater have a store?

They do actually have one store that is run out of their main 166 acre facility in Fort Wayne Indiana.

Does Sweetwater have coupons?

No, Sweetwater does not do coupons – even though some sites would have you believe they have coupons. In reality, you can usually get a killer deal on any item of gear from Sweetwater by… Asking!

Does Sweetwater deliver to Canada/The UK/Europe?

Does Sweetwater do price matching?

On select items, yes. Call Sweetwater or email your sales engineer and they will get you started.

You can absolutely ask your Sweetwater rep if they can do anything on the price on an item, and in many cases they do have some leeway. There are situations where specific retailers do enforce a strict rule on maintaining the advertised prices, but for many many items, your rep will be able to work with you on price.

When are Sweetwater sales?

Sweetwater have sales for all major holidays, as well as their annual GearFest event, wherein they have different items on sale every day.

Even when it’s not sale time, they have a ton of stuff available at reduced price in “the deal zone”.

So what are you waiting for? Go check it out!