Skip to content
You are here: Killer Guitar Rigs > Feature > My Kid Brother – “We have a lot of cool stuff coming” 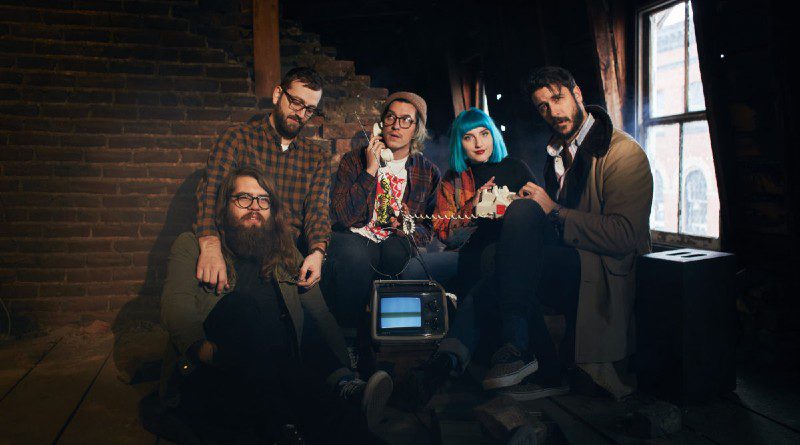 It was almost a whirlwind couple of years for My Kid Brother.

While the core of singer/guitarist Christian Neonakis  and drummer Sam Athanas had been playing together on and off since 2015, it wasn’t until October of 2018 that the lineup (including Piano Whitman [keyboard, vocals], Dylan Savopolous [guitar], and Richard Smith [bass]) was cemented.

Building on a solid local following, the band quickly signed to Fearless Records in 2019 and found themselves in LA doing day sessions with a multitude of producers and songwriters culminating in the self titled debut EP.

And then 2020 happened. Plans ground to a halt… But not completely. The band have spent much of the year writing and recording, and putting together plans to spring into action when the world reopens.

We caught up with singer/guitarist Christian Neonakis to talk about writing sessions, semi hollow guitars and getting back on the road.

First off the good stuff – tell me about the gear you used on your newish self titled EP! Was it mainly your regular everyday gear or were there additional bits of studio or rented gear used?

The gear that we used from my live setup was a Fender Deluxe Tube Amp, a Fender Tuner Pedal, a MXR DynaComp, an Ibanez Tube Screamer, a Holy Grail Reverb, an Xotic EP Booster and I used my Ibanez Semi Hollow Body guitar and my Fender Stratocaster. From the studio I used some of their fuzz pedals, a baritone electric guitar (I don’t remember the company that made it) and a 72 Fender Telecaster.

How was the recording of the EP different to recording your debut LP Baltimore Street Rat?

When we recorded Baltimore Street Rat we were going to the studio a few times a week over a few months. When we recorded this EP, the producers flew in from LA and we recorded it in one week. We slept in the studio and recorded for usually 12 to 15 hours a day. The Ep was different as well since it was the first time that we ever worked with producers who were helping to co write certain parts of the songs.

You’ve been with Fearless for around a year now – what are the plans as far as getting a full length out on the label?

I think right now we’re trying to plan around Covid and what that means for playing live shows. A full length is definitely coming, we just aren’t sure as of the timeline just yet.

I understand that prior to recording the EP, the label sent you to work with a couple of different producers before landing on the Partybaby boys – how was that process? Any eye-opening experiences as far as how the industry works? Would they still be the choice when it’s time for the full length?

It was a really new experience. Writing and workshopping with really talented and creative people was humbling. Each day we would go to a new studio and work with new producers. I learned something new each day and met some really awesome people. We landed on Noah and Jamie from party baby because we really liked their take on our songs. It was a fresh new way to look at them and they were just really fun people to work with. Who knows what will happen when we get ready to record a full length album, but I would absolutely love to work with them again!

My Kid Brother’s sound is quite dense, especially on songs like Daydream – how do you approach fitting two guitars into the band’s sound? Do you have a set role for each guitarist, or is it approached on a song by song basis?

It’s definitely a song to song basis. I really enjoy Dylan’s approach to writing guitar parts for the songs and it always seems to fall into place well. We are all very honest about each piece of every song, so if something doesn’t fit or seem right, we discuss it and find a solution.

Do you plan your guitar tones to complement each other at all, or are you each using what comes naturally?

Since I sing I tend to play mostly chords, so my tones usually are set up to bring body to the songs. Dylan has a larger range of tones and he changes them to fit the feeling of each part of every song. Since he has been learning how to record on his own in the past few years, he has a good understanding of how to set his tones to fit into the music without clashing.

How has the band dealt with the shutdown this year? Have you been keeping busy?

I think we dealt with it the best that we could. Not feeling defeated, but trying to find new ways to engage with listeners and provide content. We have been doing a lot of songwriting and recording on our own, which has been really cool. We also have been making our own music videos and other random content to keep people engaged. We have a lot of cool stuff coming so stay tuned!

What are your plans for the band once things reopen? Back on the road? Or focus on getting an album together?

Both! We are so eager to tour and play shows again, that I feel like that’s going to come first. In quarantine we have been writing a lot, so I imagine another album will come soon after.