Skip to content
You are here: Killer Guitar Rigs > Interviews > Vatican – “I pull from Meshuggah and Ben Folds when I write” 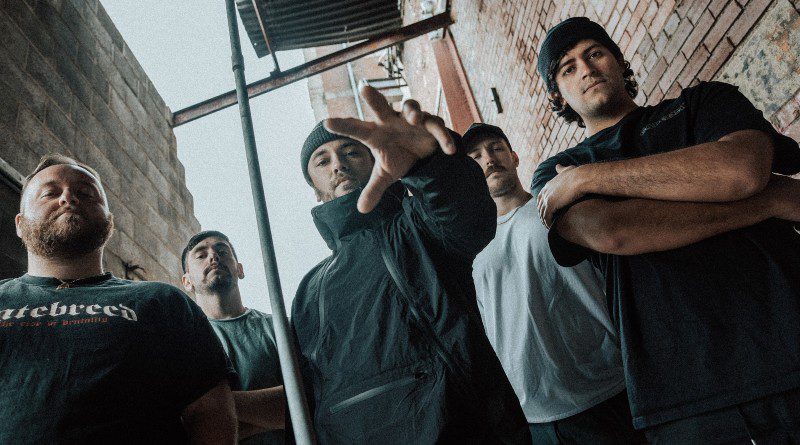 Freshly signed to UNFD (Home of Silverstein, Stray From The Path, Frank Iero and more), Savannah’s Vatican have just released a double A-side single, Become A New God, and are getting ready to hit the studio with Randy Leboeuf at Graphic Nature Audio to record their second album.

We caught up with guitarists Tom Lovejoy and Nolan Mobley to talk about the new release, Resident Evil Village, and skipping school to learn guitar covers.

Vatican recently signed with UNFD – can you tell me about how that came about?

Nolan: We had a few different labels express interest, but none of the offers seemed ideal or felt like that was where we needed to go. We spoke with UNFD for months and had only heard good things from others who have worked with them. They were so great that I was expecting there to be a moment of “oh that’s the catch to all of this.”

They’re a sick label and we’re grateful to do some shredder shit under their flag.

How did the band deal with the lockdowns in 2020? I understand you guys spent a lot of time writing?

Tom: We weren’t able to be public about anything we had going on in 2020, but we were busy. A lot of time writing, searching for our new vocalist Mike, and working on a remix version of our last record that should be out soon.

A big thing for me was learning more about production. I do a lot of the synths and ear candy stuff in our music, so if I wasn’t writing riffs for the new songs I was working on sound design elements. I learned my way around stuff like Serum, Vital, Massive, and some hardware Korg stuff.

Nolan: We still got together regularly at a secluded house that we had access to. And I mean no internet access level of secluded.

I struggled with being home and not having enough to do with myself. It was a struggle to get to the other side of things, but we kept churning out songs and also went harder on trying to recreate the visual representation of the band, along with pretty much every other aspect too.

So guitars! What did you guys use on the new songs in terms of guitars/amps/pedals?

Nolan: Tom and I both play an ESP EC-401, but we used his, which has Lace Drop & Gain pickups in it. We actually tracked DI with our legendary friend Pat Snyder, but I’m sure Tom has more info on how the tracks were re-amped.

Tom: Randy Lebouf re-amped our tracks when he mixed the songs, and I believe the amps were a blend of a 5150 III and a 5150 II. Effects are a mix of pedals and in the box stuff. There’s some super low octave stuff that was done with an EHX Pitch Fork, and some of the more affected sounds we’re done with plugin’s like Valhalla Shimmer and Fab Filter’s Simplon.

We also used stuff like an MXR Blue Box, a Boss DD6, and a Darkglass BK7 on most of the softsynth sounds to give them a little more character.

Did you have any reference records going into recording in terms of how you wanted the finished product to sound?

Nolan: It used to be a struggle for any of us to have references that sounded even close to the same. The band’s sound has really come together over the last year and I’m sure we’d all say a Gojira or Meshuggah record for an overall consensus, but Mick Gordon’s DOOM soundtrack had a lot of moments that got us excited to try new things production-wise.

Honestly though, we didn’t even give Randy any references on this mix. We just trusted him and he crushed it with only a few notes from us.

Tom: I like gear but I never really bring any nice or interesting stuff out with this band because it’s just going to get beat up and destroyed. I won’t play a guitar worth more than $600 live anymore. Honestly my favorite piece of gear is a .73mm Jazz III. Switching to those picks cleaned up a few issues in my technique.

Nolan: I’m back on the 5150 III now and can’t see myself switching from it. I’ve tried an older AxeFX model that really just couldn’t deliver the same feel as an actual amp and then moved to a Mark IV from there.

The Mark IV is a little bit too touchy and maybe offers too many options in my opinion. Some days I would get the tone I wanted and other days it would just have to be good enough. Tom prefers lower gain, but I like my tone maxed out with gain. The machine sounding crunch when you palm mute has always been my shit.

Is there any one piece of gear that you couldn’t do without? Anything that’s integral to your sound?

Tom: I always need a tube screamer style pedal in front of my chain. Even though it’s debatable if some modern amps still need a boost on the front end, I’m just so accustomed to the sound that everything feels strange if it’s not there.

Nolan: I started using the ISP Decimator G-String II a couple of years ago and with our sound becoming a lot tighter, I absolutely need that pedal to keep things tight live. No other noise suppressor has been able to keep it in the sweet spot like that one does.

Nolan: I’m not opposed to it at all. Car Bomb is one of my favorite bands and I admire what sounds Greg can make with his amp sims. The future of guitar could potentially be creating sounds with your guitar that aren’t guitar sounds and that’s exciting to me. We dabble in sounds without effects, but as that progresses, I could see us jumping into the world of digital amps.

Tom: I love stuff like the Helix, Axe-FX, and Kemper. I’ll always be a tube amp guy in the studio, but for shows I can see myself moving to a digital system soon. Like I said earlier, my gear gets so beat up on tour that I’d rather take the simplest system possible than worry about having a bunch of unique pedals or a tube amp that has perfect dynamics.

For someone who’s just discovering your band and wants to hear more music that sounds like you, what bands would you suggest they start with?

Nolan: I feel like it’s getting harder to place our exact sound amongst other bands, but if you like heavy music in general Vomit Forth and Despize are two of the coolest bands making heavy music right now.

Tom: There’s only like, five things I pull from when we write. Meshuggah, Mick Gordon, The Dillinger Escape Plan, Gojira, and Ben Folds.

Nolan: If you’re in high school and skip 60 days out of the year to sit in front of your computer and learn guitar covers like me, then I’d say Blades in Sepia or Beneath One are fun to run through and have some parts that get me pumped up to play.

Fractured God‘s first riff will definitely push your skills, just like everything else we’ve got coming out on the LP. There’s plenty of shred moments, but I’d say we try to keep it dialed back enough still that it’s fun to listen to.

Tom: Fractured God has a few sweep parts and a half whole diminished solo that would be a good place to start with some more “advanced” techniques and concepts.

What’s up next for the band? Is there a full length on the horizon?

Nolan: We hit the studio in about a week to track our 2nd LP with Randy Leboeuf at Graphic Nature Audio. I believe we will be dropping some singles from that throughout the year and ideally we would like to have it out next Spring!

We caught up with guitarists Tom Lovejoy and Nolan Mobley to talk about the new release, Resident Evil Village, and skipping school to learn guitar covers.